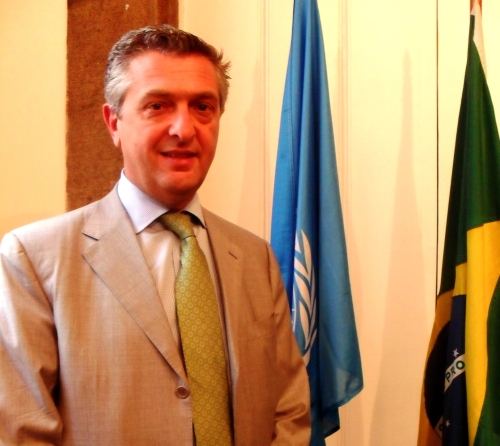 Brazil is the BRICS country that has done the most for Palestinian refugees, says Filippo Grandi. Credit: Fabíola Ortiz/IPS

RIO DE JANEIRO , Aug 21 2012 (IPS) - The policy of pacification of Rio de Janeiro’s violent favelas, or shantytowns, could serve as a model in some respects in Palestinian refugee camps, says Filippo Grandi, commissioner-general of the United Nations Relief and Works Agency (UNRWA) for Palestine refugees, in this interview with IPS.

Over the last year and a half, Brazil has provided 7.5 million dollars in aid to UNRWA, the Italian diplomat said during his official visit to this South American country on Aug. 13-17, where he visited São Paulo, Brasilia, Porto Alegre and Rio de Janeiro.

In April, Brazil hosted U.N. Under-Secretary-General for Humanitarian Affairs and Emergency Relief Coordinator Valerie Amos, who was seeking support for operations in Haiti, Africa and the Middle East.

Fabíola Ortiz sat down with Grandi in Rio de Janeiro to discuss Brazil’s cooperation with UNRWA. Excerpts of the interview follow:

Q: The UNRWA budget depends on international donations. How has it been affected by the financial crisis?

A: UNRWA costs about 1.2 billion dollars a year, of which approximately half constitutes our core work such as education, health and poverty relief. Unfortunately every year we have a chronic under-funding of 10 to 20 percent of that budget.

The contributions have remained fairly stable: some donors have declined, especially in Europe and Canada, but other donors have increased like the United Kingdom, Australia and Brazil. Somehow one has balanced the other, and the general result has been stable donations but increasing needs. That is the problem, the needs increase but the donations don’t keep up…

Q: What kind of needs have increased in recent years?

A: The population of refugees increases three percent every year. A lot of the type of work that we do tends to have inflationary costs. We have 700 hundred schools and 500,000 children, so the cost of running this operation tends to increase.

Q: What is the situation of the refugees in Syria?

A: The situation in Syria is getting even worse because the conflict is now widespread – it affects civilians, (whether) Syrians, Iraqi refugees or Palestinian refugees. Now the conflict is too big and unfortunately some of them have been killed.

They are not targeted, but they find themselves in the middle of the conflict and there are (human rights) violations on all sides. Many Syrians have left the country and among them we estimate about 3,000 Palestinians have left to Lebanon and Jordan. I still hope that the conflict will be resolved and they can go back.

Q: How would you describe the general conditions faced by the Palestinians in the Middle East living under UNRWA protection?

A: It depends where they are, in Gaza it is very difficult because they live in an area which is blocked by Israel. In the West Bank there are difficulties with the expansion of the Israeli settlements. In Lebanon they have problems of human rights, they are deprived of some of the fundamental rights that all refugees should have.

The common problem is that they remain refugees and there is no political solution to that question. These are the refugees that fled in 1948, they are registered with UNRWA and their number has increased because they had children.

Q: This is your first official visit to Brazil. What are the main areas in which Brazil can cooperate with UNRWA?

A: Our main cooperation is with the federal government which gives us some financial contributions, which increased last year. I discussed with the minister of foreign affairs, Mr. Patriota, how this can be made more predictable, more stable over the years, and I got good feedback from him.

I also had meetings in São Paulo, Porto Alegre, Distrito Federal and Rio de Janeiro with local government and civil society, especially Arab communities. I think we have identified a number of interesting areas of cooperation such as health, social work with young people and education. So in these areas we will now try to develop projects of cooperation with different Brazilian institutions and sectors of society.

Q: You said that in Rio you saw similarities between the favelas and the refugee camps. Could the experience of the pacification of Rio’s favelas be adapted to the problems in the camps?

But the social policies and practices that Brazil has tried out in the favelas can be studied and lessons can be learned to improve the way we work, especially with young people in the refugee camps. Some aspects of the pacification process may be interesting, related to employment, education and working with youth.

I understand that there has been a lot of cross-fertilisation between the pacification programme and the work that Brazilian cooperation has done in Haiti, so it shows that this is a programme that has potential in international cooperation.

Q: Could Brazil hold a spot on the UNRWA Advisory Commission?

I proposed to the foreign minister the participation membership; he said that it is interesting for Brazil but they have to study this matter because it has some financial implications.

Q: Is Brazil in a position to take in Palestinian refugees, if necessary?

A: I hope that Brazil will continue to be a country that receives refugees in need, but I hope there will be no need to resettle Palestinians.

Q: Although the conflict in the Middle East is international in scope, Brazil is very distant geographically. What role would it be able to play?

A: This is not a small conflict; it is central to our history and to our world today. Brazil is a world power – maybe Brazilians don’t yet fully appreciate that, but its economy, its political importance, its capacity to influence processes in the world have become much greater and, therefore, I hope that Brazil will continue to be involved in trying to find a solution in the Middle East.

Brazil has traditional ties to the Middle East through its Arab communities. Helping refugees through UNRWA is one of the ways in which you can exercise a positive influence.