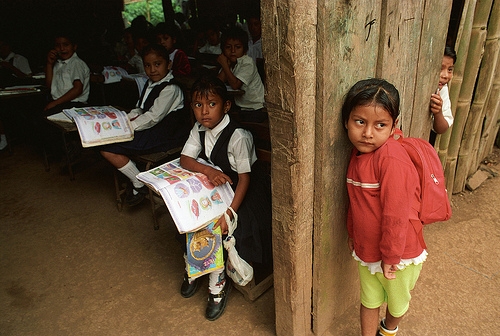 Girls at a rural school in Nicaragua. Credit: Oscar Navarrete/IPS

MANAGUA, Aug 22 2012 (IPS) - Carla lost everything when she got pregnant at the age of 13: her first year of secondary school, her family, her boyfriend, and her happiness. She spent a year panhandling on the streets of the Nicaraguan capital before she was taken in by a shelter for young mothers.

Her life fell apart in December 2006, when her mother discovered that she was three months pregnant as a result of being raped by one of her primary school teachers. Her mother gave her a savage beating with a belt and threw her out of the house, saying she couldn’t afford another mouth to feed.

Carla’s* baby died at birth due to respiratory problems. During the pregnancy, a neighbour let her sleep in her house, but did not give her meals. So she sold homemade sweets and begged for small change at bus stops, where she suffered continuous sexual harassment from men who offered her money, drugs or food in exchange for sex.

She was initially taken in by Casa Alianza, the Latin America branch of the New York-based Covenant House, an international child advocacy organisation. But at the age of 15 she went to stay at a school shelter, where she took cosmetology and beauty courses. Now 19, she works in that field, and is also a volunteer motivator in the centre for young mothers, which she said saved her life and taught her that she had human rights.

The case of Carla, with whom IPS was put in touch by a non-governmental organisation that works with at-risk children and adolescents, illustrates a phenomenon that takes on alarming proportions in this Central American nation, one of the few countries in the world where abortion is illegal under all circumstances.

In this country of 5.8 million people, one of the poorest in Latin America, there were 1.3 million births in the public health system in the last 10 years. Of that total, 367,095 births were to girls and adolescents, including 172,535 to girls under the age of 14, according to a Health Ministry statistical report covering the period 2000-2010, released in July.

Dr. Osmany Altamirano, an adviser on sexual and reproductive rights with the Nicaraguan office of the global children’s charity Plan International, told IPS that the problem was serious but improving.

“In the year 2000, adolescent mothers were 31 percent of the total. The teen pregnancy rate has gone down, although it is still the highest in Latin America, and one of the highest in the world,” he said.

A 2007 study by the Latin American and Caribbean Demographic Centre reported that Nicaragua was the country with the highest adolescent birth rate in Latin America.

Nicaraguans of child-bearing age (10 to 49) represent 65 percent of the total female population, and 37 percent of that portion are between the ages of 10 and 19.

Altamirano said the phenomenon of teenage pregnancy in Nicaragua forms part of the cycle of poverty in which most of the young mothers have lived.

“Pregnant girls reproduce the cycle of poverty, because they become mothers before they are biologically mature – in other words, they are underweight mothers who suffer from chronic malnutrition and give birth to low birth-weight, short-stature babies,” he said.

He also said that 47 percent of pregnant girls and teenagers do not complete primary school, effectively losing their right to an education.

“Many are forced to look for work in disadvantageous conditions, because they don’t have experience or training in a profession or trade, others are thrown out on the streets, and many end up as the victims of sexual exploitation,” he said.

According to World Health Organisation (WHO) statistics from 2009, 16 million girls between the ages of 15 and 19 years old give birth every year, accounting for 11 percent of all births worldwide.

Karla Nicaragua, with the Quincho Barrilete Association, told IPS that in a study carried out in 2011 among teenage girls in Managua, 60 percent admitted to being pressured or induced to have sex with relatives, classmates, neighbours or even their fathers.

The phenomenon is explained, among other things, by a social fabric “that sees pregnancy as something normal” and “by a legal system that forces women to give birth, even under conditions of medical risk,” said Nicaragua, whose association is dedicated to the protection of street children in Managua and to preventing violence against children.

Since 2006, this Central American nation has been one of the few countries in the world where abortion is illegal in any circumstances, and is punishable by prison – even if the pregnancy is the result of rape or incest, or the mother’s life is in danger.

“The lack of scientific, accurate sex education in school and in the family, sexual harassment and abuse, peer pressure among adolescents, poverty and overcrowding, along with a permissive justice system, are all factors that influence the high teen pregnancy rate,” she said.

Lorna Norori with the Movement Against Sexual Abuse (Mcas) said that sexual violence is hidden behind the statistics on teenage pregnancy.

Nicaragua’s penal code establishes that sexual relations with a child under 14, even with the consent of the minor, amounts to rape, and is punishable by 12 to 15 years in prison, the activist for the human rights of women said.

Norori accused the state of Nicaragua of complicity in the public policy of forcing young pregnant girls to give birth, despite the fact that the law clearly states that they are victims of rape.

Around 40 percent of victims of rape in Nicaragua have no access to justice, according to the study “Indignación: datos sobre violencia sexual en Nicaragua 2011” (Indignation: Statistics on Sexual Violence in Nicaragua 2011), carried out by Mcas.

For the study, the organisation compared the records of the government forensic institute (IML) and of the National Police office of women and children (the Comisaría de la Mujer y la Niñez).

The study points out that while the IML reported a total of 4,409 forensic medical examinations of rape victims in 2011, the Comisaría de la Mujer y la Niñez only recorded 3,047 cases handled by the office of the public prosecutor.

The IML records show that more than 85 percent of the forensic exams were carried out on underage girls. Of them, 36.5 percent were adolescents between the ages of 13 and 17 and 49 percent were girls under the age of 12.