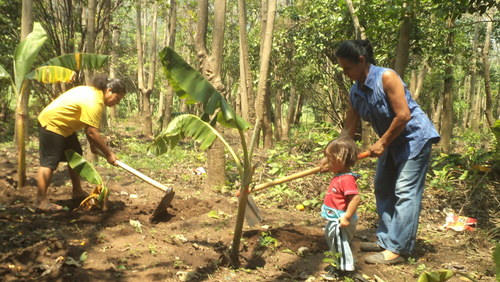 SAN SALVADOR, Aug 2 2012 (IPS) - Civil society organisations are asking the World Bank to reject the Salvadoran government’s proposal to join a programme for reducing greenhouse gas emissions linked to deforestation, on the argument that it will actually harm the environment.

If the government’s proposal is accepted it would delay “complaince of urgent national and international commitments on climate change,” say activists in a letter sent to Benoît Bosquet, coordinator of the World Bank’s Forest Carbon Partnership Facility (FCPF), in June.

The FCPF coordinates the global programme for Reducing Emissions from Deforestation and Forest Degradation (REDD+). El Salvador kicked off the adherence process when it sent the first document in April.

The Ministry of Environment and Natural Resources submitted a revised version of the proposal in June and the acceptance process is expected to be completed by the end of the year.

According to the UN-REDD programme’s web site, it is “an effort to create a financial value for the carbon stored in forests, offering incentives for developing countries to reduce emissions from forested lands and invest in low-carbon paths to sustainable development. ‘REDD+’ goes beyond deforestation and forest degradation, and includes the role of conservation, sustainable management of forests and enhancement of forest carbon stocks.

Activities to preserve pristine woodlands from deforestation or revive degraded forests earn emissions savings certificates which can be sold to industries in wealthy countries by trading on the so-called carbon offset or carbon market, which thus buy the right to emit or discharge a specific volume of CO2-equivalent.

But many local and international civil society organisations criticise REDD+. They argue that, beyond the praiseworthy aim of preserving forests in developing countries, the mechanism does nothing to enforce reduction of greenhouse gas emissions by the industrialised countries that are the prime causes of the pollution.

“This is perverse logic on the part of sectors emitting the most greenhouse gases, like industry, energy generation and transport, which produce 60 percent of all emissions and are seeking to avoid responsibility,” said Ivette Aguilar, an expert on climate change.

“Rich countries do not want to change their consumption patterns,” she told IPS.

Aguilar said that at the international climate change conferences in Cancún, Mexico in 2010 and in Durban, South Africa in 2011, the industrialised nations distanced themselves from their duty under the 1997 Kyoto Protocol, whose targets remain unfulfilled to this day, and instead offered to negotiate new reduction goals in 2015 that would only enter into force in 2020.

“They have to cut their emissions by 50 percent before 2020 in order to limit the rise in the planet’s temperature to two degrees, otherwise it may increase by four degrees, with disastrous effects,” Ángel Ibarra, the director of the Salvadoran Ecological Unit (UNES), told IPS.

Central America is one of the most vulnerable regions of the planet and is already severely affected by climate change, in spite of only contributing 0.3 percent of global greenhouse gas emmissions, said the head of UNES, one of the civil society organisations that signed the letter sent to the FCPF on May 15.

Created in 2008, the FCPF manages two funds: a “market readiness initiative” with 235 million dollars intended for tropical and subtropical developing countries, and the 215 million dollar BioCarbon Fund involving seven countries, according to the FCPF web site.

So far it has 18 donors, including Germany, Norway, the United States, the United Kingdom, and the European Union, as well as BP Technology Ventures, a corporation, and The Nature Conservancy, an environmental group.

Trade in carbon credits works like any other market, where international financial intermediaries make a killing on buying and selling certificates, experts told IPS in interviews.

The World Rainforest Movement (WRM), based in Uruguay, wrote to the FCPF in support of the Salvadoran civil society groups on Jun. 29.

In a letter addressed to Bosquet, it said it had determined that these mechanisms led to the appropriation of forested areas by corporate interests that deprived traditional users of access, land tenure and the right to natural resources.

Maritza Erazo, an expert in climate change, told IPS that when the programme comes into effect, provinces and communities in forest areas included in the initiative will have to sign legally binding contracts. And if any contract clauses are violated, communities “may even lose title to their lands.”

Indigenous communities are often evicted or expropriated from their lands because they live in forest areas rich in coveted natural resources, the expert said.

Meanwhile, El Salvador’s Environment Minister Hermán Rosa stated that the Salvadoran government was not interested in participating in the carbon market.

“We are not tying REDD to the carbon market; our approach is based on the obligation of developed countries to support actions for climate change mitigation and adaptation,” he told IPS.

But Aguilar said it was illogical to propose entering the programme and at the same time claim that there is no interest in taking part in the carbon market.

“The sole interest of developed countries is to compensate for their emissions, and they can only achieve this by buying carbon credits offered by the countries in the programme,” she said.

In spite of the civil society petition to halt the process of joining REDD+, the minister said that El Salvador would maintain its course.