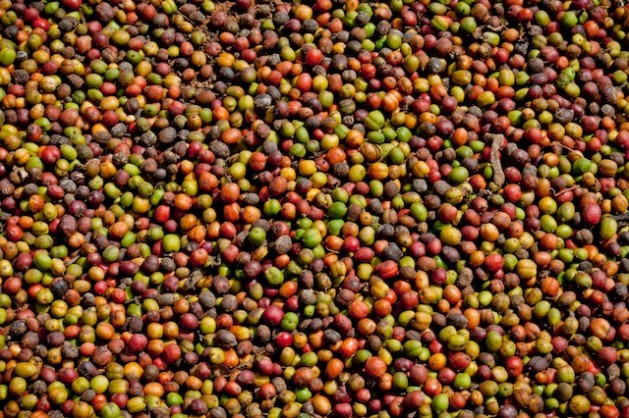 Coffee being dried on the roadside in Busoga, Eastern Uganda. Credit: Will Boase/IPS

KAMPALA , Sep 28 2012 (IPS) - Uganda, Africa’s biggest coffee exporter, is racing against time to boost its production of the crop by 60,000 tonnes, or one million 60-kilogramme bags, within the next three years. But some industry players believe that the feat is unattainable.

This East African nation’s target is to raise annual output from 3.5 million to 4.5 million 60-kilogramme bags, and it plans to do this through an ongoing government replanting programme.

Francis Chesang, the production manager at the state-run Uganda Coffee Development Authority (UCDA), told IPS that he was confident that this landlocked nation would soon reach its target.

“Our replanting programme is yielding results and we should be able to lift annual production in 2015… because more of the new fast-growing and high-yielding trees are coming into production.”

Uganda, the continent’s second-biggest grower of the crop after Ethiopia, launched its coffee replanting programme in 1994, a year after the country detected the coffee wilt disease that devastated half its stock of Robusta trees.

Currently, Uganda has a combined stock of 300 million Robusta and Arabica trees, according to the authority.

At least 140 million trees, mainly Robusta, were planted over the last 18 years, with the goal to plant a total of 200 million trees by 2015, Chesang said. The replanting aims to “optimise foreign exchange earnings into the country and payments to farmers,” he said.

The crop accounts for 20 to 30 percent of the nation’s annual export earnings, with Uganda earning 448.9 million dollars from the export of 3.15 million bags of coffee from Oct. 1, 2010 through September 2011, according to the UCDA.

The country was the world’s ninth-biggest exporter of the crop during that period, ahead of Ethiopia, which was in 10th place, according to the International Coffee Organization. 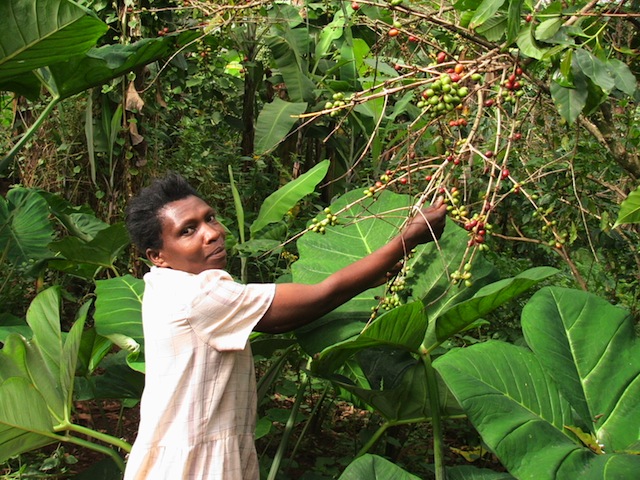 According to David Muwonge, the deputy executive director of the National Union of Coffee Agribusiness and Farm Enterprises, Uganda is unlikely to meet its increased coffee production target as yields remain lower than potential because the country is yet to replace all the coffee trees destroyed by the 1993 wilt disease.

“I think it will be really hard to achieve this target because we are yet to plant 60 million trees,” he said. “The target is achievable, but only when all the new trees are in production.”

Muwonge added that the insufficient number of trees, aging trees, poor farming methods and the effects of climate change meant that it was unrealistic to increase coffee production by one million 60-kilogramme bags over the next three years.

Fred Kyobe, a 64-year-old farmer in the Wakison District in Uganda’s Central Region, told IPS that production volumes have taken long to recover from the wilt disease devastation as the youth did not have the patience to venture into coffee farming. He said that the lure of fast-paying jobs in urban centres resulted in the youth abandoning coffee farming because it takes more than three years before the crop starts yielding.

“My sons have abandoned farming in favour of motorcycle taxi businesses in town, and my vigour is reducing due to old age,” he said. “The blow I received when the coffee wilt disease attacked my crop made me less enthusiastic about it.”

Coffee here is grown by at least half a million smallholder farmers, 90 percent of whom own fields ranging from 0.5 to 2.5 hectares, according to the UCDA. The sector employs 3.5 million people.

“Coffee continues to play a pivotal role in the Ugandan economy, contributing immensely to the export earnings to the tune of 449 million dollars in 2010/11 and providing a livelihood to about 1.32 million of the 3.95 million agricultural households,” the UCDA said on its website.

The crop remains a key export commodity for Uganda in spite of it dropping from contributing 60 percent of export earnings to the current 20 to 30 percent, Muwonge said.

“Coffee is still central to the Ugandan economy for employment, farmer incomes and hard currency earnings in spite of the drop in its export revenue share due to the diversification of exports,” he said. “Increased investment in the sector may bear fruit in the government’s poverty reduction programmes.”

Ugandan President Yoweri Museveni underlined the importance of the crop last week by stating that anyone caught contaminating the coffee quality should be arrested and prosecuted. In the past, some farmers have been accused of harvesting immature beans, while dealers were accused of mixing low-grade coffee with higher grade brands and selling it as superior quality.

“The urge to pick immature coffee is driven by poverty, since at times urgent needs may arise before your crop fully matures,” Sunday Mugaga, a coffee farmer in of Kayunga District in Uganda’s Central Region, told IPS.

Mugaga’s income from coffee is barely enough to support his family so he supplements it by selling the fish he catches from the Nile River, which flows through his district. The lure to expand his almost one-hectare coffee farm is strong, but he is constrained by a lack of available land.

“My two brothers and I inherited only four hectares of land from our father, which limits my expansion. But with time I will plant more coffee when I acquire more land,” he said.

“I treasure coffee because income from the crop has enabled me to send my five kids to school, although I must admit that the money isn’t enough to cover my needs,” he said.

But Uganda can still bank on the crop for most of its export revenue over the next three years, ahead of the planned commencement of its oil production in 2016, Robert Kasozi, an independent economics researcher, told IPS.

“With oil production not expected to reach commercial levels until 2016, coffee production still has a significant role in the country’s economy,” he said. “Uganda could thus benefit from increasing its output over the coming three years in the form of higher export revenue.”

The country also stands to benefit from rising global demand, which is projected to outstrip production in the next few years. This is especially driven by rising demand for coffee in Russia, India, and China, Kasozi said.

Meanwhile, many farmers remain committed to coffee because of the high prices they receive for their crops amidst the rising global demand, Isaac Ntumwa, a coffee farmer in the Central Region district of Masaka, told IPS.

“Many farmers in my district have embraced the crop with hopes for a better harvest in the next few years,” Ntumwa said.