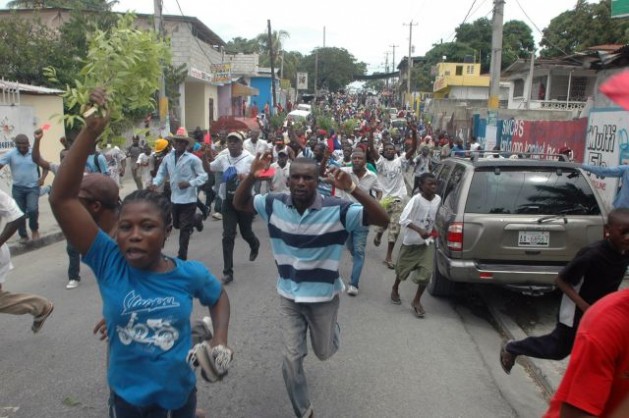 Some of the demonstrators running through the streets of Haiti's capital on Sep. 30, 2012. Credit: Lionel Fortuné/IPS

With posters and slogans denouncing the rising cost of living, the government’s authoritarianism and corruption, and also calling for Martelly to step down, demonstrators made their way to the ruins of the National Palace, crushed in the devastating earthquake of Jan. 12, 2010.

“One way or the other, he’s got to go!” was one of the many slogans shouted by demonstrators, whose ranks included hundreds of supporters of Aristide’s Lavalas Family party, as well as people from parties and groups who once marched in the streets against the popular former priest and president.

Aristide was ousted in 2004 with support of these same political groups, and also in a coup d’état in 1991 that resulted in a brutal three-year military regime. Both efforts had overt and covert support from Washington.

On Sunday, the former sworn enemies were marching together in a demonstration that brought to a close several weeks of protests around the country. Some of the marchers carried red cards – indicating a fatal “penalty” in football – while others carried posters.

The Martelly government has also faced increasing criticism for its failure to re-house earthquake victims as well as for rising prices due in part to the falling value of the Haitian gourde. Consumer prices rose almost one percent in August alone, bringing inflation over the past 12 months to over six percent, according to the government Haitian Institute of Statistics and Data Processing.

In an effort to calm the population, in September the government formed a “price stabilisation committee” and announced it would import 300,000 sacks of rice from Japan. Rice farmers and economists have denounced the measure as populist and harmful to local agriculture.

“The government decision to subsidise rice ‘dumping’ is a direct consequence of the protests of people who have seen their cost of living rise,” rice farmer and peasant leader Nesly Voltaire told IPS in an interview in the country’s “breadbasket”, the Artibonite Valley. “The money the government is investing in importing rice could have been used instead to finance small farmers.”

Speaking with the online news agency AlterPresse on Sunday, Schiller Louisdor of the Lavalas Family said the deterioration in people’s living conditions was the direct result of both “coups d’état” and added: “We want to tell the president that we won’t accept this situation of misery.”

Over the past two weeks, students, teachers, workers, mothers and fathers who can’t muster school fees for their children, and the unemployed have taken to the streets in a half-dozen cities across the nation to protest rising food prices, unpaid teachers’ salaries, poor conditions at the state university in Gonaïves and insecurity and crime that plague many cities.

Les Cayes and Cap-Haïtien have also both seen strikes. While some of the demonstrations only gathered a few hundred, others – notably in Cap-Haïtien in Haiti’s north – have brought out thousands.

“This movement is going to spread! Other cities are going to demonstrate!” declared Senator Moïse Jean Charles of the North department in radio interviews last week. Jean Charles is one of the regime’s most outspoken critics.

Other politicians have also been adding their voice to the chorus. On the radio last week, former presidential candidate and constitutional scholar Mirlande Manigat said the public “should pay attention to the demonstrations”.

“We need to watch all of this closely. Every city has its own problems,” added the head of the Rassemblement des Démocrates Nationaux Progessistes (RNDP – Assembly of Progressive National Democrats). “These developments show that now the people are no longer just talking; they are acting.”

The Organisation Peuple en Lutte (OPL – Organzation People in Struggle) party issued a “communiqué” on Sep. 22 deploring “the lamentable situation in the country and the depressing possibilities for the future as a result of the government’s antidemocratic attitude and the autocratic decisions of authorities which are leading the whole society down dangerous paths of illegitimacy and chronic political instability.”

The “illegitimacy” and “autocratic decisions” to which the opposition party referred are related to the executive’s ramming through constitutional amendments last June. Scores of analysts and scholars – including Manigat – have called them “unconstitutional”.

More recently, the executive has attempted to force the creation of an electoral council without properly following proper procedure. So far, the legislative branch has failed to choose their representatives. Elections originally slated for November have been indefinitely delayed, leaving every single city hall, and one-third of the Senate, without elected officials.

Last week, the minister of justice suddenly fired the Commissaire de Gouvernement (top government prosecutor) Jean Renel Sénatus for insubordination and for “disrespect”. The next 48 hours saw a virtual revolving door of two more nominations and then resignations for the same post, until it was finally filled on Saturday.

Quoted in the Haitian daily Le Nouvelliste on September 28, Sénatus agreed he had been insubordinate.

“In less than three months, the minister (of justice) asked me to execute 17 illegal orders. In these cases, yes, he can say that I didn’t execute orders and that I was disrespectful,” the former prosecutor said, adding that the minister had also asked him to arrest 36 people for a “plot against the security of the state and association with criminals”. Sénatus said he also refused to carry out those orders.

Due to the implementation of draconian neoliberal policies in Haiti over the past two decades – which include the lowest tariffs on food imports in the Caribbean – and recent governments’ inability or lack of will to adequately intervene in the agricultural sector, Haitian rice production has failed to keep pace with population growth and consumer demand. Foreign rice routinely sells at 40 to 50 percent less than Haitian rice.

During a recent visit to Haiti, U.N. Assistant Secretary-General for Human Rights Ivan Simonovic deplored the government’s lack of progress in achieving even minimal benchmarks.

“For too long many Haitians have been claiming their economic and social rights in vain, and have not even been reached by basic services. The new development efforts must be based on human rights and ensure that benefits are enjoyed by all, in particular the poorest,” Simonovic said, according to a UN News Centre release on Sep. 17.

Speaking at the U.N. General Assembly on Sep. 26, Martelly called for rich nations to keep their promises to help Haiti recover from the earthquake. Thirty-two months after the catastrophe which killed at least 200,000 people and caused billions of dollars worth of damage, only about only about one-half of the 12 billion dollars pledged for relief and recovery by bilateral and multilateral donors has been disbursed, the U.N. Special Envoy’s office reporter last month.

Some 360,000 people still live in squalid tent camps. More than two-thirds of Haitians live on less than two dollars a day, according to the World Bank.