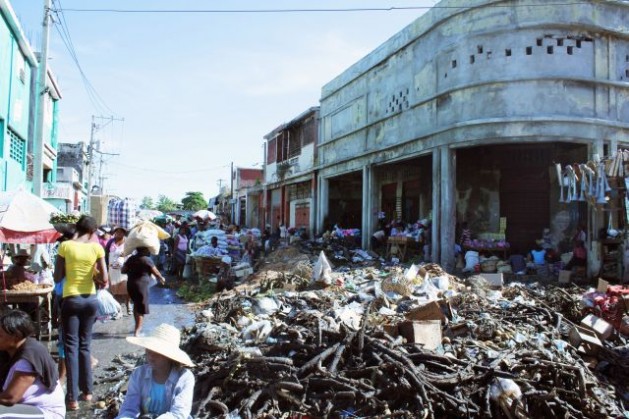 An intersection of Jean-Jacques Dessailines Boulevard (also known as "Grand Rue" or "Main Street") and a side street, clogged with garbage and street vendors. Credit: HGW/Evens Louis

PORT-AU-PRINCE, Oct 10 2012 - Even though a restrictive government decree that blocked reconstruction of downtown Port-au-Prince for almost two years was finally annulled, questions, frustrations and doubts abound about the eventual recovery of Haiti’s economic, cultural and political capital.

All signs indicate that rather than focusing on crucial infrastructure work, the government is more interested in rebuilding its ministries.

While the past 32 months have seen meetings, colloquiums, studies and declarations, a drive through downtown shows that, aside from rubble removal, little reconstruction has taken place.

Only one significant building has gone up. Everywhere else is a jumble of ruins, rubble, at least four corn fields, and mounds of garbage that poison the air. There are no signs of work on the sewage, drainage or electrical systems. And a lack of police presence means that thieves still plague the capital’s formerly crucial commercial area.

Many of the large businesses have left downtown for the suburbs, leaving “Main Street” to informal sector vendors who jam sidewalks and half the street. Other shopkeepers and businesspeople seem almost without hope.

“Port-au-Prince will never be like it was 25 years ago,” a shopkeeper in his fifties told Haiti Grassroots Watch (HGW) as he sat in his mostly empty appliance store on the Rue des Miracles (“Street of Miracles”). “Nothing is going to happen,” he said.

Like most of the other 15 merchants questioned by HGW, he agreed to speak only if his name was not mentioned.

But the government maintains progress is being made.

“Downtown was and will again be the economic heart of the country. It will be even better than it was. We have to finish the studies. We have been working very seriously, non-stop,” Michel Présumé of the government’s Unit for the Reconstruction of Housing and Public Administration Buildings (UCLBP in French) boasted in a Jun. 19, 2012 interview.

Haiti’s Jan. 12, 2010, earthquake was one of the greatest urban disasters of modern times. In addition to the estimated 200,000 killed, “(t)he quake produced urgent reconstruction costs estimated at $11.5 billion, destroyed over 80 per cent of Port-au-Prince and several towns and villages close by and flattened the seats of all three branches of government along with fifteen of the seventeen ministries, 45 per cent of the police stations and a number of courts,” the International Crisis Group wrote in a Mar. 31, 2010 report.

Then came the government decree of Sep. 2, 2010, suddenly designating about 200 hectares of downtown land “of public utility”, blocking all reconstruction.

“All construction, building of roads, division of lots, or any other exploitation of the land, including any and all real estate transactions, are and remain prohibited for all of the area defined in Article 1,” Article 2 of the decree reads.

Michelle Mourra, a founding member of SOS Centre-ville (SOS Downtown), an organisation of downtown business people and property owners, said the decree was “a terrible blow”.

“The private sector probably suffered worst material loses than any other sector on Jan. 12, 2010,” she wrote in an email to HGW on Jul. 16, 2012. “The public utility decree was an even worse setback, because we had to watch, powerless, for two years while downtown was looted and destroyed.” 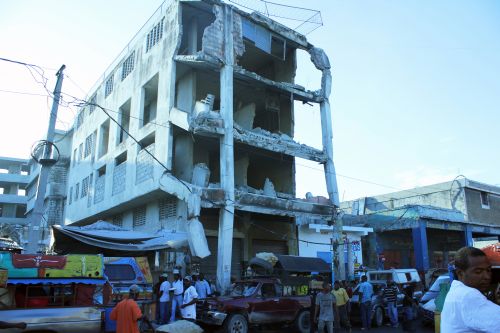 The skeleton of a building looms over the pedestrians, vehicles and vendors on Jean-Jacques Dessalines Boulevard. Photo: HGW/Evens Louis

Despite the change in government in May 2011, the decree wasn’t annulled until a year later, on May 29, 2012. But cancelling the decree was not the only hurdle. Not unexpectedly, a key challenge has been planning how to rebuild the devastated capital. Proposals have been put forward – one from England, one from Haiti – but so far no definitive approach.

The Ministry of Planning and Overseas Cooperation (MPCE in French), together with UN-HABITAT, held meetings in July 2010, and a forum “Vil nou vle a” (“The city we want”), in November 2011.

“It’s good that there’s a debate around certain ideas, but there’s a moment where one must say, ‘Okay, now let’s do a synthesis of all of these, let’s take the best from Prince Charles, the best from Trame, the best from the others, and let’s set up the framework and let’s move forward,” said Jean-Christophe Adrian, former head of UN-Habitat.

One thing that all of the plans, and all of the actors, seem to agree upon is the importance of infrastructure.

In its presentation at the Vil nou vle a forum, the Canadian firm Daniel Arbour and Associates (also known as IBI/DAA Group) noted that the “provision of potable water, energy, pedestrian and vehicle access, sanitation and sewer services, (and) access to telecommunications and internet linkages” would be key.

The Haitian government also appears to agree, at least in interviews.

“We must create conditions for the private sector where it feels at ease, protected and accompanied, so that it can then take risks,” Michel Présumé of the UCLBP said. “The government will play an important catalyst role. The first steps will certainly be taken by the Haitian government.”

But rather than initiating the massive infrastructure work necessary, the government recently opened work sites for three ministries at a price tag of 35 million dollars.

Private sector on its own?

““The authorities really do have the will to do things,” he said, but he added that “(a) country can’t develop without a dynamic private sector. The private sector must accompany (the government).”

“The reconstruction of downtown, and of the rest of Port-au-Prince, is a massive job. The government can’t do it alone. We are all concerned. The moment has come for everyone to collaborate,” Mourra wrote to HGW in her Jul. 16, 2012, correspondence.

But so far, the private sector is the one that finds itself “alone”. And interviews conducted by HGW discovered incertitude and frustrations.

“If (the government) did have will, they would have begun already. There are still places that haven’t even been cleared of rubble! All the money stays at the top, it doesn’t come down. In other words, the poor don’t have a government,” said a woman who has a wholesale soft drink business, as she got her hair done at a small beauty salon.

“Everyone likes beautiful things,” added another woman, who works at a small air conditioner supply shop. “Even in Puerto Rico, or the Dominican Republic, everything looks at least a little nice. You would really like your country to look like all the other ones. But here, it’s ‘look out for yourself only.’…I’ll only believe in (reconstruction) when I see it.”