HAVANA, Oct 2 2012 (IPS) - “We have to expand the sense of urgency and indignation towards gender violence,” Dr. Ana Güezmes, UN-Women regional director for Mexico, Central America, Cuba and the Dominican Republic, told IPS on a recent visit to the Cuban capital.

Güezmes says that to bring about change, young people and men must be drawn into the “historic cause” against domestic violence.

UN-Womensays violence against women and girls is a problem of “pandemic proportions.” Based on country data, it reports that up to 70 percent of women experience physical or sexual violence from men in their lifetime. 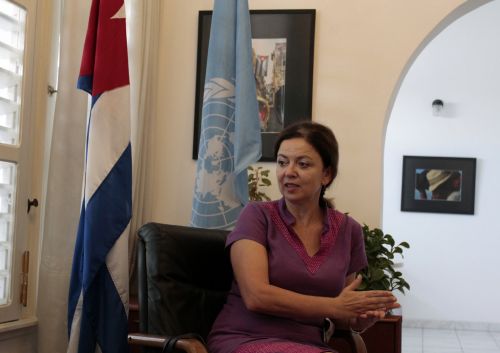 On her visit last week to Havana, Güezmes told IPS about the challenges, advances and setbacks in the fight against domestic violence and the regional response to the global call for action “Say NO – UNiTE to End Violence against Women”, launched in 2008 by U.N. Secretary General Ban Ki-moon.

Q: Tell us about the UNiTE campaign.

A: It’s a call to countries to join the cause, not just a media campaign. It’s based on three fundamental pillars: ending impunity, prevention, especially in education and culture, and fomenting shared responsibility of all social actors.

We want to foment the sense of urgency and indignation towards abuse, together with other alliances.

And the actions are mushrooming. For example, on Nov. 25 the U.N. commemorates
the International Day for the Elimination of Violence against Women, which marks the start of 16 days of activism to raise awareness about the serious problem of gender violence, until Dec. 10, Human Rights Day.

Now the UNiTE Global Youth Network is carrying out the Orange Day campaign, to dedicate every 25th of the month to the issue.

Q: What are the priorities identified by Mexico, Central America, Cuba and the Dominican Republic, within UNiTE?

A: Central America and the Dominican Republic have established three urgent lines of action: against femicide (gender-based murders of women), the situation of migrants, and visibilising the question of sexual violence. They also put a priority on approaching the issue of violence as an expression of inequality, closely related to the social insecurity of their populations.

Murders of women have taken on an outrageous magnitude in these countries, although I believe that one single case should be enough to make us feel outraged and prompt us to do something. For example, femicide in the Dominican Republic mainly occurs within the family.

The reality of migrants is worrisome because of the strong impact of sexual exploitation and trafficking on women migrants. More than 80 percent of the victims of these crimes in the region are women.

In Cuba, the aim is to bring about a collective response to gender violence on the part of all social sectors. And to improve women’s access in the economy, within the current process of updating Cuba’s economic model.

Q: How can the younger generations and men in particular be incorporated in this global call to action?

A: Young people are the solution. They have many cultural and educational advantages, and they can help build a society with an egalitarian culture within the broad ethnic, cultural and linguistic diversity of Latin America. Using art, music and culture, they are helping to say “no” to violence against women.

Achieving their participation is essential for the campaign. Young people and women are last in line when it comes to access to management and decision-making positions, property, employment or productive resources.

The campaign launches a special call for men to join in the fight, with a strong voice. For example, an Ecuadorean initiative says “Machismo kills” and another, in Mexico, says “A brave man isn’t violent”.

Q: What regional initiatives are being implemented to gather statistics on gender violence?

A: In the last 20 years, Latin America has made progress in measuring gender violence and gender stereotypes. Several countries have created modules, others have carried out surveys, and some have even included questions on the issue in more general surveys. In addition, U.N.-Women works with the statistical institutes of countries in the region to provide guidance on studies of this kind.

Violence against women tends to happen within the home and at the hands of people who are close. For that reason, a large number of cases never reach the public services. According to a study carried out by U.N.-Women in five European countries, fewer than 10 percent of women report crimes of sexual violence.

For that reason, studies are needed among the population to document the problem and standardise the records – in other words, for the data collected by the police, community associations and prosecutors’ offices, among others, to speak to each other.

The patterns of discrimination that persist in societies despite gender equality laws and policies must also be monitored.

Q: All countries in this area have ratified the Convention on the Elimination of All Forms of Discrimination Against Women. Has progress been made on this front? What factors could lead to setbacks?

A: There have been advances. Many countries have great potential in terms of cultural management, to bring about further change. But it is still a problem of great concern.

Violence is the tip of the iceberg of the inequality and discrimination that women suffer. The achievements made by a society in terms of gender equality can be threatened or rolled back by economic crises, natural disasters or wars. One example of this is the rise in femicides in several countries of Central America and in Mexico.

The changes have to be political and at the same time, culturally sustainable. We live in a very difficult cultural context in economic, energy and climate terms. Women, especially young women and girls, have to participate in the debate on the challenges, and have to form part of the solutions.