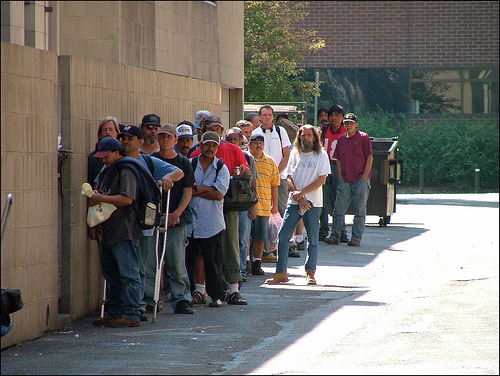 People lining up for food has become a common sight in many major U.S. cities. Credit: Jeffrey Beall/cc by 2.0

UNITED NATIONS, Oct 16 2012 (IPS) - Against the backdrop of a spreading global economic crisis, exacerbated by changing climate patterns, the global aim of guaranteeing food security for all by 2015 appears to be far from being achieved.

As delegates and activists are addressing the lingering issues of world hunger, malnutrition and poverty on the occasion of World Food Day Tuesday, homelessness and hunger are spreading fast and affecting millions of people across the globe, with far reaching implications in the United States.

In the world’s wealthiest nation, rising unemployment compounded by unprecedented high food prices are contributing to worsening living conditions. Persistent poverty and growing inequalities rather than scarcity of food is the main cause of hunger in the U.S., many analysts say.

According to the United States Census Bureau, since the global economic recession, the number of U.S. citizens who suffer from food insecurity nearly reached a staggering 50 million as of 2010, which represents the highest level ever recorded since the office began monitoring poverty rates more than 50 years ago.

Moreover, according to the latest figures, 20.5 million U.S. citizens live in extreme poverty. This means their family’s cash income is less than half of the federal poverty line, which corresponds to about 10,000 dollars a year for a family of four.

According to United States Department of Agriculture (USDA) ‘Household Food Security in the United States in 2010’ report, the prevalence of food insecurity varied considerably among households with different demographic and economic characteristics.

“Food insecurity is more common in large cities and rural areas than in suburban areas and other outlying areas around large cities,” the report states.

An especially vulnerable group is children, with as many as 17 million children nationwide who are currently struggling with food insecurity. According to several studies, one in four children in the country lacks consistent access to nutritious food to ensure a healthy life. In 2010, the poverty rate increased for children under age 18 from 20.7 to 22 percent.

“Financial crisis has a great impact and most have spent a couple of thousand dollars per month on food since the crisis began. But there is no reason that anyone can starve. This is so-called social injustice that we refuse to confront,” he added.

For over 20 years, the Presbyterian Church has provided homeless people with food, clothing and other services. People who have a home are assisted with food once a month.

The church gets 60 to 100 people seeking help on a daily basis.

Indeed, one of the most direct ways to cope with growing hunger in the U.S. is through national nutrition programmes.

More than 46 million U.S. citizens currently rely on the federally-funded food and nutrition assistance programmes to help meet their nutritional needs, with senior citizens, families with children and minority groups among others.

According to USDA statistics, a record 44 million people, or one out of seven U.S. citizens, are currently participating in the Supplemental Nutrition Assistance Program (SNAP).

Enrollment rates have particularly risen during economic distress, with current high unemployment which stands at 7,8 percent, as of September 2012.

Formerly known as the Food Stamp Program and administered by the U.S. Department of Agriculture, SNAP is government’s largest nutritional programme and is broadly available to almost all households with low incomes, with a particular focus on families with children, elderly people and people with disabilities.

Low-income pregnant, postpartum and breastfeeding women, along with infants and children up to age five who are at nutrition risk can benefit from Special Supplemental Nutrition Program for Women, Infants and Children, known by its acronym WIC, which provides nutritious foods, nutrition education as well as other health and social services.

Moreover, many U.S. citizens are relying on several government-affiliated food banks and other food pantries and soup kitchens and faith-based communities spread all over the country.

“There is a limited amount of help here. There are people that sleep on the street here at night,” a Presbyterian Church social worker told IPS.

“We receive people who are not working, who are not enough educated to find a work here, we have a class of people who are drugs or alcohol addicted. There are social services in New York City as well as human resources administration, but you’re limited in what you can do until people want to claw out of this cesspool and help themselves. If you have drug or alcohol problems you can’t think straight and your existence is from one day to another,” he added.

“You know where I’m sleeping? I’m sleeping in the front of the church,” a food programme recipient at Jan Hus Presbyterian Church told IPS.

Asked if the city should do more to help its citizens, he said, “There is enough food, but they should give us more shelter, more houses, places to stay at, not in the streets of Manhattan.”

Food-stamp spending is the USDA’s biggest annual expense, which has more than doubled in the last four years, reaching 75.7 billion dollars in 2011.

Ahead of the Nov. 6 elections, Republicans have criticised the high cost of the programme, proposing a new budget plan sponsored by Representative Paul Ryan, the Republican party’s vice-presidential nominee, that intents to cut food stamp funding by 33 billion dollars over 10 years.

Campaigning in Ohio last week, Ryan reportedly stopped at an empty soup kitchen where volunteers had finished serving food and washed clean pots and pans, prompting the president of the charity to tell the Washington Post, “He did nothing. He just came in here to get his picture taken at the dining hall.”