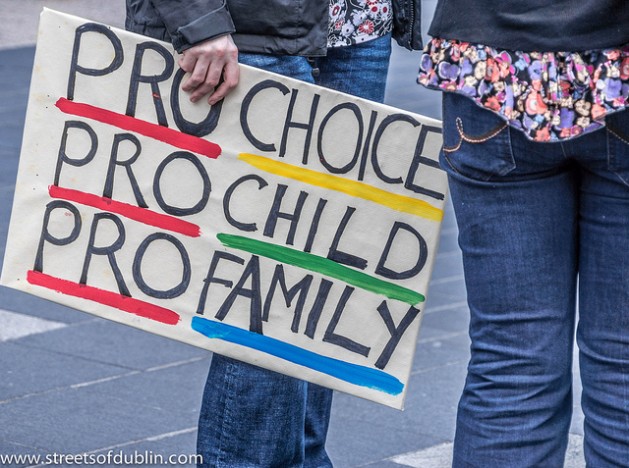 Lack of family planning has led to a surge in unsafe abortions in Eastern Europe. Credit: William Murphy/CC-BY-SA-2.0

PRAGUE/WARSAW, Nov 14 2012 (IPS) - Pressure from the Catholic Church, social stigma, a lack of information about sexuality and reproductive health and limited access to reproductive healthcare services are putting the lives of hundreds of thousands of women across Eastern Europe at risk.

According to the World Health Organisation (WHO), “Women are over four times as likely to die in childbirth in the newly independent states of the former USSR as in the European Union.

“In some countries unsafe abortions cause over 20 percent of all registered maternal deaths, and Eastern Europe has the highest abortion rate in the world.”

In the ‘State of World Population 2012’ report, released Wednesday, the United Nations Population Fund (UNFPA) urges all developed and developing countries to “increase financial support and political commitment” to reproductive health and “promote family planning as a right” to ensure women’s health and safety.

But far from heeding the calls of the international community, Eastern Europe appears to be sliding further away from these goals.

The Soviet Union was the first country in the world to legalise abortions in 1920, but it was made illegal between 1936 and 1955 when, women’s rights groups say, the number of deaths from illegal abortions soared.

The sexual revolution that took place in much of the Western world in the 1960s was seen by communist regimes as a symbol of Western decadence that should not be allowed to infiltrate the Eastern bloc.

The topic of sex, and subsequently sexual health, was not addressed at the national level.

Condoms were largely unavailable at the time and pharmaceutical contraceptives were either not trusted or were cost-prohibitive. Abortion remained the most common birth-control method in many states.

Attitudes have been slow to change. In Russia, for example, even today, use of the birth-control pill as a contraceptive remains relatively low at 20 percent, experts say.

There is no sex education taught in schools and many women, especially outside the country’s largest cities, are reluctant to discuss sexual matters, including contraception.

The fall of Communism just over 20 years ago changed former Eastern bloc societies radically, with legislation, including on abortion, undergoing complete transformations.

In Romania, where abortion had been made illegal under the regime of ex-President Nicolae Ceausescu, terminations were allowed again in 1990.

World Health Organisation (WHO) data shows that when termination was banned by the Ceausescu regime, maternal mortality was more than 20 times higher than it is today.

“UNFPA has programmes in many countries but with… very limited funding as most donors decided to pull out of the region, which is perceived as middle-income – as if there was a direct link between aggregate income and gender equality, health, or reproductive health,” he added.

While governments drag their feet on implementing national reproductive health policies, women are left at the mercy of a conservative society that offers very little space or support for family planning.

The last few years have seen a push, in many cases driven by the Church, to reinforce or tighten abortion legislation and deter access to or discussion of contraception.

This and other factors such as poverty, say women’s rights groups, have already led to a thriving underground abortion industry riddled with health risks and, in some countries, a growing practice of do-it-yourself terminations that are dangerous at best, but often fatal.

Poland: a laboratory of unsafe practices

Poland has some of Europe’s tightest restrictions on abortions, only allowing termination of pregnancy in the case of rape, incest or if the mother or baby’s health is at serious risk.

Yet even when those conditions are met, doctors in this staunchly Catholic society often refuse to carry out abortions for their own moral reasons, says Dr. Dorota Pudzinowska, a lawyer at the Helsinki Foundation for Human Rights in Poland.

“In principle, the law states that abortions should be allowed in certain circumstances,” she told IPS. “But the law also protects doctors’ rights to refuse certain procedures,” which means women are often forced to seek illegal abortions or go abroad to terminate their pregnancies.

“Approximately every third private gynaecologist provides abortion services illegally, which cost between 400 and 700 euros, but women have no control over the conditions in which these termination are provided” nor can they determine the skill level of the so-called doctors who carry out these operations, according to Aleksandra Szymczyk, an activist belonging to a prominent women’s rights group in Poland that organises an annual demonstration on Mar. 8 to demand reproductive justice.

Under the constant threat of being caught and potentially jailed for assisting women to terminate their pregnancies, doctors generally carry out these procedures hastily, in unsterile conditions, away from the gaze of the medical establishment or law enforcement officials.

Several women in Poland unable to receive any kind of operation at all have taken their cases to the European Court of Human Rights.

One was the case of a 14-year-old rape victim from the southeast Polish town of Lublin, known only as ‘P’, who was turned away from a number of clinics where she sought a termination. Church leaders would wait at the clinics to try to persuade her not to terminate the pregnancy.

The Court condemned the Polish state for the inhumane and degrading treatment of the girl, and ordered it to pay compensation.

That case, say campaigners, was just an extreme example of a climate around reproductive health in Poland that puts moral strictures laid down by the church ahead of women’s well-being.

“A major issue is that nobody knows how many abortions are conducted every year and in what conditions. Official data indicates just over 600 legal terminations annually, but it is common knowledge that many more abortions happen every year – women’s groups estimate that the number could be anything between 100,000 to 200,000 annually,” Elżbieta Korolczuk, another activist from the ‘March 8’ group, told IPS.

“Most abortions are carried out at home without any medical assistance, and judging from the content of Internet forums, many of the women do not use abortion pills but drugs that cause abortion as a side-effect,” she said.

“As a result, they expose themselves to a number of other side-effects and health problems, which they often don’t report afterwards out of fear and shame.”

Family planning is an issue that desperately needs to be discussed in Poland, said Karolina Wieckiewicz, a lawyer at the Polish Federation for Women and Family Planning.

“There is no counselling, no family planning advice available as part of primary health services,” she told IPS. “Even if a woman knows about the possibilities of avoiding pregnancy, she often does not have access to contraception.”

Contraceptives are available on prescription, but not every doctor will prescribe them. “And often pharmacists will refuse to hand over contraceptives because they say it is against their conscience,” Wieckiewicz said.

The problem is not limited to Poland, but is widespread throughout the region.

Reports in the former Soviet state of Armenia last month stated that there was evidence suggesting that the last few years have seen an upsurge in dangerous home abortions using freely available pharmaceuticals for the treatment of ulcers.

The pills have a contraindication of causing bleeding and miscarriages, and women have been using them to terminate unwanted pregnancies.

But doctors have reported that this method often results in severe bleeding and incomplete abortions, with many women being admitted to hospital needing emergency surgery.

Surgical abortions at a hospital cost up to 50 euros while these over-the-counter pills cost closer to 50 cents. The average monthly wage in Armenia is around 400 euros, effectively making professional surgical abortions cost-prohibitive.

No official record of mortality rates or serious health problems resulting from these illegal abortions can ever be obtained because of their clandestine nature.

However, the WHO has stated that even today up to 30 percent of maternal deaths are still caused by unsafe abortions in some countries of Eastern Europe and Central Asia.

*Pavol Stracancsky contributed to this report from Prague and Claudia Ciobanu and Chloe Arnold from Warsaw.