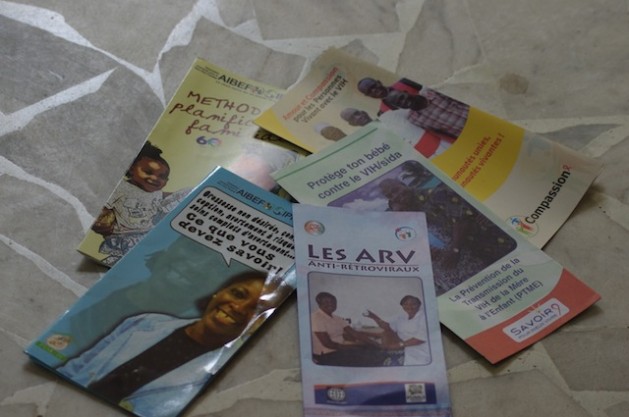 Clinique de Confiance was the first clinic in Côte d’Ivoire to begin targeting men who have sex with men. Credit: Robbie Corey-Boulet/IPS

ABIDJAN , Dec 1 2012 (IPS) - When Emmanuel Kokou, a 28-year-old sex worker, moved from his native Togo to Abidjan, Côte d’Ivoire in 2010, he knew there was a good chance that he had previously been exposed to HIV. But he had no intention of getting tested.

“I had done a lot of silly things,” said Kokou, whose name has been changed to protect his identity. “But I never got a test because I was afraid.”

That changed only after he visited Clinique de Confiance, a compact one-story facility tucked behind an unassuming blue gate in an upscale section of this West African nation’s economic capital. The test came back positive, and since then Kokou has learned how to manage his health and avoid transmitting HIV to others – namely, by insisting his clients wear condoms.

“If the clinic wasn’t here I wouldn’t have had the courage to do this,” he told IPS, referring to the process of learning his status and how to live with it. “There are people here who give us advice and reassure us.”

Clinique de Confiance was the first clinic in Côte d’Ivoire to begin targeting men who have sex with men (MSM), starting in 2004 with sex workers and their partners before expanding to all MSM in 2007. Although two other clinics offering similar services have opened recently, Clinique de Confiance remains by far the most established.

As such, the clinic has played a critical role in Côte d’Ivoire’s bid to lower the adult HIV prevalence rate, one of the highest in West Africa. Staff members estimate that roughly 1,000 MSM have visited the clinic over the years – only a portion of the total population (for which there are no good estimates), but still a significant achievement.

Activists warn, however, that unless something is done about the heavy stigmatisation that MSM face in Ivorian society – especially those who are HIV positive – it will be difficult to build on progress the clinic has made so far.

Unlike regional neighbours such as Liberia and Nigeria, where the issue of homosexuality has been highly politicised and lesbian gay bisexual and transgender (LGBT) populations have recently been targeted by harsh anti-gay legislation, Côte d’Ivoire does not have a reputation for persecuting MSM. A report broadcast by a Dutch radio outlet last year went so far as to declare that Abidjan was “becoming a gay Eldorado.”

Yet Dr. Camille Anoma, coordinator of the NGO that runs Clinique de Confiance, said discrimination against MSM – at home, at school, at work, in health centres and out on the streets – is common. He noted that no other health facilities were even trying to serve the MSM population before Clinique de Confiance started in 2004.

“Before that, the focus of our activity was female sex workers,” Anoma told IPS. “But the staff at the clinic kept seeing commercial sex workers who were men having sex with men. Our question was, ‘What is the situation of MSM in this country?’ And nobody seemed to know. That’s the reason why we decided to offer services for this group.”

Though the available data is limited, it is clear that HIV prevalence rates are considerably higher for MSM than the general population. UNAIDS, the Joint United Nations Programme on HIV/AIDS, estimates that the national adult prevalence rate was three percent in 2011. Internal numbers from Clinique de Confiance show that figure was 24.5 percent for MSM in 2009.

Claver N. Toure, executive director of the LGBT group Alternative Côte d’Ivoire, said the situation would be far worse without Clinique de Confiance and the two other clinics that welcome MSM. “It would be a catastrophe,” he told IPS. “The MSM are obligated to get their treatment and their prevention from these clinics because they’re not going to the general hospitals,” where they may be treated with derision.

There are a number of factors preventing Clinique de Confiance from expanding its reach, including logistical challenges such as transport costs. But Morley Bienvenu Nangone, head of monitoring and evaluation for Arc-En-Ciel Plus, a group that combats HIV/AIDS and homophobia, said the most formidable challenges were cultural.

He said the stigma associated with homosexuality prevents many men from acknowledging even to themselves that they are gay, making it far less likely that they will seek out HIV prevention and treatment resources. “What needs to be done for health is not just to focus on health, because health problems are linked to socio-cultural problems,” Nangone told IPS.

Nangone said that is why it was essential that Clinique de Confiance maintain a low profile. “If it wasn’t confidential, if there were large signs outside, then it wouldn’t work as well,” he said.

The experience of Kokou, the Togolese sex worker, underscores just how pervasive the stigma can be. He said that even though he had come to terms with his sexuality and his HIV-status, he kept both a secret for fear of how others would react.

“I don’t share my status because people will see me differently,” he said. “You’re seen badly, and people don’t trust you. I haven’t told anybody, not even a friend, not my dad or my mom. Nobody knows outside of the clinic.”

He went on: “As for being open as a gay person, I don’t even know how that would work. I just don’t go out. I just don’t have very many friends.”