The Chilean government has decided to adopt a model developed by South Africa to explore pathways to a low-carbon economy. 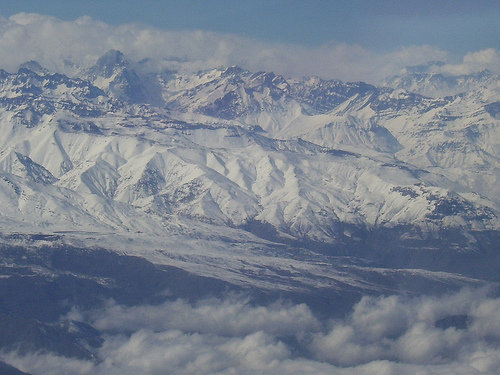 The glaciers of the Andes Mountains are threatened by global warming. Credit: Julieta Sokolowicz/IPS

SANTIAGO, Dec 11 2012 (IPS) - Chile is turning to South-South cooperation to help define the most effective strategies and options for reducing its greenhouse gas (GHG) emissions in the face of global climate change.

The Mitigation Action Plans and Scenarios (MAPS) initiative, being promoted in Chile by the government of Sebastián Piñera, is a collaboration among developing countries to explore each individual nation’s options for mitigating climate change while fostering economic development and poverty alleviation.

The aim is to develop “a solid base of evidence and information on what the country can do to reduce GHG emissions in different sectors of the economy,” Hernán Blanco, who is leading the MAPS process in Chile, told Tierramérica*.

MAPS grew out of the experience of the government-mandated Long Term Mitigation Scenarios (LTMS) process that took place in South Africa between 2005 and 2008.

The LTMS informed South Africa’s position for negotiations at the 15th meeting of the Conference of the Parties to the United Nations Framework Convention on Climate Change (COP 15), held in 2009 in Copenhagen.

“It was very successful, because it allowed them as a country to develop their position in a way that was solidly based on scientific research and on a process involving the participation of all of the relevant stakeholders from the South African economy,” said Andrés Pirazzoli, the executive coordinator of MAPS Chile.

This success gave rise to MAPS International, directed by the University of Cape Town’s Energy Research Centre in partnership with the NGO SouthSouthNorth, and with financial support from the Children’s Investment Fund Foundation, based in the United Kingdom.

In the search for developing countries interested in solutions for mitigating their GHG emissions, the initiative came to Latin America, and MAPS country projects are now underway in Brazil, Colombia and Peru, as well as Chile.

Although Chile is a minor contributor to global GHG emissions (0.2%), the country’s emissions have grown at an alarming rate, increasing by 232 percent between 1990 and 2006, according to the Ministry of Environment.

In response, the South American country made a voluntary commitment at the COP in Copenhagen to reduce its emissions by 20 percent by 2020.

The “exponential growth” in GHG emissions is a result of the expansion of the energy sector. “There has been very high development of thermoelectric power generation, while the share of hydroelectric power in our energy mix has decreased for various reasons,” explained Pirazzoli.

For environmental activist Juan Pablo Orrego, president of the Chilean NGO Ecosistemas (Ecosystems), this trend “is very troubling and is due to an extreme lack of caution, but also, and above all, to the sharp rise in the carbon intensity of the energy mix.”

“Obviously, Chile’s emissions are insignificant compared to those produced by countries like the United States and China,” said Orrego. Nevertheless, “we all know that the central region of the country is suffering from desertification, that there are 104 municipalities facing emergency situations in terms of water supply, and that the glaciers in the south are melting,” he said.

Orrego, who holds a Master’s degree in environmental studies and was the winner of a 1998 Right Livelihood Award (considered the “Alternative Nobel Prize”), believes that MAPS does not reflect “a sense of urgency proportional to the problem we are facing in terms of climate change.”

“I don’t see alarm, I see a very superficial level of concern,” he stated.

Pirazzoli, for his part, stressed that MAPS Chile involves the participation of seven different ministries (environment, foreign relations, energy, mining, finance, transportation and agriculture), “something unprecedented in the country, which demonstrates the political importance that the government has given to it.”

For the moment, MAPS Chile is focusing on laying the groundwork for the project, assessing potential emissions trajectories under two possible scenarios.

The first is the “business as usual” scenario, in which no changes are made to the current situation. The other is the “required by science” scenario, which would entail following the most stringent recommendations of climate experts to limit and reduce GHG emissions.

Orrego criticised the fact that a business as usual scenario is being assessed as a potential option, because he believes that the situation is much more complex than it seems.

“These types of projects are totally out of synch with the views of the scientific community. What is being done is still very superficial, and is presented as if there were different options, when there are none,” he maintained.

During the first phase of MAPS Chile, these two trajectories are being studied to establish an emissions baseline.

“In addition, and in order to gather essential background, we have commissioned two preliminary studies, one of which evaluates the state of development of climate models to determine what will happen with the climate in the particular case of Chile, and this work has been completed,” said Blanco.

The second study theoretically estimates future volumes of Chilean GHG emissions based on data from the Intergovernmental Panel on Climate Change.

The second phase of the project will involve the development of alternative pathways to the mitigation of emissions.

Finally, the third phase, scheduled for late 2013, will focus on the dissemination of the findings and the analysis of mitigation initiatives, both public and private, with decision makers in the government, private sector and civil society.

“MAPS Chile is not a binding project, it does not constitute an obligation and will not be converted into a public policy or new legislation,” explained Pirazzoli.

It is essentially “an exploratory exercise” aimed at “generating relevant information so that decision makers can adopt the measures they deem appropriate in the future,” he added.

The project also provides space for participation, in which different stakeholders can form part of a group for the development of scenarios and a working group.

“The level of complexity, of the information and knowledge required, has led us to design a process in which specialists and representatives from different productive and institutional sectors actively participate,” said Blanco.

But participation should begin at the grassroots, with prior consultations, because it is the Chilean people who live with the devastating impacts of climate change, stressed Orrego.