Developing World to Overshadow the West by 2030, Study Says

WASHINGTON, Dec 10 2012 (IPS) - A major new long-range report by the U.S. intelligence community suggests that the U.S. economy, currently the world’s largest, could be eclipsed by China’s by 2030. 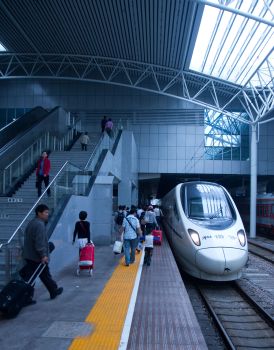 While the study, the result of four years of analysis by the U.S. National Intelligence Council (NIC), forecasts that the United States will remain a central player, NIC analysts foresee a newly multipolar world marked by a diffusion of power.

“Asia will have surpassed North America and Europe combined in terms of global power,” the “Global Trends” report states. “China alone will probably have the largest economy, surpassing that of the United States a few years before 2030. In a tectonic shift, the health of the global economy increasingly will be linked to how well the developing world does – more so than the traditional West.”

This evolution will be powered by a tremendously strengthened middle class across the globe, the NIC suggests, marked by greater education levels and access to health care. According to some models, extreme poverty could decline by as much as 50 percent within the next two decades.

Even the most conservative models used by the NIC project a doubling or even tripling in the size of the global middle class, led particularly by Asia and Africa. Much of the future global leadership, the report suggests, is likely to come from the upper echelons of this new demographic.

“We’re entering a period of uncharted territory – we’ve never seen a world … when the middle class will be the majority in most countries,” Mathew J. Burrows, the study’s lead author, stated Monday here in Washington. “This isn’t just Asia; it’s the entire developing world coming to the fore during this period, to the point where the traditional West is in many ways in the minority. That’s a huge change.”

Such changes will result particularly in a dramatic acceleration of “individual empowerment”. This is “the biggest megatrend”, Burrows says, “and a concept we didn’t even include in previous reports, which usually began with the role of the state.”

Interestingly, a European report, which also looked forward to 2030 and was released earlier this year, likewise focused on the rise of the global middle class and the relative empowerment of the individual.

Given that most countries do not have the resources to fund such long-term analyses, the Global Trends report, released every four years, is widely read around the world. Prior to its public release on Monday, the new study was unveiled for government officials and academics in 20 countries.

The new report itself is indicative of the official U.S. realisation of a fast-changing era, with NIC analysts using the study to offer analysis of previous Global Trends publications.

“When we began Global Trends over 15 years ago, we talked about continuity, about the United States being a unipolar power forever,” Burrows says. “But over the past decade, (several events) have created their own realities … In fact, when evaluating previous editions, we realised we had a misnomer – ‘Global Trends’ implies continuity, when in fact we’ve come to see this as period of rapid change.”

Of course, any or all of these changes could be stymied by a raft of issues. The new report specifically warns about the ramifications of a prolonged downturn in the global economy, a widespread outbreak of disease, or the impacts of climate change on resource scarcity – the latter a particular concern given the projections of a significant increase in the size of the global middle class.

But even if many of the social and economic forecasts contained in the new report do come to pass – and the NIC is extremely careful about refusing to offer any certainty on the “scenarios” it explores – it is doubtful that the transition towards a new multipolar system would be as stable as the old hegemonic system.

The flip side of individual empowerment, after all, is that “Individuals and small groups will have the capability to perpetrate large-scale violence and disruption, a capability formerly the monopoly of states,” the report states. This certainly follows from what many are already seeing on the ground, in which the nature of conflicts has changed significantly, even if the tools with which the international community engages with them have not.

The International Committee of the Red Cross (ICRC), the world’s oldest humanitarian agency, reports that roughly 95 percent of the violence it is currently involved in is constituted of fragmentary internal conflicts, not only revolving around a broad mix of resource issues but involving a spectrum of actors.

Given these new dynamics, Pierre Krahenbuhl, director of operations for the ICRC, is warning that many of today’s conflicts will still be festering a decade or two from now unless they are handled in political terms – in addition to the military and development priorities, which he says are well developed.

“I’m struck that we seem to live in a time where the military and the reconstruction elements are there, the development and the humanitarian elements are there, but that the political paradigm is far less supported,” Krahenbuhl told IPS during a recent roundtable discussion here in Washington.

“We’ve lived through the past decade in an environment in which the military reflex, of intervening, is the first resort in most people’s minds, certainly in the Western world. What we feel is required today is a re-engagement by states in terms of the political management of armed conflicts.”

On Monday, U.S. Senator Chuck Hagel said one of the strongest implications of the new NIC report is the importance of engagement.

“Engagement won’t fix all problems, but engagement isn’t appeasement or surrender or even negotiation – it’s a bridge-building process, an opportunity to better understand,” Hagel, who is currently being vetted to take over the U.S. Defence Department, said during a keynote address unveiling the new study.

“These big, complicated issues are beyond the control of any single nation or leader … It’s only through engagement that we’ll find the ability to move these great issues up to higher ground, to some solution and, ultimately, resolution.”