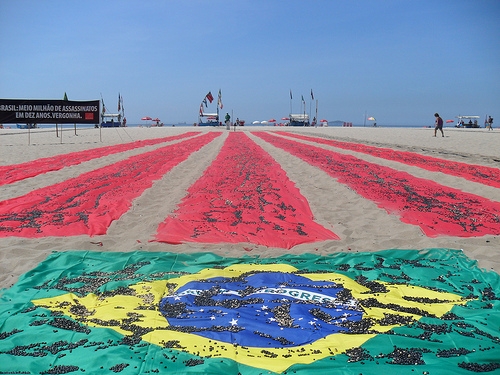 Half a million beans, two-thirds black and one-third white, reflect the ethnic makeup of one decade of murder victims in Brazil. Credit: Fabíola Ortiz/IPS

RIO DE JANEIRO, Dec 5 2012 (IPS) - Human rights activists in Brazil mobilised Wednesday to draw attention to the fact that half a million people have been murdered in this South American country in the past 10 years.

On Copacabana beach in Rio de Janeiro, 500,000 beans were scattered on the national flag and on 40-metre-long strips of red carpet,, in a protest organised by the local NGO Rio de Paz.

Hundreds of passersby stopped to gaze at the symbolic rivers of blood, which ran up to a wooden cross and a sign reading: “Brazil: half a million murders in 10 years. SHAME.”

“We want a structural reform and the professionalisation of the police, who are plagued with serious corruption problems,” the president of Rio de Paz, Antônio Carlos Costa, told IPS.

“We are also calling for the transformation of the penitentiary system, because inmates live in subhuman conditions, without any prospects for reintegration in society. And we want every state to set homicide reduction targets,” he added.

The organisation has held peaceful protests in large cities since 2007. This week it organised demonstrations in Brasilia, the federal capital, and São Paulo, Brazil’s biggest city, after the non-government Sangari Institute released a Map of Violence in Brazil, with the latest statistics.

The activist said “157 murders a day were committed between 2001 and 2010. In 2010 alone, 57,000 people were killed. We want the statistics on crimes and violent deaths to be released in a timely, transparent manner in all states” in this country of 194 million people.

According to Rio de Paz, those most at risk of being murdered are poor black men between the ages of 18 and 25

“The number of homicides in the black population, which accounts for two-thirds of all of the deaths, is growing. Public policies for poor communities are needed. It is impossible to achieve peace in a consumer society that is as unequal as ours,” Costa said.

The Map of Violence, subtitled “New patterns of homicidal violence in Brazil”, shows that murders among the white population have fallen steadily since 2002, while they have risen steadily among blacks.

In the early hours of Wednesday morning, 10 Rio de Paz activists arrived at Copacabana beach to set up the installation.

“The red carpets represent blood, and of the 500,000 beans, two-thirds are black and one-third are white, representing the proportional ethnic makeup of the victims. The idea is to give people a chance to visualise the number of people killed,” Costa said.

He said he believes the years of mobilisation and protests have helped bring about some positive changes.

The overcrowded prisons of the civil police were closed, and the Rio de Janeiro state government, which did not have targets for reducing the homicide rate, now includes such objectives in public security planning, he said.

Another change, he said, is represented by the “Police Pacification Units” (UPPs), permanent community policing bodies that are set up in favelas or slums previously dominated by drug trafficking groups. The constant police presence is accompanied by an increase in spending in the areas of health, sanitation, housing and education.

“We had long been calling for a peaceful ‘occupation’ (of the favelas),” Costa said. “There have been improvements, but they have been smaller than we had dreamed. We wanted an in-depth reform of the police and the work they do.”

According to surveys by the Institute of Applied Economic Research, nearly 80 percent of respondents are afraid of being murdered.

The overall figure of half a million murder victims is similar to, or even higher, than the number of victims in some countries at war or caught up in internal armed conflicts.

The civil war in Somalia, which broke out in 1991 and is still raging, has left a death toll of around 500,000, according to different sources. And just over 200,000 people were killed during Indonesia’s 25-year military occupation of East Timor.

The new statistics are not surprising, because they reflect the state of public security in Brazil and Latin America, criminal attorney Gustavo Teixeira, a member of the human rights commission of the Instituto dos Advogados Brasileiros, told IPS.

“The most frightening thing is that many deaths occurred in confrontations with the police and other state agents,” he said.

“We have a construct of public security that emerged in the time of the (colonial) empire and during dictatorships, and which took on the shape of an armed military police. This is a sentiment that takes years to build.”

In his view, elite security forces armed to the teeth should not be the rule when it comes to patrolling the streets, to avoid accidents like stray bullets, which kill many people, for one thing.

A reform of Brazil’s penal code, which dates back to 1940, has been the focus of heated debate. But it would not necessarily cut crime rates, Teixeira said.

If all of the existing criminal laws were actually enforced, things would be different, he added.

“If our constitution and criminal legislation were enforced, our reality would be more humane,” Teixeira argued. “It ‘s not about creating more laws, but about putting in practice the existing ones, and equipping the judicial police, which are civil, federal forces, with the means to carry out quality investigations.”

He added that higher quality police work would give a major boost to the judiciary’s ability to hold effective trials.

The sensation of impunity arises from the delays in trials, he said. “The justice system moves at a snail’s pace because of a shortage of judges, but also because of the poor quality police investigations – not because of the lack of laws. Increasing sentences to 40 or 50 years is not going to fix things,” Teixeira maintained.

“Brazil has sentences varying from 12 to 30 years for crimes against life. If the threat of the death penalty were enough to inhibit crimes, there would be no more homicides in the United States.”