RIO DE JANEIRO, Sep 18 2012 (IPS) - The “pacification” of the favelas in this Brazilian city, aimed at driving out armed groups and fighting drug trafficking, has not yet become a fully effective public policy, says Eliana Sousa Silva, who has lived in one of Rio’s shantytowns for nearly 30 years.

The pacification process begins when elite military police battalions are sent in to crack down on drug trafficking gangs.

Once the drug mafias have been run out of the favela, permanent “Police Pacification Units” (UPPs) are installed to carry out community policing, and spending is increased in the areas of health, education, sports and income-generating activities for local residents.

Despite the initial wariness with which the strategy was met, it has already scored a few successes. 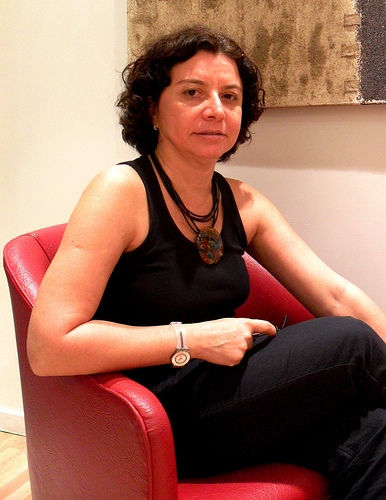 The police in Rio have not changed their attitude, says Eliana Sousa Silva. Credit: Fabiola Ortiz/IPS

However, local residents have not been made part of the pacification process, says Sousa Silva, a social worker and the founder of two non-governmental organisations, the Observatório das Favelas and Redes da Maré.

The activist, who has lived nearly three decades in the Complexo da Maré favelas and has been a witness to extensive violence and human rights abuses, recently published the book “Testemunhos da Maré” (Testimonies from Maré), which reflects life in the city’s most populous shantytown complex. (See sidebar.)

In the book, launched Aug. 23, the author presents the viewpoints of local residents, police and traffickers, with respect to the violence in the neighbourhood.

A: The UPPs are a response from the State, based on a project designed by the state government’s Secretariat of Security. They are part of an ongoing action that has a positive side: they are attempting to disarm the armed groups.

But at the same time, the strategy leaves something to be desired. It must take a step forward, in order to become a real public policy. And an important aspect is missing: understanding the population of the favelas and how they relate differently to the police.

Progress will come when the people start to see that the arrival of the state, through the police, is designed to guarantee their right to security, and not to turn local people into victims.

The residents must be incorporated into the process of pacification; they must become active participants.

A: Until the 1980s, Maré was made up of six favelas; today there are 16. These communities have become part of it since then as a result of a housing policy based on the government-financed construction of (low-income) apartment blocks.

That might explain the aspects that characterise Maré, which has become a huge favela, the biggest in Rio in terms of population. Figures from the Brazilian Institute of Geography and Statistics indicate that the complex is home to 129,400 people – a larger population than that of 80 percent of the cities in this country.

It is a complex of favelas, but with a population the size of a medium-sized city, and with structural problems of urbanisation, sanitation, rainwater drainage networks, conservation, the environment, spaces for art and culture, and the quality of its 16 schools.

Because it is near (the heavily polluted) Guanabara Bay and major freeways like the Linha Vermelha and Avenida Brasil, the air breathed in Maré is the worst in the city. There is a set of problems arising from the way the favelas emerged in the first place: the arrival of the population without the necessary infrastructure.

Q: Soon Maré will have its first UPP. What kind of expectations does the local population have?

A: There is both anticipation and fear. The UPP could have positive aspects, but the lack of clarity about how the process will play out has caused uncertainty among the local people. The police haven’t changed their attitude. (The arrival of the police) is expected to be very violent.

Q: At the ceremony held to launch your book, more than 200 copies were sold. What prompted you to write it?

A: My main motivation was to understand the process of violence of the state expressed through the police – something I have wanted to get a grasp on since I was just a girl. I saw it, and I didn’t understand why it happened.

My community activism in Maré is aimed at improving the quality of life. I helped found the Observatório das Favelas and Redes da Maré, to have an impact on the social reality there.

But the issues of violence and security had to be addressed, in order for activities on the social front to have an effect. And understanding public security became a question of utmost importance.

Q: In the book, you discuss the banalisation of violence, and you compare it to the acceptance of the Nazis: violence as an institutional approach, to maintain order. How do you explain that comparison?

A: In the favelas, it’s important to work on understanding security as a right, similar to healthcare or education, because local people there don’t have any notion of their right to security.

And in designing public policies, the idea of the right to security must be taken into account. Police actions in the favelas follow a “logic of war”.

I mention the example of the Nazi state to help people understand the gravity of the situation. Even though it is unacceptable, in that context there is a command and an order that naturalises violence, or makes drug trafficking seem justified. Even I, who was disturbed and bewildered by this phenomenon, had a way of looking at things that was influenced by these acts of violence.

Q: In your research, you gathered the first-hand accounts of local residents, and you also followed the routine of the police and of illegal armed groups. What was that experience like?

A: I wanted to understand how those three groups approached the idea of public security. How the police, important protagonists of the process, felt; how the people, who are supposed to receive that public service, felt; and what things are like in the terrain of illegal activity.

I saw a vacuum and found a lack of dialogue among the three protagonists. And I found a deeply embedded preconception about the people of the favelas, on the part of the security agents, which leads to a distorted vision of what kind of people live there, as if the entire community were involved in illegal activities.