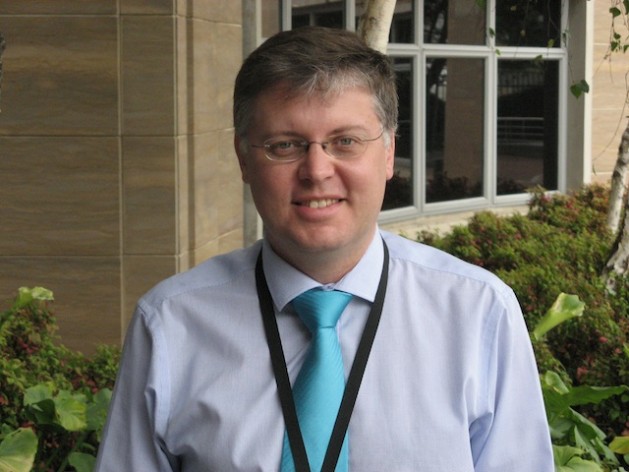 South African trade lawyer Emile Myburgh, of Johannesburg law firm Bowman Gilfillan, has not detected much response from the Brazilian and South African companies with which he deals. Credit: John Fraser/IPS

JOHNNESBURG, Dec 17 2012 (IPS) - Politicians in the leading developing nations have been active in boosting mutual ties, as one way of counterbalancing the influence of the developed world. But the economic success of the Brazil, Russia, India, China, and South Africa and the India, Brazil, and South Africa groupings will depend on the extent to which businesses take advantage of the new opportunities which are being created.

South African trade lawyer Emile Myburgh, of Johannesburg law firm Bowman Gilfillan, has not detected much response from the Brazilian and South African companies with which he deals.

“I have not seen any evidence or heard any of my clients say that business among BRICS countries is any easier than with non-BRICS countries,” he told IPS.

“Philosophically one might think the countries might promote business or attempt to attract more investments from fellow BRICS countries, but so far the practice does not show that.”

Myburgh noted that the challenges of conducting business between Brazil and South Africa are numerous, “but fortunately they are not insurmountable.

“The language issue is always important, but it is becoming less of an issue as a new generation of (Portuguese-speaking) Brazilians, who are fluent in English, enter the market.

“Brazilian tax and compliance are still major issues for South African investors, just as for any other foreign investor, but with business opportunities abounding many companies face up to the challenge and do their best to adapt.”

He has observed that South Africa presents its own problems to Brazilians.

“The first one is unnecessary hurdles put in place when Brazilians apply for work permits to work in South Africa,” he complained.

“The South African Department of Home Affairs has an unfortunate tendency to impose internal requirements for work permits which are not published and not based on law, and then to turn down valid applications for work permits.

“This is a political issue because the Department of Home Affairs seems to be under the impression that, by being unduly difficult with work permits, they protect South African jobs.”

However, he warned that the reality is that these practices destroy South African jobs “as the disgruntled investors would rather not hire a South African, invariably citing the same reason each time: the lack of capability and of suitable South African candidates.”

“Brazilians have traditionally invested strongly in infrastructure projects in those countries, and there are fewer infrastructure opportunities in South Africa than in Angola and Mozambique.

“However, Brazilian companies do invest heavily in other non-Portuguese speaking African countries, like Ghana, the DRC, Nigeria, and Tanzania, so language is definitely not the only factor,” he said.

Myburgh concluded that in future a county’s membership of the BRICS or IBSA clubs may affect where businessmen choose to form partnerships. “This may change in the future, but it is regrettably not the case today.”

Johannesburg-based consultant on developing nations Martyn Davies agreed with Myburgh that to date the business element of South-South partnerships has yet to reflect the more advanced political relationships.

“I believe these loose associations may offer benefit but most often – and due to the disconnect between business and the state – these opportunities are insufficiently exploited,” Davies, the CEO of the Frontier Advisory consultancy, told IPS.

“IBSA is primarily designed as a south-south developing grouping focused on trade liberalisation. With the prominence of the G20 and BRICS, it has lost its lustre somewhat.

“Also, without China being part of the grouping, IBSA does not have the necessary clout to drive through its policy proposals.”

Davies reported that the BRICS grouping is “undoubtedly generating the most interest and excitement amongst our clients.

“They are aware and interested, but while the macro-economic enabling environment of these emerging-market associations is obvious, the practical benefits to business are not always that apparent.

“There has been a great deal of hype around BRICS, which is generating excitement, but beyond the realm of the state and state-owned enterprises, private business is not easily able to leverage the geopolitics for commercial advantage,” he said.

Davies called for far greater and closer connections to be made between the business communities of each BRICS member state.

Johannesburg-based business leader Neren Rau, who is the CEO of the South African Chamber of Commerce and Industry, agreed on the need for more work in exploiting the opportunities presented by the BRICS and IBSA alliances, and he complained that there has not been enough strategising to date.

“The chamber’s concern is that South Africa did not have a defined strategy going into these relationships,” he told IPS.

“That being said, membership of these arrangements does create a platform, which would have otherwise not existed, for businesses which seek to pursue opportunities with other member countries.”

South Africa is hosting a BRICS summit meeting in Durban next year, and Davies said there will be a business forum for approximately 250 companies from the BRICS nations, with 50 firms from each of the BRICS members.

“There will be a great deal of media interest in the outcomes of these business discussions and the sizeable deals that will be announced by the attending heads of state of each BRICS country,” he predicted.

“I notice a great deal of interest amongst the Chinese business community in the BRICS meeting, buoyant interest from India and Brazil and perhaps less interest coming out of from Russia.

“Arguably, South Africa is embracing the BRICS meeting with the most enthusiasm.”