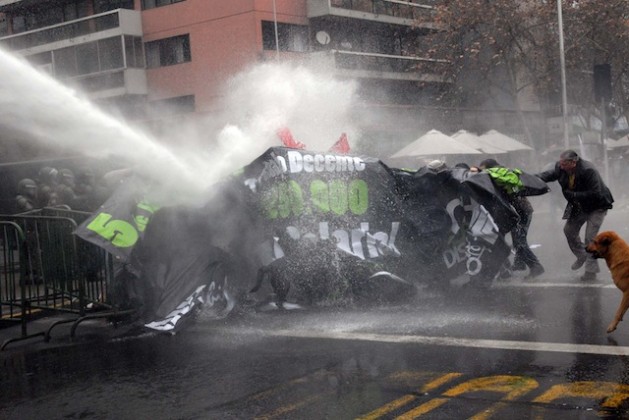 SANTIAGO, Jan 18 2013 (IPS) - Chile’s positive economic performance in 2012 is not enough to boost President Sebastián Piñera’s waning popularity, as many Chileans believe the country’s much-touted growth does nothing to compensate or solve decades of accumulated injustices, several analysts told IPS.

Chile has successfully sidestepped the European economic crisis, closing the last fiscal year with a 5.5 percent growth in its gross domestic product (GDP) and an inflation rate of 1.5 percent.

At the end of 2012, unemployment affected only 6.2 percent of the economically active population, with salaries growing at a rate of six percent, according to official figures.ries

The government hailed each of these positive indicators as proof of the strength of Chile’s economy. In an effort to showcase these achievements, a dedicated web portal was launched to highlight the progress made by the country’s right-wing administration headed by Piñera who, before running for president, was a successful businessman.

Nonetheless, the president’s popularity remains low at around 30 percent, with a significant percentage of people disapproving of his administration and only 28 percent in favour of his economic and employment policies.

Mauricio Morales, a political scientist at the Diego Portales University, explained, “The percentage of approval is determined not only by economic indicators but also by a president’s personal traits.”

“Piñera is not perceived as an honest or approachable president,” in contrast to his predecessor, the socialist Michelle Bachelet, who governed from 2006 to 2010 with an approval rate of over 50 percent.

This makes Bachelet — the current executive director of UN Women – the candidate most likely to win the October presidential elections, although she has yet to announce her decision to run.

Morales went on to say that polls usually reveal a difference between the level of approval for the economic policies implemented by a government and the popularity of its president.

However, “in Piñera’s case, both indicators are practically identical, and this shows just how relevant personal traits are” in determining popularity.

Manuel Riesco, an economist with the Centre for National Studies on Alternative Development, observed that the fact that Piñera’s low popularity has sunk so low and that Chileans are not very impressed by these economic indicators are a reflection of the “accumulated injustices” suffered by the population, which are ignored by the government.

“The discontent among Chileans has nothing to do with economic performance, but rather with the widespread abuse they have suffered over the past two decades, both in boom cycles — like today’s — and stagnation periods alike,” he said.

According to Riesco, “People mistakenly believed that the end of the dictatorship, which stretched from 1973 to 1990, would put a stop to the abuses they suffered. But unfortunately that did not happen, because while the political system was democratised, the model in place remained basically the same, with no substantial changes.”

The economist observed that “Chileans are well-informed citizens and they’re also very patient. But after 10 years their patience starts to wear thin, and it’s been 20 years now.”

In his opinion, that explains the current “new spur in mass participation in public matters. And this participation won’t subside until solutions to the most critical issues are found.”

Social protests continued in Chile throughout 2012, when a call for structural change in politics and government took centre stage, overshadowing the previous year’s struggle for democratisation of education.

While the undisputed champions of change in 2011 were students, in 2012 activism spread across society and the focus of demands shifted to environmental, economic and social issues, converging in a call for constitutional reform through the convening of a constituent assembly.

The current constitution, in force since 1980, was drafted during the dictatorship of Augusto Pinochet and is one of the regime’s legacies. Social activists say its provisions hinder the institutional development necessary for the expansion of democracy and the establishment of a more just and progressive society.

Mercedes Muñoz, who has been a teacher for almost 40 years and is now close to retirement, told IPS that the figures announced by the government are not “at all” reflected in the day-to-day lives of most Chileans.

“The government does not seem to be investing in education or health, or in anything that will make our lives better and give us a sense of security, or that will guarantee that a life’s work will provide a decent retirement, or that putting your kids through school won’t mean getting into debt for life,” she said.

Muñoz added that these positive economic indicators “are enjoyed only by the country’s wealthiest” and stressed that if Chile’s macro-economy comes out unscathed from the global crisis “it will be at the expense of the people and because of their sacrifice”.

Long held up as the “Latin American miracle” because of its dynamic economic growth and poverty abatement, Chile is also known for having one of the widest gaps between rich and poor of all of Latin America.

According to the 2012 National Socioeconomic Characterisation Survey (Casen), in 2011 the income of the richest sectors of Chilean society was 35 times more than that of the poorest sectors, down from 46 in 2009.

Riesco explained that, despite the negative perception of the population, “we should certainly be celebrating the country’s success in weathering the global financial crisis” that broke out in 2008 in the United States and which shifted its epicentre to Europe in 2010.

But he expressed concern over the fact that that success is due to an external factor: “the unusually high price of copper, the country’s main resource.”

The income from copper “is practically all rent, that is, the excess above the cost of copper production. Therefore it’s not value added by Chilean labour but a rent transferred from abroad and for the most part appropriated by the large mining companies,” he said.

Mining accounts for at least one fifth of Chile’s GDP, and as mining resources “are by definition limited, they can disappear, as occurred with nitrate deposits in the past”.

Moreover, “the price of copper will inevitably drop, bringing Chile’s economy down to its true dimensions, which is the added value generated internally, or, if you prefer, the sum of its costs of production; everything above that is rent, which is fleeting,” he said.

Less than a month into what will be a year marked by presidential and legislative elections, the government has been quick to project that by the end of 2013 the economy will have grown by five percent, inflation will have dropped at an annual rate of three percent and fiscal spending will have increased by five percent.

Despite this optimistic outlook, according to Morales if “Piñera has not yet garnered much popularity” it’s doubtful that he will do so in 2013, his last year in office, and he will “face, like never before, the loneliness of power.”