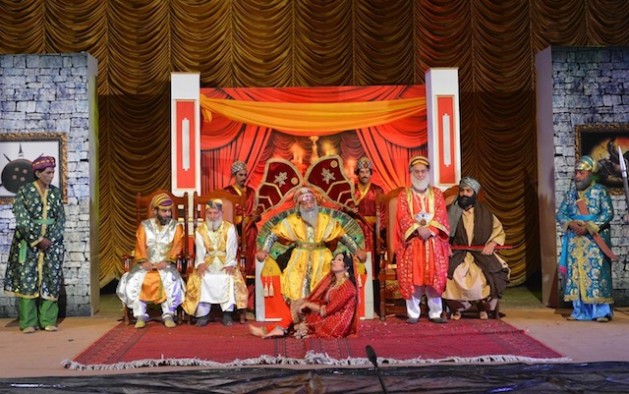 PESHAWAR, Mar 5 2013 (IPS) - The applause has continued long after the curtain came down on the last performance of Khushal Khan Khattak in the northern Pakistan city of Peshawar last month. The enthusiastic reception should have the Taliban worried.

The play is based on the life of Khushal Khan Khattak, the 17th century Pashtun warrior poet who fought Mughal rule, and who wrote with far-reaching popularity on the unity of Afghans. The play is building new cultural bridges now between Pashtuns in Afghanistan and Pakistan.

Parveen Malal, Afghanistan’s cultural attaché in Peshawar, has asked the culture department of the government of Khyber Pakhtunkhwa (KP) province in northern Pakistan to stage the play in Kabul, Jalalabad and Kandahar. The local government in KP sponsored production of the play in Peshawar.

Pashtuns on both sides of the border share strong cultural bonds through common heroes, Malal told IPS. “It is the most visible face of Pak-Afghan unity.” She added: “I am really impressed with the superb performance of the actors, the play’s script and the directorial skills.”

The Pashtun are the largest ethnic group in Afghanistan and the second-largest in Pakistan, which has the world’s largest Pashtun population.

The political significance of staging the play in present times is not lost on anyone. Khushal sent out a message of both defiance against brutal forces and peace and unity among his people and among the tribes of Afghanistan. He always spoke of Afghans instead of Pashtuns, as a mark of his desire to unite them.

“We should make use of stage drama to keep people engaged in healthy entertainment, and wean them away from going the Taliban way,” Malal said. “There is immense enthusiasm among people to watch such entertainment and forget the worst type of terrorism that has beset the region.”

Most of the Taliban are Pashtun.

Word of the play has spread to Kabul already. “I came from Kabul along with my friends to watch this great play,” says Anar Shah, a student from the Afghan capital. “We want the KP government to take this play to Afghanistan. Many of our friends were on their feet throughout the play.”

KP information minister Mian Iftikhar Hussain told IPS the play “is our endeavour to spotlight services rendered by different Pashtun heroes.” The local government, he said, is prepared to bear the cost of 300 million Pakistani rupees (three million dollars) to present the play in Afghanistan.

Hussain said that within Pakistan, the KP province government would try to stage the play in Karachi and Quetta.

The director of the play, Masood Ahmed Shah, a former award-winning producer for Pakistan Television, said he was overwhelmed by the response, especially from women who came to the three performances in Peshawar. “Many came a long way to watch the play.”

“Khushal Khattak is a great hero revered by Pashtuns on both sides of the Pak-Afghan border,” said writer Noorul Bashar Naveed. “Given the successful experience, the play could draw Pashtuns closer together.”

There is also a need to produce such plays on video, to send out a message of peace and love, he said.

Khushal says in a couplet:

(I have taken up the sword to defend the pride of the Afghans/I am Khushal Khattak, the bravest of the age)

Kaleem Khan played the lead role in the play, and used his powerful voice and strong dialogue delivery to great effect.

“I would love to perform in Afghanistan,” he said. “Doing more plays would fine-tune my acting. I was initially afraid to perform the role but later I accepted it as a challenge.”

The play reflects the multi-dimensional personality of Khushal Khan Khattak, who began as a loyal mansabdar (local viceroy) of the very Islamist Mughal emperor Aurangzeb Alamgir. He later rose against Aurangzeb and was arrested. Through the years he became a prolific poet, and his writings are now gaining new currency.

He was released from prison thanks to the intervention of the then governor of Kabul, Mohammad Amin, and began to work for the unity of Afghans.

“Khushal’s relentless struggle to promote Afghan nationalism through his poetry can still be a binding force against violence and terrorism,” said Noorul Bashar Naveed.