Treating Malnutrition Moves From the Hospital to the Home 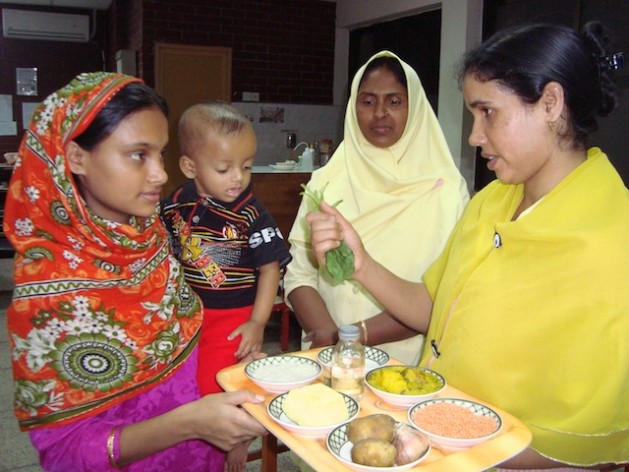 A young mother attends a training session on how to prepare ready-to-use therapeutic food with local and affordable ingredients. Credit: Naimul Haq/IPS

DHAKA, Mar 20 2013 (IPS) - When nine-month-old Borsha was admitted to the International Centre for Diarrhoeal Disease Research in Bangladesh last January, she was on the verge of death.

Suffering from a condition called severe acute malnutrition (SAM), which too many people in this South Asian country of 150 million are familiar with, Borsha was dangerously underweight.

Her 26-year-old mother, who had traveled 30 kilometres from her hometown of Dhamrai to get the best possible treatment for her baby here in the capital Dhaka, was worried the doctors would not be able to save her child.

But thanks to a timely intervention, Borsha now has another shot at life, and will not join the thousands of children here who perish from a lack of access to proper nutrition.

Borsha is the beneficiary of various attempts to curb severe malnutrition, responsible for one million child deaths per year. In Bangladesh alone some 600,000 children suffer from the condition and a substantial number of them die without proper intervention.

The condition is characterised by a severe deficiency of vital micronutrients like zinc, iron and iodine, as well as crucial vitamins. These children are at high risks of contracting a host of other infections.

Very low weight for height, thin arms, an emaciated body, swollen feet and depressed eyeballs are common signs of acute malnutrition. Children affected by the condition have a nine-fold higher risk of death compared to children with normal rates of nutrition.

Until recently the World Health Organisation (WHO) and the United Nations Children’s Fund (UNICEF) recommended that malnourished children be referred to a hospital to receive therapeutic diets along with required medical interventions.

But what saved Borsha’s life, and what experts hope will save the lives of millions of children under five years old who suffer from malnutrition here, was not hospital admission.

After over a decade of research, scientists at the International Centre for Diarrhoeal Disease Research, Bangladesh (icddr,b) found that children with severe acute malnutrition can be treated at home with ready-to-use therapeutic foods (RUTF) made from locally available ingredients.

Except in cases of unforeseen medical complications, this practice virtually eliminates the need for a potentially life-threatening journey from the home to the hospital.

In fact, icddr,b scientists found that treating children at home or within the community with RUTF reduced the case-fatality rate by up to 55 percent, and was effective on all children over the age of six months.

Dr. Iqbal Hossain, a key researcher with the icddr,b, told IPS, “The previous standardised management protocol to treat SAM was to (administer nutrition) at a slow pace at infrequent intervals with shorter durations of intravenous fluid. The new protocol we developed now is exactly the reverse: an emergency diet with longer rehydration therapy is given more frequently at a faster pace.”

“Our research since 1997 shows that the death rate fell from 17 percent to less than five percent of reported cases” as a direct result of this new management protocol, he added.

Another “secret to success”, according to Iqbal, is ‘halwa’ or ‘khichuri’: the blend of rice and lentil paste mixed with soybean oil, molasses, fine grains of cereals, chick peas, and some boiled vegetables that comprises the local ready-to-use therapeutic food supplement.

“Halwa and kuchuri… are socially and culturally acceptable, affordable and available to food insecure people,” Nuzhat Choudhury, an assistant scientist at the icddr,b told IPS.

Until very recently, the condition was managed at the hospital level in Bangladesh through inpatient therapeutic care.

Weight gain is a crucial aspect of the treatment and intensive micronutrient therapy is continued for three months, with a projected weight gain of 10 grammes per kilogramme each day.

But a majority of the cases in rural settings could not receive clinical care largely because active casefinding at the village level is rare or virtually absent.

In addition, few families in Bangladesh — where over 40 million people live below the poverty line — can afford hospital care, while most hospitals lack the facilities to handle the massive number of severe malnutrition cases.

“About 85 percent of those who suffer from SAM cannot afford hospital care or prevent the deadly condition in their communities,” Dr. Tahmeed Ahmed, the leader of the icddr,b research team, told IPS.

“To address this we have trained community health workers, mothers and other (community members) to spread techniques for managing the condition,” he added.

According to Ahmed, this is similar to the oral rehydration solution given to children suffering from diarrhoea, which is also now administered in the home.

An internationally reputed paediatrician and director of icddr,b’s Centre for Nutrition and Food Security, Ahmed helped design training courses on management of severe acute malnutrition for countries like Afghanistan, Tanzania, Uganda, Papua New Guinea and others, with the support of WHO, UNICEF and the nutrition section of the International Atomic Energy Agency (IAEA).

Mariam, whose year-old son Tanvir was admitted to the icddr,b last January, believes the trainings for mothers and community members are invaluable.

“Without the ready knowledge on managing the condition thousands of children would die. Every mother should learn how to prepare the local diet — it’s simple, easy and above all, it saves lives,” Mariam told IPS.

Doctors and nursing staff from hospitals and clinics across the country have also been trained and are now promoting best practices in rural areas, particularly in the northwestern agricultural regions of greater Rajshahi and Rangpur where food shortages are common  and children are often stunted and underweight.

While the case fatality rate in hospitals treating the condition is still as high as 20 to 30 percent, communities with knowledge of how to manage the problem have brought the fatality rate down to just five percent.

The icddr,b has plans in the pipeline to provide rural families with hygienically packaged sachets of RUTF that do not require refrigeration or cooking and can be stored at room temperature for months at a time.

The WHO cites malnutrition as the greatest single threat to global public health. Efforts like those underway in Bangladesh are bringing the world closer to achieving the fourth Millennium Development Goal, which aims to reduce the under-five child mortality rate by two-thirds by 2015.