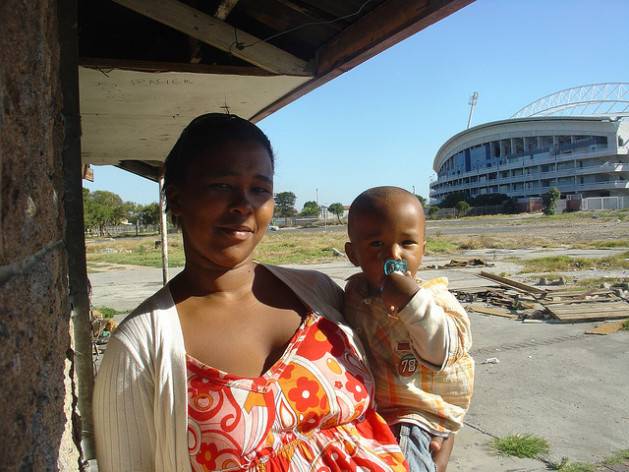 South Africa is leading in the scaling up of Kangaroo Mother Care, a lifesaving intervention that mothers can easily practice. Pictured here are Charlene Paul and her baby in front of their house, next to Athlone Training Stadium in Cape Town. Credit: Ann Hellman/IPS

JOHANNESBURG, Apr 23 2013 (IPS) - A young mother – who only wants to be identified as Karren – beamed as she nursed her newborn baby at the University of Witwatersrand’s Reproductive Health and HIV Institute, in Hillbrow, South Africa.

It is her first pregnancy and Karren had to learn, from a qualified nurse, how to hold and care for her baby.

While Karren will soon be counting her baby’s happy milestones – first smile, first tooth, first step – each year three million children die within their first month of life from largely preventable causes such as prematurity, birth complications and infection, according to international charity Save the Children.

It is a major reason why, at the end of the year, South Africa will launch Global Newborn Action Plan, which aims to reduce the number of newborn deaths here.

But South Africa is leading in the scaling up of Kangaroo Mother Care (KMC), a lifesaving intervention that mothers can easily practice, according to Dr. Gary Darmstadt, director of family health at the Bill & Melinda Gates Foundation.

“This was a paradigm-changing idea just a few years ago. No longer could we ignore the newborn period – excuses were gone. We now know of a number of simple interventions that have great potential to avert the top causes of neonatal death,” Darmastadt told IPS.

Kangaroo Mother Care is the act of holding a newborn with skin-to-skin contact. It usually facilitates breastfeeding, reduces the risk of serious infections and keeps the baby warm, thus reducing mortality of preterm infants by about half.

But these are some of the things that first-time mother Karren had to be taught. Studies estimate that if KMC was used widely with preterm babies, it could save more than 1,500 lives around the world each day.

Another critical intervention is the use of antenatal corticosteroids to help develop a preterm baby’s lungs so that he can breathe on his own. It is widely used in high-income countries with an estimated 90 percent coverage of indicated cases of women in preterm labour. If its use spreads in middle and low-income countries, it can save more than 1,000 newborn lives across the globe daily.

Darmstadt said that despite remarkable changes in the levels of understanding of newborn mortality and prevention methods, newborns continue to die and now account for more than 40 percent of all under five deaths.

“The number of newborns who die in sub-Saharan Africa has actually gone up in recent years, even while child and maternal deaths have fallen.”

In fact, an increase in preventing mother-to-child transmission and in paediatric HIV care and treatment services has made significant inroads in reducing under five mortality in South Africa.

But progress is hampered by weak health systems in heavily-affected countries, according to Dr. Lee Fairlie, a paediatrician at the Wits Reproductive Health and HIV Institute (WRHI).

South Africa now has the world’s largest programme of antiretroviral therapy, and some advances have been made with the implementation of new TB diagnostics, and treatment scale-up and integration.

Dr. Vivian Black of the WRHI told IPS that the country’s health system still faces many challenges, including a shortage of health staff and an ineffective data collection system by health officials that could result in deaths going unrecorded. She pointed out that South Africa’s health authorities were negligent in failing to collect appropriately detailed information about maternal mortality that could guide policy.

But what can South Africa learn from other Sub-Saharan Africa countries?

Koki Agarwal, director of the Maternal and Child Health Integrated Program (MCHIP), a programme funded by the United States Agency for International Development, told IPS that South Africa can learn from the successes of other countries like Rwanda and Malawi in terms of reducing infant mortality. These countries have also introduced community health workers who monitor pregnant women and collect data on pre- and post-neonatal deaths.

Darmstadt concurred. He said Malawi’s health delivery system had the support of President Joyce Banda, who has “done a lot in providing primary health care as well as supporting KMC.”

Rwanda has also had great success in reducing maternal and child deaths. Because of a programme that encourages Rwandan women to seek antenatal care with skilled health practitioners and interventions like KMC, Rwanda is on track to meet the United Nations Millennium Development Goals (MDGs) to reduce child mortality and improve maternal health.

There are eight MDGs, which were adopted by all U.N. member states in 2000 in order to curb poverty, disease and gender inequality.

“A woman’s nutritional status before and during pregnancy helps to define her own health, nutritional status and the survival of her baby at birth and beyond,” she said. “We know that encouraging women to come into care early in their pregnancy, ensuring they know their HIV status, and having them linked to appropriate interventions is the first step in eliminating mother-to-child transmission.”

Agarwal added that in Kenya, MCHIP was working to “guide mobilisation of community health workers in bringing pregnant women – and later their infants – into care.”