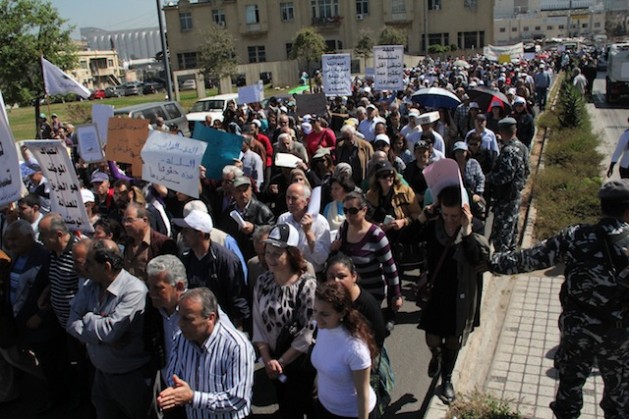 BEIRUT, Apr 1 2013 (IPS) - The surprise resignation of Lebanon’s Prime Minister Nijab Mikati eclipsed his last major manoeuvre, which was to refer to parliament a highly contentious wage scale hike for the public sector. Teachers and staff across the public sector started an open strike on Feb. 20 when then prime minister Nijab Mikati failed to send the wage scale policy – which had previously been agreed upon by the cabinet – to the parliament for vote.

The industrial action challenged the legitimacy of the government, evoked staunch opposition from the private sector and witnessed tens of thousands of protestors on the streets in the largest demonstrations of their kind for decades. During the strike near daily protests were held across the country, targeting major institutions such as government ministries, the port of Beirut and the airport.

“It is has been around 16 years since we have had a pay rise. Of course our wages are not enough to support our families. My husband has to work two jobs for us to maintain any semblance of a reasonable life here,” said protesting high school teacher Rola Romani.

Finding the means to fund a family of three, including a daughter in university, has become increasingly difficult with an accumulative rate of inflation of over 100 percent across this period eating away at the value of pegged wages.

The conflict between the unions and the private sector lobby groups revolved around how the government would fund the wage scale hike and who in society should shoulder the burden; estimated to be between 1.2 billion to 1.5 billion dollars a year. “You are not allowed to finance the salary scale from our pockets or the pockets of the poor. You must fund it through the pockets of those who have been smuggling money over the past 20 years and are responsible for our crippling public debt,” said president of the Association of State Employees, Mahmoud Haidar.

The private sector lobby group, The Economic Committees, rallied ardently against the wage scale hike on the grounds that it would exacerbate the current economic crisis. “In the prevailing economic environment of stagnation, falling foreign direct investment and so on, it will be an additional burden on the private sector and on companies and it will cripple even further economic activity and risk taking,” reasoned Nassib Gobril, head of research at Byblos Bank.

As well as concerns over the implications for the recovery of the embattled economy, private sector opponents fretted that in any case the government simply could not afford it. In the first ten months of 2012 the government’s spending outweighed its income by 2.7 billion dollars, representing an increase of over three quarters compared to the same period in 2011. With the national debt amounting to around 140 percent of the economy, there is scant enthusiasm for additional major expenses that may increase borrowing.

The unions’ response to the Economic Committees’ broadside to the pay scale hike struck at government corruption and the vested interests of the so-called ‘rentier lobby’. The vast profits of the real estate and banking sectors were cited as prime targets for raising revenue to fund the public sector wages.

“The lobbies that are linked to the financial sphere and the real estate sphere act exactly as a government who taxes activities. When you increase the price of land or the price of borrowing you are acting not at the level of production but are taxing the whole economy,” said Charbel Nahhas, former minister of labour.

The unions and their supporters maintained that ample revenues for the wage hike could be raised through taxes on the capital gains from land transactions, increased taxes on interest revenues, fines for the rampant occupation of public property and a clampdown on corruption at the port of Beirut.

The argument was that not only would it raise the required revenue but it would also help rebalance the economy towards the productive sectors such as manufacturing and agriculture, benefiting the wider population.

Mikati’s decision to refer the pay scale draft law to the parliament is to some degree a success for the public sector workers. Among the proposed means to pay for the hike are increased taxes on certain luxury goods, a 15 percent tax on capital gains from real estate transactions and fines for illegal constructions on public coastline.

However, parliament still needs to vote the draft law into effect and in the wake of Najib Mikati’s resignation the country’s political parties are preoccupied with securing their alliances and fortifying their constituencies. In the short term at least the public sector workers’ struggle is likely to be sidelined by the planned upcoming elections and the vulnerable security situation across the country.