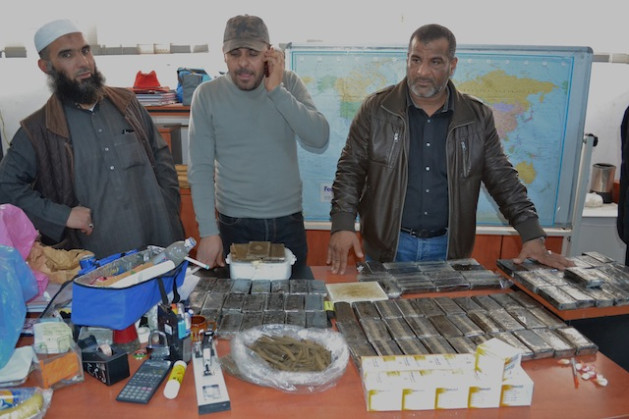 Abdulhakim Belhasi (r), the spokesperson for the Libyan special police unit set up in 2012 under the crime squad to fight drug and alcohol trafficking, with two men from the sqaud. Credit: Maryline Dumas/IPS

TRIPOLI, Apr 4 2013 (IPS) - In Libya, a dose of LSD or the painkiller tramadol costs 78 cents, and a joint of cannabis is 7.80 dollars. Here, drugs are affordable to the poor for a simple reason. “Slashing prices is a way to create demand and open up a market,” a Western diplomat tells IPS in Tripoli, the capital.

“Prices will go up when enough people are hooked,” the diplomat, who works on defence and security, adds.

There is currently no data on the number of addicts in Libya, but the drug trade is thriving. Dr. Abdullah Fannar, the deputy director at a psychiatric hospital in Gargaresh, a wealthy suburb in east Tripoli, has noticed a change in the number of drug addicts they see there.

“The number of people suffering from addiction to illegal substances has increased. We used to have a special department for drug addiction 10 years ago, and are thinking of reopening it.”

According to Fannar, the drug epidemic has hit “the youth and rebel soldiers suffering from post traumatic stress disorder from the war.” Other vulnerable groups — those with little education and military veterans — are easily drawn to drugs and alcohol, both of which are illegal in Libya. In early March, several dozen people died as a result of poisoning from methanol contained in locally adulterated alcohol.

Drug and alcohol trafficking are not new to Libya. Under former President Muammar Gaddafi (1969-2011), a number of United Nations reports made reference to the illegal trade between Africa and Europe via Libya. But with limited border controls under the new Libyan government, the drug trade has grown.

“We know we have a problem of alcohol and drug smuggling, especially on our southern borders,” Colonel Adel Barasi, the spokesperson for the Ministry of Defence, admits to IPS. “We are working on a surveillance strategy, training and equipping the army. God willing, the Libyan army will be able to protect our borders.”

Céline Bardet, an expert on war crimes and transnational crime, tells IPS that drug routes are drawn up at a global level, targeting unstable countries where security is weak.

“This is how things stand in Libya. There is a great deal of trafficking, and it’s likely to get worse,” she says.

Bardet, a consultant with the European Commission, believes that drug processing laboratories may exist in Libya, even if none have been found yet. Still, she points out: “The police are starting to tackle the problem with the support of international aid.”

In an eastern district of Tripoli, a special police unit set up in 2012 under the crime squad is proud to demonstrate the results of its fight against drug and alcohol trafficking.

Abdulhakim Belhasi, the spokesperson for the unit, showed IPS the seizures – seven kilogrammes of heroin and cocaine, unknown amounts of cannabis, 1,400 tablets of tramadol, unknown quantities of whiskey and vodka, and 1,400 litres of adulterated alcohol. The seizures are stored in a hangar, to be destroyed.

In the last drug seizure, which was announced on Feb. 23 by the spokesperson of the Libyan Navy, Colonel Ayoub Gacem, 30 tonnes of drugs were seized and three people were detained on a boat intercepted by Libyan coast guards the day before. The type of drugs found was not specified.

“A war is being waged through the drug trade. They want to destroy the moral fabric of our youth. It can only be Gaddafists in neighbouring countries driving this trade. They are the only ones with this kind of money,” Belhasi tells IPS, appealing for international assistance.

A young drug user who wishes to remain anonymous laughs off this statement. “Having a drink and smoking a joint has never hurt anyone! The ‘beards’ (Islamists) are hounding us so that they can impose Sharia law.”

Khaled Kara, a member of an anti-drug organisation, and former mayor of Souq-al-Juma, a district in Tripoli, denies this. “I wear a beard, I look like an Islamist but I am a moderate,” he tells IPS.

Kara is worried. “The drug traffickers are very violent. They will do anything to protect their business. They are better armed than the special unit. They have rocket launchers, while the police only have handguns.”

The men of the special unit say they would like to be better armed, and add that they also face other kinds of pressures. “My 18-month-old son was kidnapped,” says an officer who goes by the single name of Kamal for security reasons. “He was only taken for a few hours, but when I found him, there was a message for me. ‘If you don’t resign, next time it will be your wife.’”

Asked by IPS if he is afraid, Kamal, who is admired by his comrades for his acts of bravery during the revolution, simply replies: “I am here, I am working.”

But most members of the special unit go out in the field wearing balaclavas.