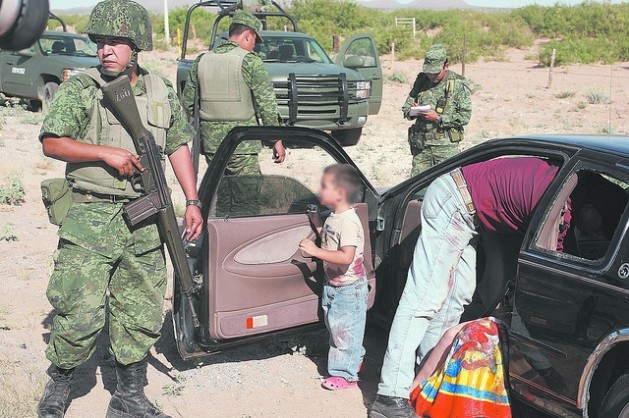 Mexican soldiers at the scene of a crime near the U.S. border. Credit: Courtesy of El Diario de Ciudad Juárez

MEXICO CITY, Apr 5 2013 (IPS) - The Mexican government is considering using the armed forces, which face serious human rights accusations from their involvement in the war on drugs, to collect socioeconomic data from the low-income households that will benefit from the National Crusade Against Hunger.

Government sources told IPS that the advantage is that the army has the logistical capacity to collect the information, since it has bases and detachments in the regions where the 400 municipalities selected for the anti-hunger programme, announced by President Enrique Peña Nieto a few weeks before he took office on Dec. 1, are located.

There are also enough soldiers, as the armed forces have 210,000 troops, of whom about 70,000 are taking part in the war on drug trafficking, according to the defence ministry.

The government’s aim is to verify that people are effectively eligible to apply for the social programmes, in order to keep the rolls from being inflated, as it presumes happened during the government of former president Felipe Calderón (2006-2012).

The National Crusade Against Hunger is to meet the needs of 7.4 million people living in extreme poverty and with severe nutritional deficits. Some 3.7 million of these people live in urban areas, and the rest live in the countryside.

In Mexico at least 52 million people out of the total population of nearly 117 million live below the poverty line, 11.7 million of them in extreme poverty, and 28 million do not have enough food.

The government plan seeks to eliminate hunger by ensuring adequate nutrition and eradicating acute child malnutrition, while improving indicators of growth in children under five. It also aims to increase small farmers’ production and income, minimise post-harvest losses and waste of food, and promote community participation.

Peña Nieto also plans to modify the anti-drugs strategy implemented by Calderón, who after taking office in December 2006 ordered the deployment of thousands of soldiers to fight drug cartels that are disputing the distribution routes to the lucrative U.S. market.

Among the strategies under consideration are the creation of a national 100,000-strong police force, greater intelligence capacity to prevent serious crime and a strengthened justice system.

When Calderón sent out the army, its long track record of abuse and impunity came into play. The defence ministry and the state National Commission on Human Rights (CNDH) say 359 military personnel were involved in rights abuses between 2006 and 2012. Of these, 186 have been indicted, 110 prosecuted, 38 sentenced, 8 acquitted and 17 are fugitives at large.

During that period, the CNDH received over 8,000 complaints about soldiers. And 168 have been presented since last December, for abuses such as sexual violence, torture and homicide.

It concluded that “almost none of these abuses are adequately investigated, exacerbating a climate of violence and impunity in many parts of the country.”

The government says that when the army returns to the barracks, it may provide personnel for other tasks, like the National Crusade led by the social development ministry.

It is also considering launching an awareness-raising campaign in local communities, to make the possible presence of soldiers a more welcome prospect and thus facilitate their work.

NGOs consulted by IPS did not want to speculate on an announcement that has not yet been made. But they did say it was not suitable to involve the armed forces in further civilian tasks.

The inter-ministerial Crusade Commission, made up of 16 ministries and three other government agencies, is due to decide whether to use troops in its mission over the next few days.

The Crusade will include: the formation of community committees and municipal and state councils; agreements with companies and civil society groups; and the creation of networks. A Citizen’s Council is also planned, headed by the president and comprising representatives of civil society, state governors and members of the inter-ministerial Commission. A committee of experts on food, nutrition and poverty will also be set up.

But “we haven’t had a single meeting, nor has the government called for proposals,” Ximena Maroto, coordinator of the Observatory on Social Policy and Human Rights, which groups six NGOs, told IPS. “It’s important that there should be a transparency mechanism to deal with suggestions. And mechanisms for community participation are lacking – we don’t know how people are going to be mobilised.”

The government is carrying out two pilot projects in the southern state of Guerrero, home to 46 of the 400 municipalities selected for the Crusade. Other municipalities are in Oaxaca (133), Chiapas (55) and Veracruz (33), also in the south.

It has also signed agreements on measures and budgets with 11 of Mexico’s 32 states, but their contents are unknown.

“It’s a gargantuan, slow task which requires inter-ministerial coordination at all levels of government. The structure is highly complex,” said Maroto.

The government intends to measure the decline in the number of people lacking access to food, and in the proportion of children under five who are underweight, stunted (low height for age) or suffering from acute malnutrition, as well as the percentage of the population with good eating habits, and the reduction of illnesses derived from poor diets.

It will also track the increase in spending on income support programmes for people in the selected municipalities, and keep statistics on food production.

Furthermore, it will count the number of Mexicans taking part in the Crusade, the number of volunteer hours donated, the number of participating social organisations, companies and academic institutions, and the percentage of states, municipalities and communities that form councils and committees to fight hunger. It will also assess public approval levels for the Crusade and for the government itself.