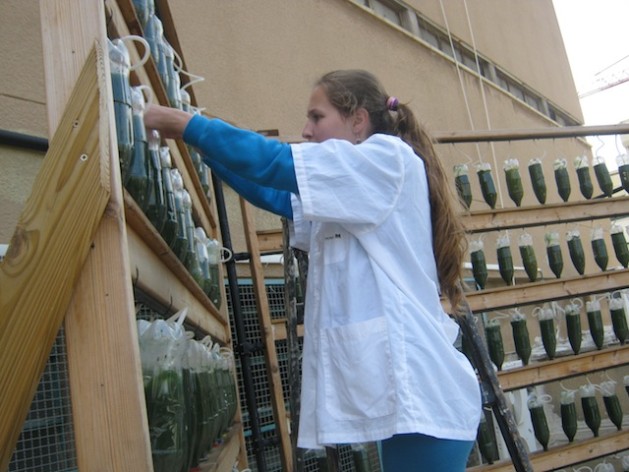 One of the students at the Gymnasia Herzliya School checks on the plastic bottles containing samples of a blue-green algae called Spirulina. Credit: Pierre Klochendler/IPS

TEL AVIV, May 12 2013 (IPS) - At the Gymnasia Herzliya School in Tel Aviv, 20 ninth and tenth graders are testing the simplest, cheapest and fastest way to solve the problem of malnutrition among their peers around the world.

Under the guidance of their principal and biology teacher, these Israeli teenagers are attempting to breed a blue-green algae called spirulina, widely believed to contain a miraculous array of vitamins, minerals and nutrients.

Fourteen-year-old Miri Wolozhinski says her involvement in the experiment stems from a desire to help “those in need”, while her classmate, Anouk Savir-Carmon, rails against “the absurdity that in the 21st century there are still hungry children.”

According to a United Nations report released last October, nearly 870 million people, or one in eight, suffered from chronic undernourishment between 2010 and 2012. The World Health Organisation (WHO) says malnutrition is caused by “inadequate or unbalanced food intake or … poor absorption of food consumed.”

The students here believe they can help rectify this bleak situation. Having studied the various properties of the microscopic algae, Savir-Carmon explains to IPS, “Sixty to 70 percent of its mass is protein; the rest contains carbohydrates, antioxidants, Omega-3 fats, vitamins, minerals – in short, everything needed for nourishment.”

A study published by the U.N. Food and Agriculture Organisation (FAO) in 2008, based on an experiment conducted in Mexico, showed that 10 grammes per day of powdered spirulina supplement were sufficient to combat child malnutrition.

The same study showed that severely malnourished infants admitted to a village health clinic in Togo recovered within weeks of taking 10 to 15-gramme doses of the dietary supplement mixed with millet, water and spices every day.

Known in the scientific community as multicellular photosynthetic Cyanophyceae, the algae is thought to have existed in salt water and some freshwater lakes for over three billion years.

It is considered a “complete protein”, containing all nine essential amino acids that human beings need to survive. Commonly dubbed a superfood, spirulina eclipses all other whole foods such as unpolished grains, beans, fruits and vegetables and non-homogenised dairy products.

Although the algae develops naturally in tropical lakes in Central and Eastern Africa, the derived dietary supplement – sold as flakes, pills or tablets – comes with a hefty price tag and is available only in select natural and health food stores.

Convinced that the prohibitive cost is a result of large-scale and ineffective breeding methods requiring expensive equipment, students at Gymnasia Herzliya are determined to find cheaper ways of growing the cyanobacteria.

Using the Internet as their guide, students taught themselves everything they could about the algae’s taxonomy, structure, nutritional benefits and growth conditions.

At first, each pupil was assigned the care of one recycled plastic bottle containing a sample of the culture. Since spirulina, like any other plant, needs carbon to photosynthesise, the students would simply “shake the solution every two hours,” recalls Savir-Carmon.

Four months ago, their algae advisor Boris Zlotnikov devised a more efficient system, arranging rows of bottles on a discarded wooden stand and hooking them up to an electric system of pumps, pipes and thin hoses that breathe air into the solution, stirring the algae constantly. “It now grows very fast,” notes tenth grader El’ad Dvash.

Last week, as the solution took on a dense emerald colour, they celebrated their first harvest, drying the biomass outdoors.

“With 650 litres of algae culture, we produced the equivalent of 65 kilos of dry matter,” boasts Dvash.

The class retained some algae in a makeshift reservoir in order to test more archaic breeding methods, without using electricity.

“We’re busy formulating a protocol for ultimate spirulina breeding – in pools, bottles, under various weather and economic conditions, with or without electricity, instruments or resources,” 15-year-old Ori Shemor tells IPS.

“We still have to conduct a series of experiments which will take into consideration light, temperature and humidity variations,” Shemor explains.

Already the project has generated a buzz, with researchers at the Bar-Ilan University’s Algae Biotechnology Centre volunteering to help the budding scientists devise a model to increase the algea’s protein concentration.

The United Nations Educational, Scientific and Cultural Organisation (UNESCO) has offered to help the students circulate their protocol through its Associated Schools Project, a global network connecting nearly 10,000 education institutions in over 180 countries, while Rotary International has shown a willingness to partially fund the project.

Last month, an Ethiopian education official visited the breeding premises in Tel Aviv. The governments of South Africa and Lesotho have also expressed interest in the project, said Ze’ev Degani, the school’s principal and the brains behind the initiative.

He told IPS the pilot project has the potential to reach between 700 and 1,000 schools around the world. “Half a million children will be growing spirulina in pools and bottles for themselves within two years,” he predicted.

Though the students have registered their experiment under a start-up company entitled Algeed, they are determined to resist the laws of the free market.

Rather than sell the supplement, Savir-Carmon says he and his classmates will “transmit our knowledge to help other pupils around the world grow it for themselves.”

Some have criticised the experiment for having lofty goals, but Degani believes it has a clear rationale – to create a new kind of food chain based on solidarity, until food autonomy prevails and malnutrition becomes extinct.

A student of the renowned educator and philosopher Paulo Freire, Degani is of the firm opinion that teaching and learning must go beyond the walls of a classroom to touch the lives of those who struggle to survive war, poverty, and inequality.