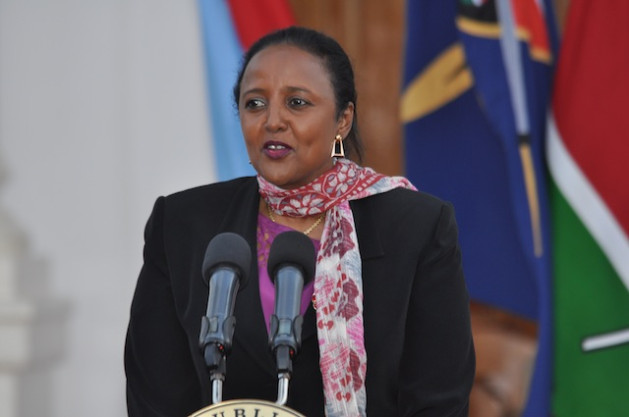 Amina Mohamed is the first woman to be nominated head of Kenya’s Ministry of Foreign Affairs. Credit: Brian Ngugi/IPS

NAIROBI , May 9 2013 (IPS) - Kenya’s nominees for cabinet secretary positions, who include an unprecedented number of women – six out of 18 – will undergo a gruelling public vetting process by the Parliamentary Committee on Appointments Thursday.

Despite the appointments – which are yet to be confirmed – women’s rights organisations in this East African nation say President Uhuru Kenyatta’s new government must do more to seriously mainstream gender issues in the country.

Kenyatta made history on Apr. 25, when he nominated the six women to the cabinet – the highest number the country has had since independence.

The nominees include former diplomat Raychelle Omamo, who was proposed to head the sensitive Ministry of Defence, a docket which has never before been held by a woman.

And Anne Waiguru, an economic and public policy expert, is expected to head the critical Ministry of Devolution and Planning, which will coordinate the implementation of Kenya’s new devolved system of government in 47 counties.

Earlier, on Apr. 23, Kenyatta and his Deputy William Ruto had announced the nomination of Amina Mohamed as the first woman to head the Ministry of Foreign Affairs.

But ahead of the vetting process, which will pave the way for the tabling of the list of nominees in parliament for debate, approval and subsequent confirmation, Maria Nzomo, the first Kenyan woman to obtain a Ph.D in political science and international studies, from Dalhousie University in Canada in 1981, told IPS that despite the historic appointments, women here still lag far behind men on a number of fronts.

She said many of them continue to suffer from restricted access to health care, education, political participation and cultural life, as well as legal protection and economic opportunities.

Consequently Nzomo, who teaches at the Institute of Diplomacy and International Studies at the University of Nairobi, said the government must do more to address the plight of Kenyan women.

“Women lack required skills, access to affordable credit or even better education, meaning therefore that they are perennially disadvantaged to men and can only survive by plying informal sector jobs,” she said.

Her comments were echoed by Grace Mbugua, the executive director of Women’s Empowerment Link, a non-governmental national women rights organisation, who told IPS that empowering Kenyan women would take more than the nomination of the six women to the cabinet.

“While we must say that we appreciate that President Kenyatta’s administration actually complied with the constitutional requirement regarding appointment of women in public offices, this is not the glass ceiling for Kenyan women and the state must do more if we are to bridge the gender gap in Kenya,” she said.

The nominations mean that once the nominees to the 18-member cabinet are finally vetted and approved by parliament, the cabinet will meet the one-third gender threshold provided for in the Kenyan constitution as part of a principle of affirmative action.

Article 81 (b) of the constitution provides that “not more than two-thirds of the members of elective public bodies shall be of the same gender.”

The Kenya Supreme Court ruled in December 2012 that a constitutional provision calling for a mandatory one-third gender representation would not apply to the 2013 general elections but instead should be implemented progressively by August 2015.

According to the World Bank’s annual World Development Report 2012, efforts at empowering women in developing countries like Kenya have over the years considerably paid off, yet despite achievements in the advancement of women’s rights and privileges, gender inequality gaps between men and women in key areas of society still persist.

Highlighting this, Mbugua told IPS that the government must now create and implement mechanisms to bridge the existing gender inequalities.

“It must for instance create the proper structures to encourage women in leadership through continually reforming laws surrounding elections to enable more women to participate fairly in elective politics and ascend to decision-making positions,” she said.

According to Nzomo, the appointment of six women to the cabinet may not necessarily translate into the prioritisation of a women’s agenda for the cabinet due to what she terms the entrenched patriarchal decision-making nature of the government.

“Numbers in the cabinet are not enough to enhance gender equity as the Kenyan governance framework is still male-dominated and hostile to women’s participation,” she told IPS.

Nzomo, however, said the move was a step forward in the right direction for women’s empowerment, considering the significance of the ministries the six women have been tapped to head.

“It is a signal of good will, but we are a long way from that point where we can say Kenya has attained gender equality and equity,” she said.

But according to Wambui Kanyi, the executive director of the women’s lobby Women Political Alliance Kenya, the appointment of the six women will create needed awareness that women too can hold critical dockets. She said most Kenyans at the grassroots level still lack confidence in women’s leadership, going by the outcome of the country’s recent elections.

In the country’s Mar. 4 general elections, no female candidate was elected to the 47 gubernatorial or senate positions up for grabs.

Women’s rights organisations blamed this poor performance on a controversial ruling against the implementation of a gender quota in parliament by Kenya’s highest court.

“Women were disadvantaged in the elections because of this ruling as well as cultural barriers and financial constraints to mount campaigns, and this tells you that while the executive may believe in women’s leadership, the story is different at the grassroots,” said Kanyi, adding that the state must do more to create awareness and support women’s participation in leadership.