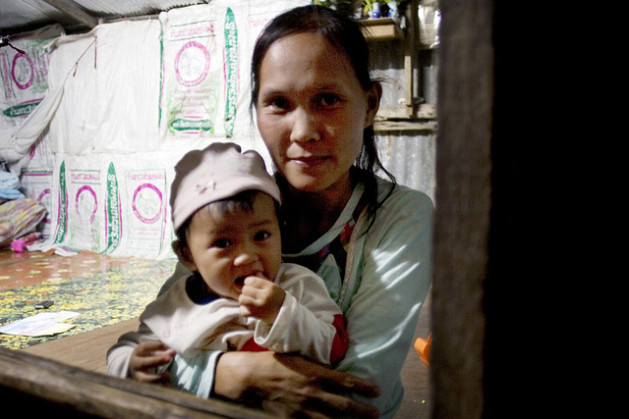 Mu Kyi, a migrant worker in Thailand, fears for the future of her children. Credit: Simba Shani Kamaria Russeau/IPS

BANGKOK, May 7 2013 (IPS) - In the hustle and bustle of Thailand’s capital, Bangkok, a small learning centre located in the Bang Bon district is helping children hailing mostly from the war-torn provinces of Myanmar (Burma) gain access to a basic education.

Established by the Foundation for Rural Youth (FRY), the learning centre is one of the few that offer Thai language lessons to migrant youth, and prepare children for entrance into Thai schools, by “introducing them to Thai culture”, Pao Hom, an organiser with FRY, told IPS.

Most other learning centres for migrants lack methodologies specifically targeted at early childhood development, and few are recognised by the Thai Ministry of Education.

Although teachers that come through FRY are “trained in early childhood development under the supervision of the Ministry of Social Development and Human Security,” according to Hom, many of the teachers do not have formal educational qualifications.

Hom says migrants who come here to avail themselves of low-paying jobs in Thailand’s many garment, textile and furniture factories struggle to educate their children. Immigrant communities and neighbourhoods are some of the “worst environments for learning,” she said.

Dr. Panadda Thanasetkorn, a professor at Mahidol University’s National Institute for Child and Family Development, told IPS that without professional training for teachers and a better formal education system, migrant children will remain trapped in the cycle of poverty and unemployment that plagues these border zones.

Located in the heart of Southeast Asia, Thailand has long been the final destination for massive human migrations, as hungry, unemployed or war-weary residents from neighbouring countries flock to its industrial border towns and bustling urban centres.

Recent statistics from the Labour Ministry estimate that there are nearly 2.5 million migrant workers from Lao People’s Democratic Republic, Myanmar and Cambodia in Thailand – nearly half of whom are undocumented.

In addition, the United Nations High Commissioner for Refugees (UNHCR) has said there are some 84,900 registered refugees and an estimated 62,000 unregistered asylum-seekers in nine camps along the Thai-Myanmar border.

At least 10 percent of this population are estimated to be children. A 2011 report by the International Labour Organisation (ILO) suggests that there were approximately 377,000 children from neighbouring countries residing in Thailand.

Lacking social protections and legal status, migrant children represent one of the most disadvantaged groups when it comes to early childhood development, a critical period that the World Bank defines as occurring between birth and eight years of age, during which a child’s rapid brain growth forms the basis of their future physical, emotional and cognitive development.

Although migrant children are eligible to attend state schools in Thailand, a number of barriers prevent them from fully accessing their right to education.

According to Thanasetkorn, “Most parents of migrant children do not speak Thai, are without legal documents and fear discrimination, which prevents them from approaching public social services (such as education, health care and the justice system).”

She said children who fall in the “low-income” bracket – meaning from families who earn between five and 10 dollars a day – often sacrifice going to school in order to work and support their families. The shrimp industry, fisheries, sugar cane plantations and garment factories have all come under scrutiny after a 2012 PBS documentary exposed widespread use of child migrants in these sectors.

According to Thanasetkorn, preventing child labour requires early intervention in the form of education, to equip children with the skills they need to “improve their quality of life”.

In 2005, under the Education for All (EFA) policy, the Thai government extended the right to education for all children in Thailand regardless of their legal status.

However, a recent report by VSO International Thailand/Myanmar suggests that less than 20 percent of registered migrant children attend Thai schools. This estimate is likely to be lower for early childhood development.

VSO International Researcher Hattaya Wongsaengpaiboon says there is a major disconnect between policies that seem to exist solely on paper, and practical barriers to accessing educational facilities.

“Thai policy clearly states that anyone, regardless of legal status, can attend Thai schools but in reality very few do,” Wongsaengpaiboon said. “Many of the Thai schools we approached would request a birth certificate or a letter of recommendation from either a Thai person or a local organisation” before agreeing to enroll a student.

Given that only a third of the migrant children born in Thailand have birth certificates, the stringent admission rules lead to questions “about child protection and the right of every child to have an identity,” she stressed.

According to the United Nations Children’s Fund (UNICEF), nearly five percent of all births – or roughly 40,000 children – go unregistered in Thailand every year, most amongst vulnerable groups including migrant children and those from ethnic minorities.

Thailand has taken some steps towards confronting this issue, particularly with tools like the 2010 Civil Registration Act, which grants all children born in the country the right to birth registration regardless of status.

This also aids migrant children in accessing the educational system, health care and better employment opportunities in the future.

But here again, activists and advocates have found that while such policies look good on paper, things are not nearly so rosy on the ground.

“What we discovered in our research was that families were not always informed by the hospital staff that they had the right to provide their children with birth certificates,” said Wongsaengpaiboon.

Migrant learning centres like the one in Bangkok have been taking the first steps towards bridging this gap. According to Hom, civil society “partnerships with government-run schools break any barriers to migrant children receiving a Thai education. By taking this route, children are far more likely to enter the university system and break the cycle of poverty.”

However, unlike FRY, which receives generous funding from major donors like USAID, Save the Children and the European Union, many informal institutions that are not recognised by the Thai government and receive little to no funding are unable to provide services like the state’s free lunch programme, forcing many migrant children to attend school without proper nutrition.