WASHINGTON, May 22 2013 (IPS) - Following on Nawaz Sharif’s victory in the May 11 national elections in Pakistan, many analysts are indicating cautious optimism on the prospect that the new prime minister can strengthen bilateral relations with the country’s neighbours, particularly India. 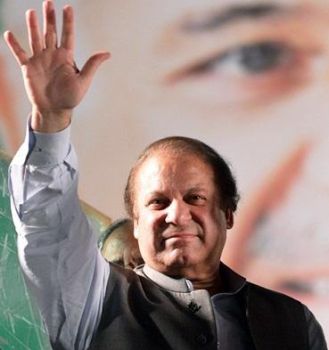 Nawaz Sharif addressing a public gathering in 2012. Credit: cc by 2.0

While entrenched interests among Pakistan’s powerful security establishment constitute one prominent obstacle to any such optimism, a more significant hindrance could be scepticism among the country’s other two neighbours – Afghanistan and Iran – over Sharif’s own past, including his dealings during his two previous stints as prime minister.

For the moment, Sharif himself is attempting to stoke this optimism. During his election campaign, Sharif pledged to revive India-Pakistan relations, which soured during Pervez Musharraf’s presidency from 2001 to 2008, and during a post-election phone call Indian Prime Minister Manmohan Singh expressed his wish for a “new course” between the two countries.

Following through on this vow, however, will be very difficult. Pakistan has long used ethnic tensions against India, as against Afghanistan, and changing this policy will require both a new mindset and a new set of convictions.

Sayeed Salahudeen, chief of the Muttahida Jihad Council (MJC) and the Hizb-ul-Mujahedeen, a powerful separatist Kashmiri militia group believed to be based in Pakistan, has already warned Sharif not to abandon the “Kashmir cause” over “friendship with India”. As long as “Kashmir is under India’s occupation”, Sulahudeen continued, “the national security of Pakistan, the safety and security of its borders, and its economic stability is at stake.”

Pakistan’s support for Kashmiri militants has been an essential part of Pakistan’s approach toward India, and any attempt to end this will take time. During his election campaign, Sharif stated that the Kashmiri conflict “needs to be resolved peacefully, to the satisfaction of not only both countries but also of the Kashmiri people.”

Sharif also promised a full investigation into the Kargil conflict, the 1999 incident in which Pakistani soldiers and Kashmiri militants infiltrated Indian side of the Line of Control, setting off a major crisis between the two nuclear powers. Sharif, who was prime minister at the time, has long claimed that Musharraf, as the military commander, had acted on his own, although another Pakistani army general insisted in January that Sharif himself was not as ignorant about the plans as he has said.

The new prime minister has also said he plans to investigate the alleged involvement of Pakistan’s powerful Inter Services Intelligence (ISI) agency in the 2008 Mumbai bombings, another key action that would please India but thoroughly aggravate powerful elements within the Pakistani establishment.

The India-Pakistan conflict is today deeply rooted, and governments in Pakistan, both civilian and military, have for decades viewed India as a strategic rival. Indeed, the potential “threat” from India has consistently been the army’s justification for its massive budget.

While civilian governments have generally opposed increasing military expenditures, the military-intelligence establishment continues to exert considerable influence, particularly in foreign and security policymaking. Sharif’s post-election statement that the prime minister would now be “the army chief’s boss” was an attempt to mitigate this concern, but it remains unclear whether he will be able to effectively follow through.

Sharif appears to hope that expanding economic ties between the two countries will weaken resistance to enhancing relations between the two long-time rivals. India’s economy has grown at a much more rapid pace than Pakistan’s over the past decade, and building stronger commercial ties to its giant western neighbour offers Islamabad perhaps the most direct route to getting its own economy out of the doldrums.

While Sharif has established a certain credibility regarding his desire for better relations with India, the same does not hold true for Afghanistan where the new prime minister does not enjoy much popularity.

This is due not only to his support for warring jihadi factions in 1992, but also because Pakistan under his watch became the first country to recognise the Taliban as the legitimate Afghan government in 1997. In addition, Afghans have yet to forget Sharif’s attempt to impose Sharia law in 1999, the same set of decrees the Taliban brutally imposed in Afghanistan.

In his congratulatory message to Sharif, Afghan President Hamid Karzai expressed his hope that the two countries would be able to cooperate “to root out terrorism”. However, this was viewed mostly as a formality.

“If Pakistan’s political officials want to show good faith,” an Afghan news website states, “they have to confront terrorist groups inside Pakistan that are organised by ISI.”

Indeed, concern over an uncomfortably close association between Sharif and the Taliban intensified during the candidate’s pre–election gathering in Lahore. If he won, Sharif promised, he would pull Pakistan back from the U.S.-led international “war on terror” coalition. If such a statement were not meant to “blackmail” the United States, an editorial in Afghanistan’s Hasht-e Sobh newspaper stated, it means “he is serious in what he is saying.”

In a separate interview with the Hasht-e Sobh, Mahmoud Karzai – Hamid Karzai’s brother and a possible presidential candidate for Afghanistan’s 2014 election – accused Pakistan of attempting to annex Afghanistan, the prospects for which the country “tasted during Taliban rule”.

Such rhetoric refers to an old dispute over the British-drawn boundary that divides Pakistan and Afghanistan as well as Pashtun tribal areas, though the region continues to be prone to frequent violence and remains a source of tension between the two countries. Whether Sharif can dispel such suspicions will yet another challenge he faces in improving ties with his neighbours.

Iran, which also accumulated its share of complaints about Islamabad’s behaviour under Sharif in the 1990s, is not expected to play a primary role in Pakistan’s regional policies, barring a major event such as a military crisis or controversy around gas pipelines.

Contrary to some analyses, any Iranian scepticism regarding the new Pakistani government is not related to the Islamabad’s alleged support for Sunni insurgents in Balochistan province, on the Iranian side of the border. In fact, Iran and Pakistan have established a cooperative relationship on this front.

Rather, scepticism stems, again, from Nawaz Sharif’s support of the Taliban during the 1990s, as well as his close associations with Saudi Arabia which, among other support, gave him safe haven during the years he was exiled from Pakistan after his ouster by Musharraf in 1999.

Iran and Afghanistan almost went to war in 1998, after Taliban militants murdered Iranian diplomats in Mazar-e Sharif. Because of Sharif’s support for the Taliban, as well as his close ties to Riyadh, Tehran’s chief rival in a region that has become increasingly polarised along sectarian lines, Iran’s hard-line media has reacted with concern to his return as prime minister.

Among other things, Tehran is concerned about the fate of the cross-border natural-gas pipeline between Iran and Pakistan despite strong U.S. opposition. Pakistan desperately needs Iranian gas to meet its growing energy needs, and outgoing Pakistani President Asif Ali Zardari and Iranian President Mahmoud Ahmadinejad inaugurated the final construction phase of the pipeline in March.

Pakistan received 500 million dollars to start building the pipeline in its territory, running through Balochistan into Karachi, and the deal is clearly to Pakistan’s advantage.

However, if a story by one influential Pakistani newspaper is true, that deal could now find itself in jeopardy. The Dawn newspaper has reported on Sharif’s rumoured suggestions to Saudi Arabia that “he may be open to reviewing the Iran-Pakistan gas pipeline.”