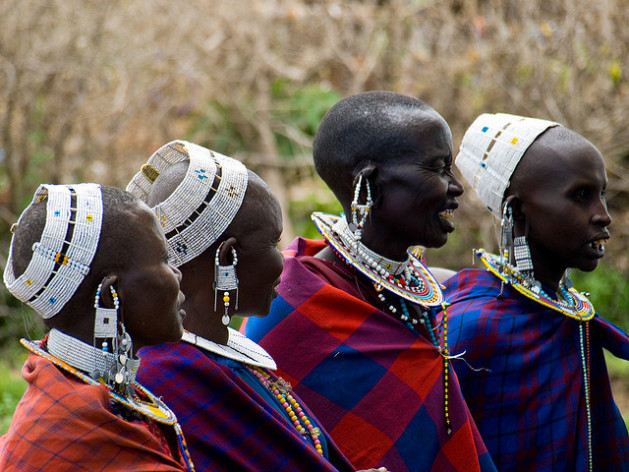 UNITED NATIONS, May 9 2013 (IPS) - The Maasai tribe of Kenya and Tanzania has long been a beacon of traditional culture to many Africans – and for Westerners on safari through Maasai Mara, Samburu or Amboseli, a familiar face.

But familiarity and travels aside, the tribe faces many of the same roadblocks on the path to development as any other marginalised community around the world.

William Kikanae, community leader of his Maasai village in Maasai Mara, recently spoke with IPS in New York during the launch of an initiative to provide economic opportunities for local tribeswomen by the Spanish footwear brand Pikolinos.

“First, I know for myself that women are the most important part of the family,” Kikanae told IPS. “(But) for Maasai people, women are not important. They don’t have power like a man.”

As an Adcam director for Kenya, Kikanae works with brands overseas like Pikolinos to cultivate projects that allow the women of his community to earn money.

Through the Maasai Project, local women embroider sandals that are then sent to Spain for finishing and sold all over the world, with the proceeds going back into community development projects such as schools, clinics and housing.

“Before, the men of my community thought that I supported women to be in power more than them,” Kikanae said in regards to the Maasai Project.

“We’re not going against anyone. I can say now that even our politicians are proud of the project,” Kikanae added.

According to a female government officer and doctor from the Maasai tribe, who asked that her name be withheld, supporting women and propelling them to the forefront of development is a significant way to achieve change among the Maasai.

“Women cannot own livestock they look after, but if educated these things will change. All is not lost for those who did not go to school, however. If allowed by their men to trade in milk, handicrafts, they can generate income for their families,” the Kenyan officer told IPS.

Poor communities are always subject to exploitation and misrepresentation when it comes to aid, so when a tribe like the Maasai partners with an organisation abroad, it is only natural for scepticism to arise.

“I think the problem here stems from the middlemen. These are the guys who are supposed to connect the community with the ‘helpers’. These people will use the opportunity to exploit the community to realise their own ambition with very little of the help reaching the beneficiary,” the officer told IPS.

“Since education has lagged behind, the few educated individuals have used the ignorance of the majority to their own benefit. So, in a nutshell, the common villager may not be able to differentiate this.”

The women of the Maasai are hardly in denial when it comes to their lack of education. They understand that the more people are educated within their community, the fewer will fall victim to exploitation.

But old patterns persist. In many local African villages, it is a well known fact that only if a young girl is rendered useless to her family – unwilling to marry young, reluctant to perform household duties and chores, or go to the garden and dig – would she be sent off to school to study. This caused a division in opportunity and kept education inaccessible to those who desired it.

Additionally, the lack of basic needs at home such as electricity or transportation to school greatly hinders the performance of a rural student. As the officer told IPS, “You can imagine trying to do homework by firelight or walking long distances to and from school.”

From an outsider’s point of view, it may seem that the Maasai women cannot catch a break, from lack of health services – especially in regards to maternal health where many women still die during childbirth – to the spread of HIV/AIDS, a topic that most do not feel comfortable talking about.

“Men go to towns, sells cows or work, have relationships with town women and bring the virus home,” the officer said. “The women have not heard of condoms or negotiating for safe sex.”

As in other societies around the world, the spread of HIV/AIDS is directly linked to education, and when children don’t receive information on sexual health, the perpetual cycle of disease continues.

Added to these concerns is the growing problem of displacement.

“Large tracts of Maasialand are being sold by men, sometimes without the knowledge of their wives. From Kitengela to Namanga on the border this is happening. This land is being bought by other communities and before long the Maasai will be in the back of beyond in extremely hard to reach areas. The current leadership is too short-sighted to see this catastrophe in the making,” the officer added.

Asked what is needed to facilitate development among the Maasai, the officer said, “There is need to for good leadership to guide this process so that there is no exploitation.”

With education and good leadership, the obstacles that the tribe face are slowly tackled. One by one, Maasai women are more likely to reassess the needs of their entire families and surrounding community, whilst working together with local and international organisations to bring about measurable change, she said.