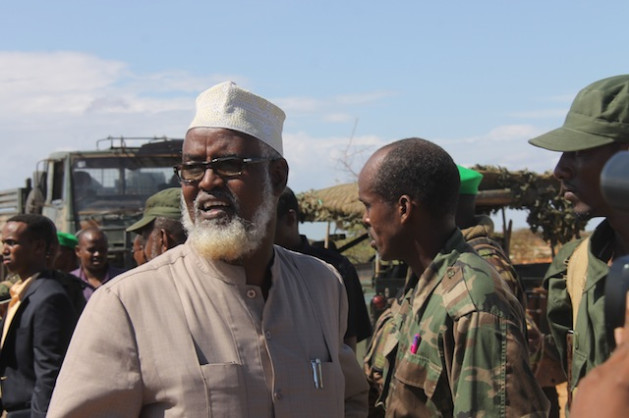 MOGADISHU, May 31 2013 (IPS) - Attempts by clan elders and militia commanders in southern Somalia to form an autonomous state, without the consent of the central government but with the apparent backing of foreign countries, remains a dangerous, destabilising element in the region, say analysts.

“Jubaland has all the dangerous elements necessary to kick the stabilisation plan of the liberated territories down like a sand castle,” Abukar Arman, a former diplomat and widely-published political analyst, told IPS. He was speaking of towns and regions in this Horn of African nation that were recently liberated from Al-Shabaab control by regional troops.

On May 15, the senior militia commander Ahmed Mohamed Islam, better known as Sheikh Madobe, declared himself president of a self-declared autonomous state known as Jubaland, which comprises the Lower and Middle Juba provinces as well as the Gedo region. The latter borders Kenya.

Islam is said to have close ties with Kenyan forces stationed in the key port city of Kismayo, which is the commercial capital of Jubaland.

The Somali government refused to recognise any of the “presidents”.

Somalia is still recovering from almost two decades of war, and large parts of the country were once under siege by the Islamist rebel group Al-Shabaab. However, with the help of regional forces, the Somali government was able to recapture some key points in the country in 2012.

The move comes after a mission sent by IGAD – which comprises eight Horn of Africa countries – reported its findings to a meeting of the bloc’s heads of states and governments in Addis Ababa. The regional grouping has been overseeing the situation in southern Somalia since Kenyan troops, who are part of the African Union Mission in Somalia, ousted Al-Shabaab from the region in 2012.

Since then, efforts by militia leaders allied with Kenya have been underway to form the autonomous administration of Jubaland.

Arman said that Somalia was faced with “armed militias, clan lords and foreign (intruders with) competing interests,” as well as an ambiguous constitution that did not clearly specify how federal states would be formed and that deferred some of the key issues.

The Somali government has voiced its discontent about the formation of any administration in the area from the outset, and described the process as “unconstitutional”, stating that it would create tribal divisions.

Abdirashid Hashi, deputy director of the Mogadishu-based Heritage Institute for Policy Studies, an independent think-tank, disagrees with Arman about the position of the constitution. He said that the constitution is “very clear” on the formation of federal Somali states.

“It’s the politicking, obfuscation and doubletalk of politicians that creates and fuels the ongoing drama,” Hashi told IPS in Mogadishu.

With regard to how federal states will be formed, Article 49 of the Provisional National Constitution (PNC) stipulates that “the number and boundaries of the regional states shall be determined by parliament.”

However, before determining the number and boundaries of the federal member states, parliament is required to nominate a national commission tasked with studying the issue. According to the PNC, the commission has to submit a report of its findings and recommendations.

But since the constitution was endorsed almost a year ago, no such national commission has been formed.

Article 49 (6) of the PNC seems to further complicate matters, as it states that “based on a voluntary decision, two or more regions may merge to form a federal member state.”  This is where the bone of contention lies.

It appears that, on one hand, the constitution gives the authority to form autonomous states to the 18 regions. But on the other hand, it calls on parliament to determine the number and boundaries of autonomous states the country will have.

Mohamod Hubey, a constitutional lawyer in Mogadishu, said the constitution is ambiguous regarding the sensitive issue of federalism in Somalia, but adds that the differences can be overcome if parties are willing to cooperate.

“The issue of federalism is a sensitive one as it is not clear-cut in the constitution which region will form a state with which, and clan balance in each region is not uniform, but all these can be resolved if there is will on the part of those concerned,” Hubey told IPS.

The perception that foreign involvement is complicating the Jubaland issue is widespread.

“Kenya for a while wanted to establish in southern Somalia a buffer zone administrated by friendly locals. Hence its support for the creation of Jubaland,” Hubey said.

Kenya has repeatedly dismissed these claims as “baseless and unfounded” and says that its troops are in Somalia to enhance stability in the region.

Nonetheless, many Somalis see Kenyan involvement in their country as being beyond security concerns.

The southern part of Somalia is strategic, rich in resources – particularly marine resources – and agriculture. It is also where the port city of Kismayo, the third-largest city in Somalia, and a potential commercial hub, is located, said Hashi

He added that many interpret “Kenya’s bellicose posturing on the Jubaland issue” as having to do with the oil deposits around the Somali coast. In 2012 there was controversy and some tension between the two nations when Kenya allegedly awarded exploration contracts in contested waters.

“Some even go as far as to claiming that there are concerted international schemes aimed at swindling Somalia out of its territorial waters and the oil under it,” Hashi told IPS.