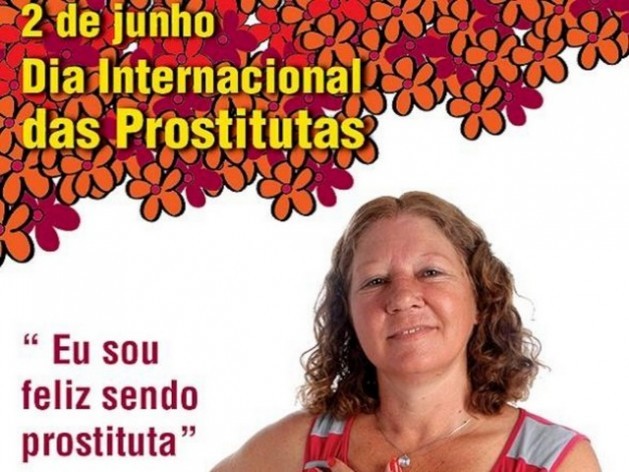 RIO DE JANEIRO, Jun 12 2013 (IPS) - Happiness, the subject of endless philosophical discussions, has now become the focus of controversy in an HIV/AIDS prevention campaign aimed at prostitutes in Brazil. The campaign chief has been booted out and a further question has been raised: What are the limits of popular participation in the definition of public policies?

Before the Health Ministry campaign was even broadcast, shocked conservative sectors complained that it condoned prostitution.

As part of a strategy against HIV/AIDS, the slogan “Sou feliz sendo prostituta” (I’m happy being a prostitute) arose from national debates and workshops involving the targeted participants.

“(The slogan) expresses the dignity of our profession. To remove that phrase is a violation of our rights, especially because of the social stigma we suffer,” said Leila Barreto, of the Group of Women Prostitutes in the northern state of Pará.

The campaign, run by the department of sexually transmitted diseases (STD), AIDS and hepatitis, resulted in the dismissal of the head of department, Dirceu Greco, and the resignation of two assistant directors.

“It was a great disappointment,” Barreto told IPS. “The stronger we are, the less vulnerable we will be to diseases, unless society says: these women do not exist. But they do exist, and their work contributes to society,” she said.

The anti-AIDS campaign, which had not been authorised by the ministry’s advisory office for communications, included other statements such as “O sonho maior é que a sociedade nos veja como cidadãs” (Our greatest dream is for society to see us as citizens). It had barely gone out over the internet on Jun. 2, International Sex Workers Day, before it was withdrawn.

The version that replaced it reverted to the old-fashioned style: advice to sex professionals about the importance of using condoms and encouraging them to seek preventive measures in public hospitals.

In Brazil, AIDS is concentrated in the big cities, where most of the at-risk groups are to be found. Prevalence is 5.9 percent among drug users, 10.5 percent among men who have sex with men and 4.9 percent among women professional sex workers.

“The preventive measures we advocate work for any person, whether they are ‘happy or sad.’ It is not the Health Ministry’s business to make assessments of the state of mind of individual persons,” a communiqué from the ministry said.

Some people complain of a “regression” in Brazil’s anti-HIV/AIDS strategy, which was considered one of the boldest and most effective in the world.

“Brazil taught the world, with the concept of AIDS prevention, that at-risk and historically excluded populations like homosexuals, prostitutes and drug addicts are citizens who have rights, and that this is the stance to take when speaking of prevention,” Agustín Rojo, an Argentine expert on communications and HIV, told IPS.

But in this country, where conservative evangelical churches have great political clout, “there is a risk of ‘killing the programme off’ by mixing religion with public health,” said George Gouveia, of the Grupo pela VIDDA, an HIV/AIDS patients self-help group.

That risk is already a reality in the view of Greco, who attributes his dismissal to disagreements “over a policy based on human rights and valuing the populations that are most at risk,” due to a conflict with “the conservative policy of the present government” of centre-left President Dilma Rousseff.

He mentioned other cases as examples, such as the banning of a carnival video that showed a relationship between two men, and a cartoon strip for schools on homophobia and sexuality.

“They can’t treat us as if we were in the closet. If they don’t grant us visibility, we will continue to feel that our rights are curtailed,” Julio Moreira, the president of the gay rights group Arco Iris, told IPS.

In Rojo’s view, the issue is that the state “should allow sectors that are discriminated against to have a voice and visibility, in order for society first to recognise their existence and then to listen to them – but it is not for the state to take on each and every one of their positions.

“When a woman who is paid for sex publicly says that she feels happy, she is expressing more than a personal feeling. To be perfectly clear, she is stating a political position,” said Rojo, a sociologist who has coordinated official policies in Argentina on AIDS and other STDs.

In this case, “being happy” with what one does, like being “proud” of one’s sexual orientation, is a legitimate vindication of a social group, he said.

But the expression “cannot be transferred automatically to a government-run mass media campaign, because it will not be easily understood by everyone. The state has no business telling prostitutes they cannot be happy, but it shouldn’t applaud, or not applaud, their choices,” Rojo said.

“On the other hand, if any citizen, whether a prostitute, transvestite or drug addict, does not have access to condoms to take care of his or her health, or does not know how to use them or where to go for help – this is a problem for the state to address, whether in the case of a sex worker or a homemaker, a homosexual or a heterosexual,” he said.

Brazilian Health Minister Alexandre Padilha made similar comments. “I respect the groups and movements who wish to send that message (about being happy), but that is their role,” he said.

Now discussions are centred on the scope of a call for social participation in real politics.

“Designing a campaign for gays, prostitutes or prisoners is in itself a recognition that grants dignity to these persons,” Rojo said.

“It puts them on a level with the rest of the citizenry…which is a powerful political decision. It confronts stigma from the heights of power, with the message that ‘we do not care only about rich heterosexuals, but also about poor gays, prostitutes, transsexuals and so on, because to us they are all equal’,” he said.

“By selecting only one particular message among those created by the workshops, the government is rejecting the concept of equality, because prostitutes are denied the right to express their dreams and ideals of citizenship, and the affirmation of their identity and social visibility,” said Gabriela Leite of Davida, a sex workers’ group.

She said it was “arrogant to believe that a prostitute can’t be happy.”

A profile of Brazilian prostitutes drawn up by the Health Ministry contributes to the quantification of this relative happiness.

The majority of female sex workers are between the ages of 20 and 29, have not completed primary school, and are proud of being able to support their children. They do not suffer discrimination in the public health service, they like the freedom of their work, and they consider that it pays better than other jobs.

However, they feel humiliated and discriminated against, they avoid telling others what they do, especially their children, and they are forced to put up with unpleasant clients and those who refuse to wear condoms.