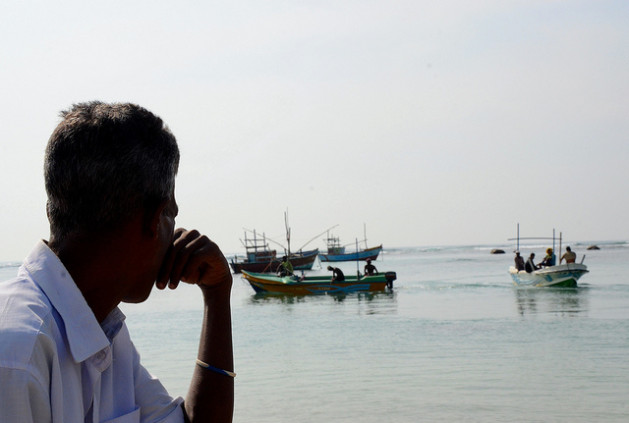 Twice in 20 months, dozens of fishermen have perished in shallow waters off the Sri Lankan coast due to the absence of an early warning system. Credit: Amantha Perera/IPS

COLOMBO, Jun 12 2013 (IPS) - It was several hours before dawn when Afthas Niflal, a young fisherman in southern Sri Lanka, felt the sea start to rumble beneath him.

He was no stranger to the shallow waters off the fishing harbour in Beruwala, a small coastal town in the Kalutara District, about 50 km south of the island’s capital, Colombo, but nothing could have prepared him for what he experienced on the morning of Jun. 8.

“It was like the sea rose up, taking my boat with it,” the young man told IPS three days after his harrowing encounter. “Then the wind picked up and began tossing us around like sticks.”

Within minutes, a gigantic wave had topped the small boat, pitching Niflal and his companion into the stormy waters. He estimates that it was about 2.30 a.m. when they ended up hanging for dear life on to the sides of the capsized fishing craft.

“It was pitch dark, we could not see anything and the sea was howling like a deranged monster,” he said. When an Air Force helicopter finally picked them up nearly six hours later, the two exhausted men had all but given up hope.

Once safely back on land, they learned that gale force winds, which have become increasingly common in this South Asian island nation, had left 51 fishermen dead, while 16 were still missing out at sea.

Although it took many people by surprise, the tragedy this past weekend was not the first time in recent months that unsuspecting fisher folk have lost their lives to sudden and savage turns in the weather. This time, though, the loss of life has shed a critical light on the government’s early warning system – or lack thereof.

On Nov. 25, 2011, 29 fishermen in almost the same areas perished when furious winds tore through the southern coast, rousing the shallow waters into a deadly tempest. Eleven of those who lost their lives hailed from the village of Kaparatota, about 60 km south of Beruwela.

But the incident failed to spur the government into action. According to Niflal, none of the fishermen out on the sea on the morning of Jun. 8 received any communication or warning that the weather would turn rough.

Most traditional fishermen in Sri Lanka rely on weather bulletins carried on national TV or radio stations. Often, their best chance for communication is via mobile phones that have patchy coverage up to several kilometres out at sea.

But fishermen say updates from the Sri Lanka Meteorological Department are “annoyingly cryptic” at the best of times.

Three days after the most recent storm, for instance, the department noted: “A few showers will occur in the Western, Sabaragamuwa, Central and Southern provinces”, but failed to specify the consequences of fishermen heading out to sea.

The Department’s website released its storm warning at three in the morning on Jun. 8, by which time, according to survivors, the winds had already swept inland, leaving hapless fishermen struggling in the water.

At a time when extreme and erratic weather has become the norm in Sri Lanka, these ambiguous updates are nothing short of fatal.

“We are looking into means of improving our capacity and our forecasting resources,” S H Kariyawasam, director-general of the Meteorological Department, told IPS, adding that for the past 15 months the Department has been constructing a new and improved radar, known as the Doppler Radar, capable of detecting fast moving weather systems and providing detailed forecasts on the quantity of rainfall.

Other experts say that even if they had received red alerts, fishermen, like most of their countrymen and women, would not have had the knowledge or capacity to seek safer conditions.

There is also an urgent need for public awareness campaigns across Sri Lanka’s coastal belt, to educate fishers on how to respond to alerts when they come.

Meanwhile, the agency tasked with public dissemination of warnings under the 2005 Disaster Management Act, the Disaster Management Centre (DMC), says it never received a formal alarm from the Meteorological Department, and was therefore unable to spread the word ahead.

Ironically, just a fortnight prior to the latest tragedy, confident DMC officials told IPS that the country’s disaster preparedness levels were adequate to meet the challenges of increasingly fitful monsoon rains, which have wreaked havoc across Sri Lanka in the last year.

Forecasts for the coming months indicate no change in these patterns, suggesting the urgent need for a hard reckoning with the country’s existing mechanisms, which were found seriously wanting last weekend when coastal communities were woken not by a national disaster alert but by the roar of 100-kmph winds barreling in from the sea.

In fact, some authorities in towns like Beruwala would not even have known that hundreds of fishermen were caught in the gale had it not been for a school teacher living close to the harbour, who phoned the nearest police station when it became clear that the storm was not a passing gust of wind.

In other coastal towns like Dehiwala and Rathmalana, about 10 km south of Colombo, residents furious at the delay in launching rescue operations barricaded the main coastal rail line with their boats, refusing to budge until Navy boats and Air Force choppers were mobilised in an official search for the missing.

It was one of these choppers that subsequently found and rescued Niflal and at least ten other survivors last weekend.

Confronted by a wave of outrage on the streets and in the media, Sri Lankan President Mahinda Rajapaksa appointed a committee comprised of retired weather specialists to look into the tragedy and report to him “the reasons as to why affected people were not informed of the impending severe weather conditions in order to be able to take precautionary measures.”

Although such retrospective measures come too late for those who lost their lives, they may end up preventing unnecessary deaths in the future.