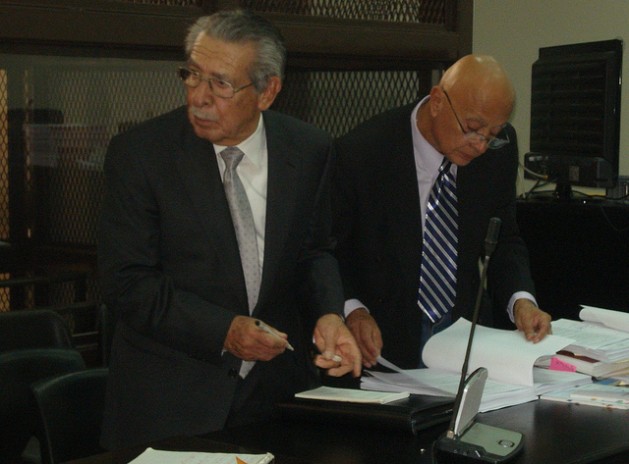 GUATEMALA CITY, Jun 11 2013 (IPS) - Fear and mistrust reign in Santa María Nebaj. The people of this Maya Ixil indigenous town in the highlands of northwestern Guatemala are worried about intimidation attempts to keep them from testifying again in a retrial of former dictator Efraín Ríos Montt.

Worry began to spread in the town when the witnesses learned they could be summoned to court again to tell their heart-wrenching stories in a new trial, after Guatemala’s Constitutional Court overturned a genocide conviction against Ríos Montt in response to one of the numerous challenges presented by the defence.

Ríos Montt had been sentenced to 80 years in prison on May 10 after he was found guilty of overseeing the armed forces’ murder of at least 1,771 Ixil indigenous people during his 1982-1983 rule – the bloodiest period of the 1960-1996 civil war.

The Constitutional Court ruled that the proceedings should be voided dating back to Apr. 19, when one of the judges suspended the trial over a dispute with another judge about who should hear it.

Under Guatemalan law, a retrial cannot be held in the same court. But because of the backlog of cases in the court where the new trial is to take place, it is not scheduled to start until April 2014.

The court had ruled that Ríos Montt “held absolute power (from March 1982 to August 1983) and as a result had full knowledge of the crimes committed and did not bring them to a halt even though he had the power to do so.”

In the same trial, his intelligence chief, José Mauricio Rodríguez Sánchez, was acquitted on the grounds of insufficient evidence of involvement in the crimes against humanity in question.

The ruling against Ríos Montt was historic, not only for Guatemala but for many other countries in Latin America and other regions, because it was the first time a head of state has been tried for genocide by the courts in his own country.

Just days after 98 Ixil survivors testified in the trial about gang rapes of girls and women, torture and mass killings, several people came to the town saying they belonged to a government agency for agricultural development and claiming they were carrying out a census.

But the visit by the purported government officials awakened suspicion, because they only went to the homes of those who testified in the trial, and they already had the witnesses’ personal details, such as their names and identity document numbers.

Local residents reported the incident to the local offices of the Centre for Legal Action on Human Rights (CALDH), one of the groups that brought the lawsuit against Ríos Montt.

CALDH found that no such agricultural development agency was registered, and filed a complaint with the prosecution service and the office of the human rights ombudsman, demanding safety guarantees for witnesses and survivors.

During the first trial, the victims were determined to fight for justice despite fears for their safety. “Since I started to fight I haven’t been afraid. I have confidence in what I am saying. We need a real sentence,” Ixil leader Antonio Caba told IPS on Apr. 12, just a few days after testifying in court about the massacres and torture he witnessed at the age of 11.

Helping survivors overcome their fears and become ready to speak in court about such painful, traumatic experiences was a lengthy process that took years of psychological support, CALDH spokesman José Rodríguez told IPS.

According to the 1999 report by the United Nations-sponsored Historical Clarification Commission (CEH), under Ríos Montt the army and paramilitary militias known as “civil self-defence patrols” committed 334 massacres and 19,000 murders and forced disappearances, and destroyed 600 villages. As a result of the violence, one million people fled their homes.

The CEH was created to investigate human rights abuses and crimes against humanity after a peace agreement between the army and the insurgent Guatemalan National Revolutionary Unity (URNG) put an end to the war in 1996.

Something happened on the way to the forum

Throughout the trial, the defence presented a volley of challenges based on technicalities.

“Since the start of the trial, the defence attorneys have tried to trip up the proceedings through challenges and injunctions, and they finally managed to do so,” Ramón Cadena, director of the Central America division of the International Commission of Jurists (ICJ), told IPS. “What has prevailed here is malicious litigation that finally ended in a ruling that leads to more impunity.”

The Constitutional Court has not yet clarified whether the change in venue means the trial must start from scratch.

According to Rodríguez, the interpretation by the CALDH lawyers is that it must start over, which means the 98 witnesses would have to testify again.

But due to the setbacks, the survivors have lost faith in the justice system, and over half of them have said they are not willing to give their testimony again, and especially not in the face of tension and attempts at intimidation in the Ixil communities.

“The victims have said they are not a toy, to be summoned to court over and over again. They put their trust in the justice system, and now they feel they have been let down, and they are afraid,” Rodríguez said.

Cadena said he had little hope that a new conviction against Ríos Montt would be achieved if a new trial was held.

“Although judges are showing greater independence, there are economic interests that are not going to allow the powerful to be tried,” he said.