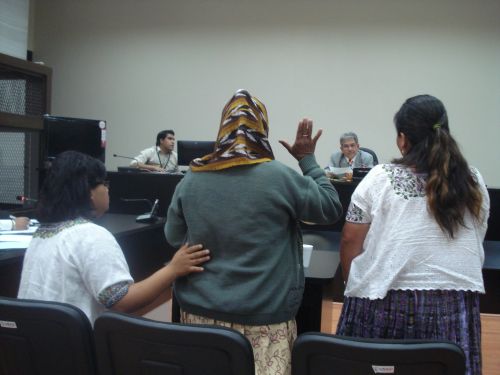 One of the victims testifying before the judge, with the support of a psychologist and a translator. Credit: Danilo Valladares/IPS

GUATEMALA CITY, Sep 28 2012 (IPS) - “In the garrison they had rooms where they would rape us; sometimes there were three, four or five soldiers,” Rosa Pérez*, one of the women used by the Guatemalan army as a sex slave during this country’s civil war, testified in court.

With her face covered, and with the support of a psychologist and a translator, a crying Pérez told a court hearing this week that members of the army kidnapped her husband and turned her into a sex slave and servant in the Sepur Zarco military garrison in the municipality of El Estor in the northeastern province of Izabal.

She and 14 other Q’eqchi Maya Indian women who were subjected to sexual and labour slavery between 1982 and 1986 testified at a preliminary hearing held this week in a court in the Guatemalan capital.

Charges have been brought against 37 members of the military in the case.

“Go to the garrison, the soldiers need someone to wash their clothes, cook their beans, and make them coffee,” Peréz said she and the other women were told by military commissioner Miguel Ángel Caal.

She said they did not imagine the appalling treatment and abuse that they would suffer for so many months in the military garrison.

“They told me that if I didn’t let them, they would kill me, and they put a gun to my chest” while she was raped by different soldiers after washing their clothes and cooking and serving their meals from six in the morning, she added.

“Once I gathered my courage and went to complain to the lieutenant, and he told me that maybe I had got them used to doing that,” said Pérez, who miscarried as a result of the constant sexual abuse.

She also said that before she was taken to the garrison, the soldiers had kidnapped her husband, the father of her three children. She knew nothing about his fate until his remains were found decades later.

Some 200,000 people – mainly Maya Indians in the country’s highlands – were killed and 45,000 were forcibly disappeared in Guatemala’s 1960-1996 armed conflict. The bodies were buried in secret mass graves, unmarked graves in cemeteries, or on the grounds of military installations, according to the Historical Clarification Commission.

In its 1999 report, that U.N.-sponsored truth commission found the army guilty of over 90 percent of the deaths, and reported that one out of four victims of the human rights abuses were women.

Hunger kills in the mountains

One of the most devastating testimonies was given by Juana Morales*, who told the hearing that she and her three children fled into the mountains in 1982 from San Marcos, a community on the border between Izabal and the neighbouring province of Alta Verapaz.

Morales said a group of soldiers came to her home, took away her husband – she still doesn’t know what happened to him – and then raped her.

“They put a gun to my chest and raped me. Three of them did it, the rest just watched. One of my kids, who was four years old at the time, was with me, and screamed when he saw what they were doing to me,” she said.

To save her own and her children’s lives, the Q’eqchi woman went into hiding in the nearby mountains. “We had nothing to eat, we had no tortillas, and my kids started to get sick,” she said.

“My daughter told me we should go back home, saying ‘there are chicken eggs on the table there’,” Morales said between sobs. One by one, her three children starved to death in the mountains.

After living in hiding in the forest for six years, she returned to San Marcos one day, but her home and her belongings were no longer there. “I had two houses, but they had burnt them down. I had nothing left.”

Lucía Morán, with Women Transforming the World, a local non-governmental organisation, told IPS that with this case, “Guatemala is setting a historic legal precedent for humanity, because a national court has never heard cases of rape and sexual slavery.

“Sexual violence has been used as a weapon of war, and it wasn’t until the 1990s, in the international tribunals on Yugoslavia and Rwanda, that justice began to be done in these cases,” she said.

The activist pointed out that between 1982 and 1988 there were no armed clashes between the army and the guerrillas in the so-called Franja Transversal del Norte (northern transversal strip), where these communities were situated. But the army set up the garrison in Sepur Zarco to protect the economic interests of large landowners and the mining and oil industries.

In a 1982-1983 scorched-earth campaign, at least 440 villages were razed to the ground, and the inhabitants killed.

“That’s when they started making lists, to track down peasant leaders who were fighting for legal title to their land,” she said, adding that the husbands of the 15 women who testified at this week’s hearing were all rural activists, and were all forcibly disappeared.

Another of the victims described how she was raped and forced to work as a servant in
Sepur Zarco.

“I was sexually abused by five soldiers every day. I was there for six months, every other day,” said Marta López*, who had to leave her eight children home alone while she worked at the garrison from 8:00 AM to 5:00 PM.

But before that, soldiers had come for her husband. “In 1982, the military came to our house and took him away, killed him, and dumped him in a pit,” she said.

The army’s version of events

As the women testified, former army reserves sergeant Ricardo Méndez Ruiz admitted that “the army committed abuses during the conflict,” but said “the guerrillas did too.”

He argued that “justice should be the same for everyone.”

In 2011, Méndez Ruiz, a businessman, brought legal action against 26 people for his 1982 kidnapping by left-wing guerrilla groups. Today he is a spokesman for the defence of the military personnel accused of civil war-era human rights violations.

“It is clear that the witnesses that the Public Ministry (office of the public prosecutor) is providing and the plaintiffs are people with very low levels of education. They don’t even have any idea of exact dates, which makes you think they may have been manipulated,” he told IPS, referring to the women who testified.

Méndez Ruiz has repeatedly claimed that the work of the prosecutor’s office is “biased” and is being used “to wreak vengeance on the army.”

And in this case, he said, the interest is also “for money.”

“On other opportunities, the Inter-American Court of Human Rights has condemned the Guatemalan state to pay millions in reparations, which I’m sure go into the pockets of the plaintiffs,” he said.

* The names of the victims have been changed for security reasons.