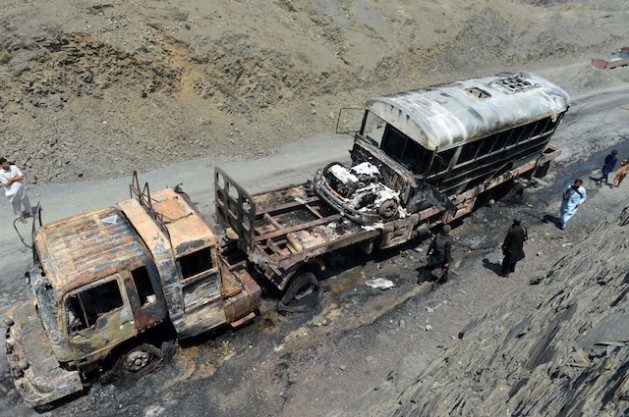 Since 2008, militants in Pakistan have torched over 5,000 vehicles carrying NATO supplies to Afghanistan. Credit: Ashfaq Yusufzai/IPS

PESHAWAR, Pakistan , Jun 18 2013 (IPS) - The United States is laying meticulous plans ahead of its 2014 withdrawal from Afghanistan, but it has clearly overlooked how its continued drones strikes on the tribal areas of neighbouring Pakistan will affect the much-anticipated pullout.

Last week, a group of militants belonging to the Tehreek-e-Taliban Pakistan (TTP) torched three containers stuffed with supplies for NATO troops in Afghanistan, as they trundled along the stony mountain pass known as Torkham Road in Pakistan’s northern Khyber Pakhtunkhwa (KP) province.

The militants claimed the attack on the convoy of 12 containers was payback for the drone strike on May 29 that killed TTP Deputy Leader Waliur Rehman in North Waziristan province, one of seven zones comprising the country’s Federally Administered Tribal Areas (FATA).

The incident last month brought the total number of drone strikes on the region to over 355 since 2005. But while the U.S. government has hitherto been happy to turn a blind eye to various forms of protest against its campaign of remote warfare – from civilian marches, to government statements – the burning of NATO-bound vehicles might signal a turning point in its controversial foreign policy.

Muhammad Mushtaq, an office-bearer of the NATO Suppliers Association – a local collective of drivers, cleaners and vehicle owners involved in the transport of supplies across the border – told IPS, “Since 2008, more than 5,000 NATO vehicles have been burnt down in Peshawar and the Khyber Agency, all of them en route to Afghanistan to replenish the forces engaged in a war against terrorism since 2002.”

In the process, he said, not only have roughly 10 million dollars worth of equipment and supplies been reduced to ashes, but more than 500 people, including drivers and cleaners, have lost their lives.

In December 2008, 160 NATO vehicles carrying Humvees destined for Afghanistan were burnt in a single attack near Peshawar, capital of the KP, Mushtaq said. The militants later paraded triumphantly amid billowing flames that blackened the sky.

Most of the vehicles heading to Afghanistan carry military equipment, food, and other logistical supplies for the roughly 100,000 foreign troops stationed there, Retired Major Anwar Khan, a security analyst, told IPS.

“This same route will also likely be used for the withdrawal of heavy military hardware as well as soldiers,” he said. Thus, if drone strikes continue, the U.S. risks leaving its main access and exit route vulnerable to attacks.

Khan says that the U.S. and its coalition partners in the so-called ‘War on Terror’ must revisit their military strategy if they are determined to stick to the 2014 date. “Otherwise, the chances of their withdrawal and peace in Pakistan and Afghanistan will remain a dream.”

An eye for an eye

When U.S.-led forces toppled the Taliban government in Kabul in 2001, it signaled the beginning of a war that would drag on for over a decade.

Members of the deposed regime, along with their supporters, fled en masse into the mountains that form the rugged 1,200-kilometre-long border between Afghanistan and Pakistan, prompting the latter to throw in its lot with the U.S. in the hopes of preventing the militants from taking root in its own, volatile tribal zones.

But promises to destroy the Al Qaeda network charged with carrying out the bombing of the U.S.’s twin towers on Sep. 11, 2001, have failed to bear fruit, with many commentators observing that the militants are stronger than ever.

Last May, against the backdrop of rising costs, a mounting death toll and loud public opposition to the war, U.S. President Barack Obama signed a Strategic Partnership Agreement with Afghan President Hamid Karzai, agreeing to withdraw forces by 2014 and hand over power to the locally elected government.

But experts like Pervez Jamal, professor of political science at the University of Peshawar, believe this plan will fall flat unless immediate measures are taken to appease the TTP.

As Khan pointed out, “The burning of vehicles has already made the war against terrorism more expensive for the U.S. and its allies.”

Currently, 70 percent of supplies for Western forces in landlocked Afghanistan come through Pakistan, where they arrive by ship at the Arabian Sea port of Karachi before travelling 3,000 kilometres to the Bagram Airfield in Kabul.

In November 2011, the Pakistan government ordered the closure of this supply route when U.S. forces attacked a Pakistani security post in FATA’s Mohmand Agency, killing 24 soldiers.

Deprived of a land route, the U.S. was forced to explore alternative, aerial routes through Russia and the former Soviet republics that border Afghanistan. During this time, the cost of transporting supplies went from 17 million dollars to 104 million dollars.

Unable to sustain these costs, the U.S. government issued an apology for the attack, and the supply route was re-opened in 2012, with the understanding that it would remain functional until 2015, to facilitate a smooth withdrawal from Afghanistan.

But this agreement is now in jeopardy.

The burning of supplies also spells danger for the 10,000 troops tasked with remaining on the ground to assist the 350,000 Afghan National Security Forces with the political transition.

The local security force currently lacks training and military equipment; without the promise of reinforcements, some experts say they will be no match for an attempted power grab by the militants.

Javed Hasham, an Afghan war analyst based in Peshawar, told IPS that the Taliban are capable of destroying convoys very easily. Torkham Road is an exposed mountain pass, with no security outposts along the way. The Taliban, familiar with the terrain, have hideouts in hills and houses that overlook the winding road.

Attacks on supply convoys had recorded a massive decrease over the past four months but have recently picked up again, keeping pace with increased drone strikes.

Hasham believes it unlikely that even the Pakistan government, which is loathe to support the Taliban, will not chastise the militants for these attacks, as it, too, sees the drone strikes as a severe encroachment on national sovereignty.

“The only way forward is for the U.S. to put its drone strikes on hold,” Hasham said.