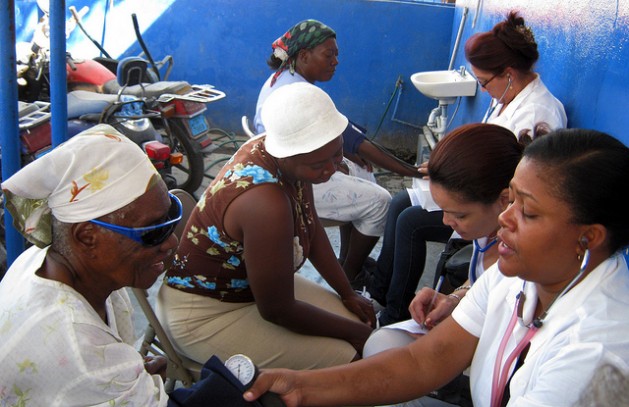 Many Haitian women have their blood pressure taken for the first time at mobile clinics like this one staffed by a Cuban medical brigade in Salomon market in Port-au-Prince. Credit: Patricia Grogg/IPS

PORT-AU-PRINCE, Aug 28 2013 (IPS) - It’s Saturday, and the entrance hall of a police station in front of the busy market in Salomon in the Haitian capital has become an improvised health post. In a few minutes there is a long queue of people waiting to be seen by the Cuban medical brigade.

The police officer on duty said he was not authorised to speak to journalists, but the extent of police cooperation is obvious. The police stations’ tables and chairs are quickly lined up along the entrance hall to facilitate the work of La Renaissance hospital workers, who carry out preventive health work here once a week.

“We are a mobile clinic,” said Damarys Ávila, the head of La Renaissance hospital, which is staffed by the Cuban medical mission. “We check for high blood pressure, cataracts, pterygium (a benign tumour of the conjunctiva) and glaucoma,” she told IPS. “We send people with these conditions to the hospital.”

Women are the majority of those waiting in line. “Women have the highest rate of high blood pressure because they bear the greatest burden of labour. Then there are dietary factors, like eating too much hot, spicy food, refined flour and salt,” she said.

“Many people have their blood pressure taken here for the first time in their lives,” Ávila said.

On a tour of this unusual health post, where in a single morning 167 poor women and men receive attention, expressions of gratitude abound.

“We seek out the Cuban doctors because they treat people well and they don’t charge. We are poor, we cannot afford to pay,” said a resident of Port-au-Prince before she raised the heavy load she was carrying on to her head.

The first Cuban medical brigade to Haiti arrived on Dec. 4, 1998, bringing relief in the aftermath of hurricane Georges. Since then cooperation has been uninterrupted and has had a decisive effect in this impoverished country, which in 2010 suffered an earthquake that killed 316,000 people, according to government figures, along with an ongoing cholera epidemic that has also claimed thousands of lives.

During this period Cuban medical personnel have seen 18 million patients, carried out 300,000 operations, saved 300,000 lives and restored eyesight to 53,000 people. According to official reports, there are 640 Cuban health professionals in Haiti, including 357 women.

The international healthcare aid to Haiti stands out not only due to its scope – it reaches the entire country – and its humanitarian impact, but also because it is preparing the country for the future by putting in place a public health system, including the reconstruction of hospital infrastructure.

Financial contributions towards these efforts come from Cuba, and also from Australia, Germany, Namibia, Norway, South Africa, Venezuela, and to a lesser extent from other countries.

The Cuban programme involves remodelling and building 30 community hospitals to act as reference centres, more than half of which have already been completed. Some 39 Haitian health ministry units are to be fitted out as healthcare centres, with or without beds, as well as 30 comprehensive rehabilitation wards.

There are two ophthalmological missions, part of Operation Miracle, one based permanently in Port-au-Prince and the other touring the interior of the country. There is a laboratory for prosthetic and orthopaedic devices, three electromedical workshops and a network for epidemiological and environmental surveillance.

Operation Miracle got underway in 2004, and by 2011 (the latest figures released) had restored or improved vision for more than two million people in 34 countries of Latin America, the Caribbean and Africa.

John M. Kirk, a professor at Dalhousie University in Canada, said that Haitian doctors who trained in Cuba have a key role to play in creating a stronger health system in Haiti.

According to his figures, 430 of the 625 Haitians who graduated from Cuba’s Latin American School of Medicine (ELAM) in early 2011 are already working in their country. Another 115 Haitians graduated from the University of Santiago de Cuba in 2011.

ELAM was established in November 1999, and was proposed to the 9th Ibero-American Summit, held that year in Havana, as a project for training health personnel in the regional grouping, made up of 19 Latin American countries, Andorra, Spain and Portugal.

But although the initiative was praised, it was not taken up by the high officials present at its inauguration. Cuba went ahead with the programme, which today embraces 122 countries and trains “young people mainly from the poorest strata of society, who are ethnically, educationally and culturally diverse,” its website says.

As a result of the economic reforms initiated in 2010, free provision of Cuban cooperation is being reduced, although it will continue to be “absolutely free” in the Sahrawi Arab Democratic Republic, and Operation Miracle will also be free in Haiti, Honduras, Paraguay and Ecuador, among other countries.

Through the SMC, Brazil has hired 4,000 Cuban doctors to work in poor areas in the north of the country.