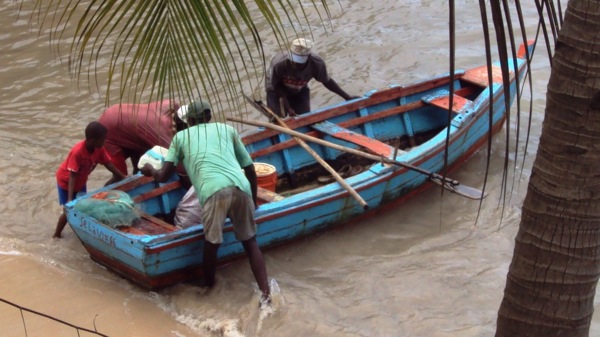 A fishing boat departs from Cyvadier, on the Haitian coast. Credit: Peter Costantini/IPS

SEATTLE. U.S., Jan 13 2013 (IPS) - On a hillside overlooking Port-au-Prince, a muscular Haitian man in a green tank top raises a heavy steel pry bar over his head and brings it down into a hole, shattering a bit of Haiti’s limestone skeleton.

He’s strong, but after several minutes of pounding in the humid heat, rivulets of sweat are pouring off him. He passes me the tool.

Before long, the vye blan (old foreigner) is soaked and sucking wind. A cluster of Haitians cheers him on, and when he’s beat, another takes the bar and begins his shift as a human pile-driver.

We’re in one of Haiti’s biggest tent camps, housing over 50,000 people displaced by the earthquake of Jan. 12, 2010. It was nicknamed Goudou Goudou because it sounded like a diesel engine approaching.

Four months later, I’m volunteering with a team from the non-profit Architecture for Humanity. We’ve agreed to build a wooden platform for a hospital tent that needs to be moved, so we’re digging holes and setting four-by-fours in concrete to support it.
We arrived on the site planning to use five volunteers from the camp. But 32 showed up.

Besides homes, most had lost jobs and family members. They were tired of waiting in the camp and desperate for useful work. We didn’t want to send anyone away, so we tried to figure out how to integrate them into the project.

Within a couple of days, they had largely organised themselves. The few experienced construction workers became foremen. But there were also accountants and university students, a dislocated cross-section of society.

People were jazzed about learning and teaching construction techniques. They took turns cutting four-by-fours with a circular saw, plumbing them in the holes, and pouring concrete.

A couple of weeks later the hospital tent was open. And a group of people stuck in tent-camp limbo had improved their community and learned some skills. Still, it was a tiny candle against a vast darkness.

Goudou Goudou was the worst catastrophe in the history of the Western Hemisphere. It killed an estimated 200,000, proportionately more than World War II deaths in the United Kingdom. It left a million and a half homeless. Clearly, it called for something like a Marshall Plan.

The devastation immediately prompted generous outpourings of much-appreciated assistance from people around the world. Over three years, foreign governments have pledged over 12 billion dollars in aid. But less than half has been disbursed and it’s not clear where much of that has gone.

Over 350,000 people are still stuck in camps, and many who left moved back into condemned structures. Only about 6,000 permanent new dwellings have been built, and 15,000 old ones repaired. A still-simmering cholera epidemic has killed over 7,600.

About a year ago, I went back to Haiti for five months to work as a network engineer for a small non-profit called Inveneo. We built out wireless broadband Internet into areas of the countryside, and installed solar computer labs in schools. Most importantly, we recruited and trained Haitian technicians and small businesses, and turned the network and labs almost entirely over to them.

It was heartening to learn that there is a small but dynamic information technology industry in Haiti, and that a few universities are graduating capable people into it. Their productivity and inventiveness can create multipliers that reach down the economic ladder. Yet most Haitians are still hanging onto the lowest rungs.

Much ink has rightfully been spilled about the failures of large-scale top-down aid. There are no simple recipes for effective cooperation. But a few guidelines for bottom-up solidarity are coming into focus for me.

First, do no harm

The U.S. Marines occupied Haiti from 1915 to 1934 to insure that U.S. bank loans were repaid. Washington supported the Duvalier dictatorship from 1957 to 1986. Since then, it has supported some military regimes and undermined democratic governments.

Official aid, too, has sometimes done more harm than good. Most famously, it destroyed Creole pigs, a hardy native breed, and impoverished many Haitian peasants. These traumas to the body politic take decades to heal, and some of the current aid is still treating them.

Move from charity to partnership

Recently a state-of-the-art public teaching hospital opened in a rural town. Partners in Health, who built it, calls its work “accompaniment”. Over 25 years, the non-profit has trained numerous Haitian doctors and nurses, and sent hundreds of community health organisers back into their villages.

Haiti’s health ministry and public medical school were decimated by the quake. PiH is supporting their recovery and integrating the new hospital with them.

Move from reconstruction to development

Haitians and their friends are again facing challenging questions of how to channel tides of investment so that they lift even rowboats, and how to calculate return on investment for the impoverished majority.

Keep it simple and appropriate

Some newer technologies have also matured. With few areas connected to the unreliable electrical grid, the government has begun pilot solar programmes in the countryside. A small Haitian firm, ENERSA, is manufacturing photovoltaic panels and installing them around the country.

Start with the 90 percent of kids who don’t have public schools, and the more than half of adults who can’t read or write. Free education and universal literacy are indispensable for developing human capital, capturing value added from the economy and expanding democracy.

Stoke the Haitian genius for do-it-yourself and sweat equity, built on deep traditions of lakou (community) and konbit (cooperation).

For at least 40 years, peasant organisations have mobilised hundreds of thousands of members to practice sustainable farming. Now the Papaye Peasant Movement is constructing “eco-villages” to resettle displaced families, in partnership with the Unitarian-Universalist Service Committee.

They are just one branch of a widespread root system of community cooperatives, unions and social enterprises, many operating under the radar of official aid. Many draw on the talents and resources of the Haitian diaspora.

Measure the success of initiatives over a decade or two, in the context of national priorities. Once a road is built, for example, it deteriorates fast. Maintaining it requires heavy equipment and operators, engineers and planning. Ultimately, government must become the funder and coordinator.

This is a good principle, but you quickly find out that a lot of Haitians are already fishing. And it’s tough to make a living.

So help them get better nets. Underwrite bigger boats so they can fish further out. Incubate their formation of processing and cold storage cooperatives. Work with the public sector and businesses to improve transport to the cities to develop markets there. And here’s the key: as soon as possible, slide into the background. Learn from the guts, elbow-grease and creativity of their efforts to build durable economies and communities on that Haitian limestone.

*Peter Costantini has visited Haiti three times since 1995. He has covered Latin America for three decades, while making his living in the technology industries. Before that he was a construction worker and community organiser.