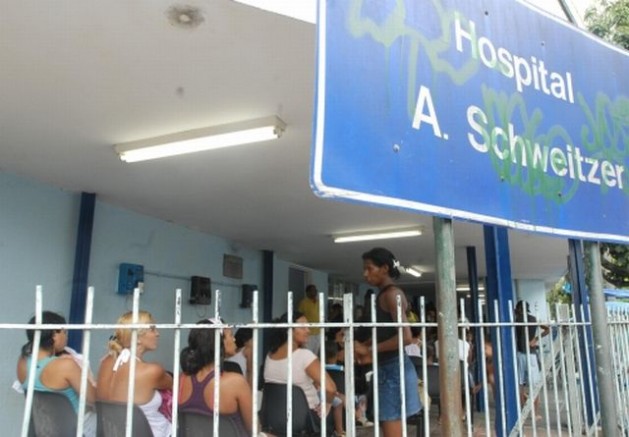 RIO DE JANEIRO, Aug 23 2013 (IPS) - Brazil plans to import doctors to provide healthcare in poor suburbs of large cities, impoverished regions of the interior and border areas. But is there really a shortage of doctors in this country?

Dr. Pedro Henrique Grezele was 24 years old and fresh out of med school when he enlisted in the army in 2010. He chose the Amazon region to put into practice the medical knowledge he had acquired at the University of the State of Rio de Janeiro (UERJ).

He engaged in many missions in the Amazon jungle, boating up and down rivers to provide basic healthcare for hundreds of riverside communities.

“I treated patients on board the boat, with the medicines we had in stock. There was no possibility of doing lab tests, blood counts or X-rays. We treated everything according to instinct, based on the knowledge we acquired at the university,” he told IPS.

In the first half of 2010, Grezele spent several weeks on a mission up the Ipixuna river, in the southwest of Amazonas state in the extreme northwest of the country, close to the state of Acre. There were no municipal or state doctors: all treatment was provided by the army medics.

“That was where I diagnosed my first case of cancer, in a patient in the community of Boca do Puca. But we were on a boat in the middle of the Amazon river, with no chance of providing treatment,” he said.

Boca do Puca is a village of 130 people. The patient had penile cancer. “Fortunately we were able to remove it, after taking the patient to army facilities in Manaus (nearly 1,400 kilometres away). If it had been up to the state or the municipality, he would certainly have died,” he said.

The graphic below shows the ratios of doctors to population in Brazil and other countries:

But it is not necessary to go to the remotest corners of Brazil to meet with deficient healthcare, even in countries where there are doctors to spare.

There, medical student Marcelo T. attends classes at a leading university hospital, where he bears witness to the daily shortages of materials.

“Once we had to cancel an operation because the roof was leaking, when the surgeon, anaesthetist and patient were all ready and waiting. Sometimes we are out of saline solution or other basic materials,” said this student of the Federal University of Rio de Janeiro (UFRJ).

Brazil has fewer doctors per capita than some of its neighbours, but it is not below international standards, and is even ahead of several industrialised countries.

But the authorities say this country of 198 million people is short of 53,000 doctors.

On Jul. 8, President Dilma Rousseff announced the More Doctors (Mais Médicos) programme, designed to remedy the deficit in healthcare by attracting foreign physicians to practise in areas where Brazilian doctors are reluctant to work, either because of their distance from reference hospitals or the lack of infrastructure.

“The Health Ministry is not trying to bring doctors from other countries to compete for jobs with Brazilians,” Health Minister Alexandre Padilha told foreign correspondents.

“This programme will not take a job away from any Brazilian; foreigners will have restricted authorisation to practise basic healthcare only in the outskirts of large cities and in municipalities in the interior, which are the least served areas,” he said.

According to Padilha, available medical personnel is insufficient to meet demand. In the last 10 years, 143,000 vacancies were created for doctors, but only 90,000 were filled.

The first phase of selection for these vacancies was completed in early August. Out of 16,530 medical professionals with Brazilian qualifications, or who validated foreign degrees, and who registered under an earlier call of the Mais Médicos programme, only 938 confirmed they would actually participate, equivalent to six percent of the 15,460 vacancies in the municipalities.

This handful of doctors will be deployed in the neediest areas of 404 municipalities. The remaining vacancies will be filled by physicians from abroad.

But of the country’s 26 states and one federal district, 22 are below the national average and five are in a situation of “severe shortage,” according to the WHO definition of less than one doctor per 1,000 population.

“There are 700 municipalities where there is not a single resident doctor. We have too few doctors, and they are poorly distributed,” Padilha said.

But the idea of bringing in foreign doctors has received a hail of criticism from the medical association, which stresses poor working conditions and facilities as the reason doctors are reluctant to practise in the places where they are most needed.

“This policy is doomed to failure,” Mauro Brito, a member of the Federal Medical Council (CFM), which controls licensing of the nation’s medical professionals, told IPS. “President Dilma was wrongly advised and she made an electorally-motivated announcement. It is a fallacy to say that there are not enough doctors.”

The government’s figures differ from the CFM’s, which says there are two doctors per 1,000 population.

“Increasing numbers will not ensure high quality care for the entire populace. Health professionals must go to the interior, where sometimes the working conditions are deplorable,” Brito said.

Forty percent of total national expenditure on health comes from the federal government and the rest from state and municipal authorities and the private sector.

The CFM is calling for a health budget equivalent to 10 percent of GDP, up from the current four percent.

In the view of the president of the Brazilian Medical Association, Florentino Cardoso, the main problems are shortage of funds, bad management, and corruption that prevents resources being used as intended.

“Some health posts operate out of rented houses, without stretchers to lay patients on for examination, water for hand-washing, or facilities for doing a simple blood count or chest X-ray,” he said.

The worst conditions are found in poor suburbs of Brazil’s cities and in the north and northeast, the least developed parts of the country.

The minimum monthly salary for a doctor is 1,100 dollars.

In an attempt to promote Brazil to foreigners as a work destination, Padilha said the call for registration was aimed both at young graduates and at “experienced professionals who would like to move here and retrain.”

“It will be possible to attract well-trained, well-qualified young people, who are interested in getting to know Brazil,” he said.