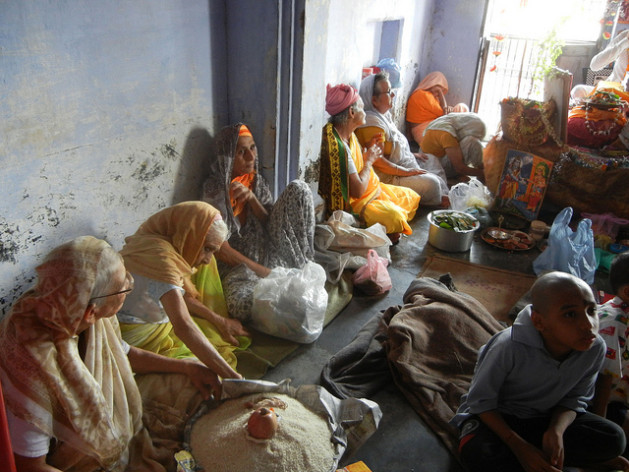 Widows at a shelter in Varanasi in eastern India. Credit: Sudeshna Sarkar/IPS

VARANASI, India , Aug 27 2013 (IPS) - Namuna Gautam was among millions of Indian women who celebrated Rakshabandhan this year, but one thing set her apart. It was the first time the 80-year-old took part in the festival, in which sisters pray for the long life, health and happiness of their brothers.

For decades, Gautam was part of a dark tradition that shunned widowed women as unlucky, and threw them out of home to fend for themselves.

“I didn’t even know what my husband looked or sounded like,” Gautam told IPS as she sat in the gloomy, dank corridor of the widows’ home in Varanasi where she had been sent to die at the age of 14.

“I was married when I was 10. During the wedding, I had to keep the veil over my face or people would have thought me immodest. My husband died the same year and my in-laws said I had brought them bad luck.” Like many others, she was married as a child, but due to join her husband only later.

Gautam, the daughter of a poor farmer who’d never been to school, was sent to look after her mother’s elderly brother and his wife.

“They decided to spend their last days in Varanasi, the holy city where if you die you are released from the cycle of rebirth and pain,” Gautam said. “I came with them and when they died, I lived on alms. Then I cooked and cleaned for people. I am infirm now and can’t work any more.”

Gautam is among the hundreds of Hindu upper caste widows born in times when female education was rare, polygamy flourished, and daughters had no share in family property.

“Bengal (the eastern Indian state) was renowned for its erudition, culture and social reforms. And yet it treated its young widows so appallingly; you can’t reconcile the two,” says social entrepreneur Bindeshwar Pathak.

His organisation Sulabh International known for its sanitation campaign is now adopting abandoned and forgotten old widows to give them back “the dignity and care they never had.”

“The women were married off at a very young age – some were just five or six. Their husbands, who were much older, married several times. When they died, they left dozens of young widows behind.

“These young girls were forced to shave off their hair, dress only in the coarsest white clothes, eat once a day and were barred from all social events as they were considered ill-omened.”

Usha Mishra broke down as she described her struggle for survival after her husband, a small trader, died four years after their marriage. “I was 15 when I was married,” says the 55-year-old, who looks much older. “By 19, I was a widow with a two-year-old daughter.”

The old practice of sati – burning widows alive on their husbands’ pyres – was banned in 1839. But spared a grisly death, most widows led a life of deprivation and humiliation.

The 16th century social reformer Chaitanya brought a group of widows from Bengal to Vrindavan close to Delhi to give them a home. That started a flood of families bringing their widows to the cities of Varanasi and Vrindavan and abandoning them there.

Besides being reduced to a life of abject begging or menial labour, there are also tales of young widows being forced into prostitution. Indo-Canadian film maker Deepa Mehta’s ‘Water’ in 2005 put the plight of the forgotten widows in the limelight.

This was followed by media reports. “The reports caught the attention of the Supreme Court, which asked its legal division, the National Legal Service Authority (NALSA), to look into the matter,” said Pathak.

“In August 2012, we were surprised to receive a letter from NALSA, saying there were around 1,700 such destitute widows. It asked whether Sulabh and ISKCON (the International Society for Krishna Consciousness, a religious organisation), could provide two meals a day for these women.

“Though it was not Sulabh’s area of expertise, we still went to Vrindavan to meet them. What we saw was heart-breaking.”

While most of the women are in their seventies, a few are in their eighties and nineties. The Uttar Pradesh state government had offered them 500 rupees (eight dollars) per month after their plight became known. But three years ago the money stopped.

“In Vrindavan, they then survived on ten rupees (15 cents) a day, money paid to them by the temple authorities if they attended the morning and evening prayer sessions,” Vinita Varma, who heads the widows initiative at Sulabh, told IPS.

“The younger ones augmented it a bit by making lamp wicks and stitching tiny garments for idols. But the older ones, who could not work any longer, had no option other than begging.”

Sulabh has adopted 1,000 widows in Vrindavan and Varanasi, providing them monthly support of 2,000 rupees (32 dollars) each, basic medical care and education.
Now it is trying to unite them with the community that had deserted them.

Last year, the white saris of the widows in Vrindavan turned a miraculous pink and green as they played Holi, the festival of colours, once prohibited for them.

This year, the Varanasi widows celebrated Rakshabandhan, and in October, some will return to Bengal after decades to watch Durga Puja, their biggest annual festival.

Pathak is lobbying for a law to ensure that widows receive basic education and vocational training. “Once they become breadwinners, their families will regard them with new respect.”