In the face of an intense wave of consumerism, some people in Argentina are beginning to discover the advantages of sharing goods and services, instead of buying them. 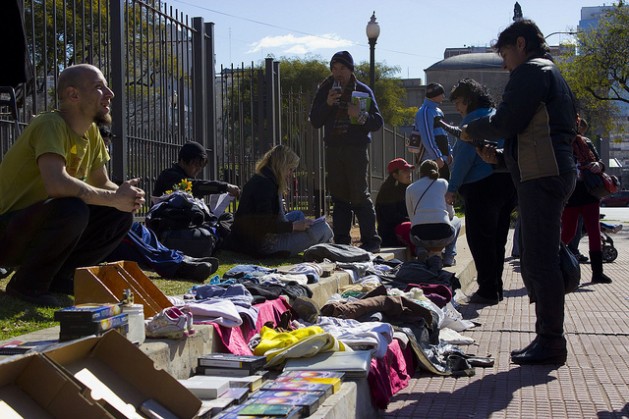 Nothing is for sale at this street market in Plaza Italia, in the Palermo district of Buenos Aires. Credit: Juan Moseinco/IPS

BUENOS AIRES, Sep 8 2013 (IPS) - Disillusioned with an economy that promotes individualism and ruthless consumption, thousands of people in Argentina are giving things away in street markets, organising car pools with strangers or offering free accommodation to travellers from abroad.

These are early trends in this South American country, but they are expanding, based on Web 2.0 platforms. Users share a concern for the environment and a rejection of consumerism. But they also have a desire to strengthen a sense of community and trust.

Launched in 2010, the first market was in Rodríguez’s home, in the Buenos Aires district of Liniers. Rodríguez offered friends and neighbours books, CDs, clothes, furniture and other goods that he had accumulated and didn’t need. He offered food and beverages as well.

In time, people began to follow his lead. He recalls that the 13th market “went out on the street and exploded” with dissemination on social networks. “This breaks with traditional mindsets,” Rodríguez said. Visitors are initially incredulous, in doubt about whether or not they can really take things without leaving something else in exchange.

People can come to a gratiferia with the stuff they wish to get rid of, and they do not have to worry about whether someone will take it. The idea is that someone will be interested in extending items’ useful life, instead of buying new goods.

“It’s a reorganisation of material objects that also generates an interesting kind of socialisation, by creating a sense of community,” Rodríguez said.

Gratiferias have spread to cities in some of the provinces, as well as to Chile, Mexico and other countries, he said.

This free give-and-take, according to Rodríguez, did not arise during a situation of crisis, like the bartering systems that were so popular during the 2001-2002 economic and social meltdown. “This is an attempt to respond to a much longer crisis in our relationship with material goods,” he said.

The practice has caught on in other areas. At the University of Buenos Aires engineering department, a group of students is offering lecture notes and study materials at a free fair this month.

“The idea is in the spirit of the gratiferias, and it should be a wider movement involving other departments, but for the moment we are trying to establish it in engineering,” Santiago Trejo, one of the students organising the fair, told Tierramérica*.

These are original forms of “collaborative consumption”, an expression coined in the United States to describe mechanisms for sharing or exchanging electrical appliances, books, clothes, shoes, instruments, furniture, bicycles and even cars.

In 2011, Time magazine named collaborative consumption one of the 10 ideas capable of changing the world.

Similar ideas have emerged among people who regard travel as not just going to another part of the world, but having a human and social experience with people who live in a different country.

“When I went to Europe I stayed at hostels, and when I came home I realised I hadn’t much idea of how people lived in those countries, or what they thought of ours,” 24-year-old Aranzazú Dobantón, who is working and studying film, told Tierramérica.

Four years ago, she uploaded her profile on Couchsurfing, an international platform that puts people willing to host foreign visitors in touch with would-be travellers. The exchange involves no money: just sharing a roof, and the experience.

The local group has 5,000 registered users.

“So far I have hosted about 15 people from different parts of the world, many of them from Denmark, and also from Mexico, the Philippines, France, and a Turkish person who lived in Germany,” Dobantón said.

As the hostess, she sets the conditions. She and the potential guest correspond by e-mail, and once the visitor is in Buenos Aires they meet first in a public place.

“The visitors are very willing. Sometimes I cook for them, sometimes they prepare the food. They realise it’s not easy to look after guests when I’m working. But they are ordinary people, with the same concerns that I have, although the reality of where they live is different,” she said.

The visitors later write on the website about how they felt staying at her home, and these comments encourage other people to make the same trip – or not. Dobantón, in turn, can use the network to stay at someone’s home when she wants to travel. So far she has only tried out the system in neighbouring Uruguay.

Collaborative consumption is growing so big in the United States that the brokerage and financial services firm ConvergEx wrote an article claiming it could have “catastrophic” ripple effects on the economy.

Carpooling has grown the most in Argentina. With the aim of saving money and cutting down on pollution and traffic congestion, a number of platforms exist to connect people willing to share a car, the journey and the expenses.

“Vayamos juntos” and “En Camello” are two of the Argentine networks where interested parties publish their offer or requirements for point-to-point journeys. Some just want to share rides from home to work, while others wish to travel from one province to another, or go to a concert or football match.

In other countries, like Mexico, there are different forms of shared transport, such as multi-user cars which provide access to a vehicle when needed for an hourly rate, or a monthly or annual subscription. As with public bicycles, cars are picked up in one parking lot and left in another.

In Argentina, each of the options already has thousands of registered users.