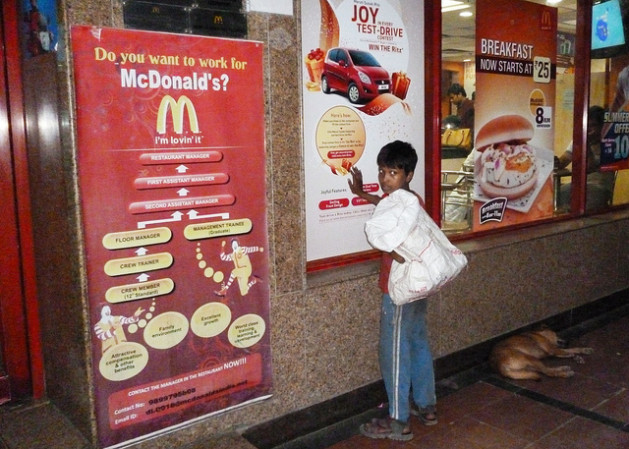 NEW DELHI, Oct 4 2013 (IPS) - As India grapples with rising prices and a rapidly sinking rupee, attention has turned to the country’s massive parallel economy that siphons wealth away from development programmes and into the pockets of a corrupt ruling elite.

On Monday, a special court declared Lalu Prasad Yadav, one of India’s leading politicians, guilty of diverting millions of dollars meant for the purchase of animal fodder while he was chief minister of the eastern state of Bihar in the 1990s.

He has been sentenced to five years in prison. Because he was given more than two years, he will lose the seat he currently holds in Parliament and will be barred from contesting elections, according to a Supreme Court ruling handed down in July, which the government has sought to overturn through an ordinance.

Last week, however, Rahul Gandhi, a scion of the Nehru-Gandhi political dynasty who is tipped to be prime minister if the ruling Congress party is returned to power in elections due next year, announced personal opposition to the ordinance, sealing Yadav’s political fate and that of other legislators convicted for corruption.

Analysts see Gandhi’s opposition to his own party’s policy as a response to rising public anger against corruption. His father Rajiv Gandhi, who served as prime minister from 1984 to 1989, had also been critical of “power brokers” in the Congress party who siphon off development funds.

“Asking political parties to fight corruption is like asking the fox to guard the chicken coop,” Sharma tells IPS.

With black money now an entrenched feature of life in India, Sharma says it has become important to assess the real costs it imposes on the body politic. “We already know that a large parallel economy makes it impossible for economists to make accurate analyses and make policies and programmes that have a chance of working.”

Worse, Sharma said, black money is regularly transferred out of the country through clandestine ‘hawala’ channels, and even if it returns to the country it only goes into lavish lifestyles for a privileged few rather than development activity or projects that can alleviate poverty.

Sharma said the fact that the value of the rupee has slid down by 20 percent over the last four months and is now close to 70 to the dollar is partly the result of increased capital flight via hawala channels, typical in months leading up to an Indian election.

The parallel economy works through an extra-governmental system backed by a phalanx of musclemen, brokers and touts acting in collusion with chartered accountants, policemen and bureaucrats who get a share, said Sharma. “Corruption feeds on itself through the constant generation of black money.”

Having a disposable income in India is determined by whether a significant portion of it is in the form of black money gained through opportunities to participate in the parallel economy.

R. Vaidyanathan, professor of finance and control at the prestigious Indian Institute of Management in the southern city of Bangalore, released a three-year study in 2012 that found Indians paying as much as 70 billion dollars annually in bribes for ordinary governmental services.

Vaidyanathan tells IPS that such bribes work as a form of parallel tax that does not reach government coffers. “This system of ‘bribe tax’ is so well developed that the actual collection is outsourced to private agents.”

According to Vaidyanathan, successive governments have balked at widening the income-tax base beyond three percent of the population because of the existence of the bribe tax system. “Obviously, you cannot ask people to pay two sets of taxes – one for the formal system and the other that feeds the black economy.”

Records released by the finance ministry show that in fiscal year 2011-2012 only 30 million people in this country of 1.2 billion people paid annual income tax, with 90 percent of that number paying less than 7,000 dollars each.

A political manifestation of people’s resistance to corruption is the emergence of the Aam Aadmi Party (AAP) or Ordinary People’s Party led by Arvind Kejriwal, a former income tax official who has vowed to clean up the system and is fighting the next elections with the broom as a polling symbol.

Kejriwal is best known for his efforts to bring transparency into governance that resulted in the passage of the Right to Information Act of 2005. But political parties have been fighting to have the Act amended to ensure that they do not come under its purview.

“It is a travesty that political parties are resisting accountability when they should have been supporting it,” said Sharma. “This shows how entrenched the main political parties have become in the parallel economy.”

According to Joginder Singh, a former director of the Central Bureau of Investigation, an arm of the police department, the poor are the worst victims of corruption since they must pay bribes out of their pockets each time they deal with government departments.

“Corruption is what keeps a majority of Indians in poverty despite the fact that they live in a country that is well-endowed with natural and human resources,” says Singh, who identifies himself with anti-corruption initiatives. “It is an open secret that most public projects have a built-in scope for corruption.”

In 2010, the Washington-based Global Financial Integrity estimated money lost to India through illicit outward flows to be around 462 billion dollars with 68 percent of it happening after 1991 when the country embarked on economic reforms.

Sharma says it is vital to assess the current size of the parallel economy in India. “The last study conducted by the National Institute of Public Finance and Policy was in 1984 when black money was estimated to be around 20 percent of GDP, but most experts agree that it has now grown to around 50 percent of GDP.”