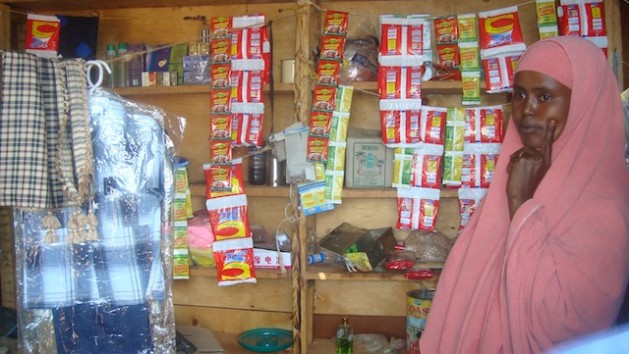 “There is a growing number of Kenyan Somalis who are sympathisers of Al-Shabaab and they are setting up their own small militia groups to send a message to the [Kenyan] national government,” Elwak Abdi, an expert on peace and security from Liboi, a border town in Kenya’s North Eastern Province some 18 km from the Somali border, told IPS.

He added that “a significant number of the Somali community is armed.”

“In areas such as Wajir, Isiolo and Mandera [counties in North Eastern Province] there is constant armed conflict. This is forcing residents to move from one place to another due to the fear of the unknown. Even worse is the [fact that] small militia groups have to be paid to provide protection,” Abdi said.

There has been an ongoing dispute between the two East African nations over their border since 2011 when the Kenya Defence Forces (KDF) waged a military offence against Al-Shabaab in southern Somalia. The KDF took control of certain southern Somali regions as well as some Kenyan regions including Ijara, Garissa and Liboi.

In 2012, tensions between the neighbours escalated as gas and oil deposits were discovered offshore. Both countries claim ownership of waters where the deposits have been discovered.

As Kenya recovers from the Sep. 21 attack on the Westgate Shopping Mall in Nairobi by the Somali Islamist militant group Al-Shabaab, suspicions towards the Somali community in North Eastern Province are growing. Many were afraid to speak to IPS for fear that the Kenyan government is illegally tapping their mobile phones.

Ibrahim Ahmed, executive director of the Kenya Somali Consortium that seeks to address conflict arising from the disputed border, said that all was not well in the expansive arid North Eastern Province. He said that the Kenyan government had done little to “make people aware that not all Somalis are terrorists. This may compromise the fight against terror.”

Because of the largely porous 700-km Kenya-Somali border, the number of Somalis entering into Kenya is growing by the day. Government statistics show that at least 630,000 Somalis live in Kenya. The increased migration has also brought with it an apparent increase in arms smuggling.

Residents in the North Eastern Province claim that some groups of Somalis are bringing arms easily into the country. Kenya’s ministry of internal security estimates that up to 680,000 illegal firearms are in the hands of civilians nationwide. However, there are no exact figures about arms smuggled across the Kenya-Somali border.

The easy availability of small arms has increased inter-clan tensions and violent conflict among the Kenyan Somalis in North Eastern Province and compromised national security. Abdi said “even the World Food Programme is unable to travel to places such as Wajir [in North Eastern Province] to offer humanitarian assistance for fear of abduction and death.”

However, he added that the “increase of small arms and light weapons across the country should not be attributed to the porous Kenya-Somalia border alone, and not just Somalis are involved.

“I am involved in disarmament in northern Kenya and am aware that most weapon smugglers are foreigners, particularly Russians and Ukrainians. Ships dock in Somalia with arms where they are also stored to be transported across East Africa.

“Why is it that no one is talking about the border issues along Kenya and Ethiopia, Sudan and even Uganda, which are also conduits for dangerous weapons coming all the way from abroad through Somalia?” Ahmed asked.

Since the attack on the Westgate Shopping Mall there have been calls to send Somali refugees back to Somalia. But Hussein Ali, a resident of Garissa town, told IPS that this “is enlarging the rift between Kenyan Somalis and the government.”

“How can the government tell Kenyan Somalis that we are one, and solicit their help to fight Al-Shabaab when they still haven’t provided them with the same privileges that other Kenyans enjoy?” said Ali, referring to the Somalis living in the disputed border area in Kenya’s North Eastern Province and the lack of investment in the region.

“Kenyan Somalis will always identify themselves more with their Somalia counterparts and ought to be given the autonomy that the Somalis in Ethiopia enjoy,” Ahmed said.