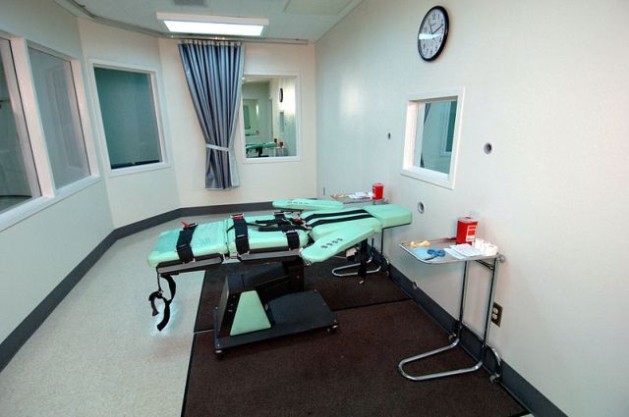 WASHINGTON, Oct 9 2013 (IPS) - Authorities in the southern state of Texas are refusing to return lethal injection drugs purchased from two compounding pharmacies, despite calls from the firms not to use their substances for executions.

The move comes after foreign drug companies have largely stopped exporting drugs for lethal injections to the United States, forcing those U.S. states that still impose death penalties to look to domestic compounding pharmacies to supply them with the required drugs.

According to the U.S. Food and Drug Administration (FDA), pharmacy compounding is a practice in which a licensed pharmacist combines, mixes, or alters a drug’s ingredients to create a medication specifically tailored to the needs of an individual patient.

The Texas Department of Criminal Justice’s (DCJ) refusal has to do with the drug pentobarbital, a substance usually administered as an animal anaesthetic and as a remedy for epilepsy and seizures in humans. The move comes only a few days after one of the two companies involved, Woodlands Compounding Pharmacy (WCP), had expressly requested that the drugs be returned.

“The drugs were purchased legally and we were upfront with the vendors that their names would be subject to public disclosures after the purchase,” Texas DCJ’s spokesman Jason Clark told IPS. “We are not going to return the drugs.”

Clark declined to offer any additional comments, as the issue is currently at the centre of litigation in Texas.

Calls by IPS to WCP for comment were not returned by deadline. However, in an Oct. 4 letter, the owner and pharmacist-in-charge of WCP demanded that the DCJ “immediately return the vials of compounded pentobarbital in exchange for a refund”. According to the company, the sale, which saw WCP providing the State of Texas with eight doses of pentobarbital, took place because Texas had misrepresented the facts.

“Based on the phone calls I had with [the Texas] DCJ, it was my belief that this information would be kept on the ‘down low’ and that it was unlikely that it would be discovered that my pharmacy provided these drugs,” WCP’s Jasper Lovoi wrote. “Now that the information has been made public, I find myself in the middle of a firestorm that I was not advised of and did not bargain for.”

The letter is now being used as evidence in a lawsuit that was filed last week in Texas, challenging the execution of three prisoners on death row.

The other company involved in the controversy, Pharmacy Innovation, has also denied any knowledge of the drugs’ purpose. The company said that it was “completely unaware that the drugs … were purchased with the intent to use them for lethal injections,” according to a new report by the U.K.-based Reprieve, an advocacy group.

As soon as it was informed, the company reportedly cancelled the order before it could be filled.

“In fact, they represent a miniscule and infinitesimal part of the drugs produced by compounding pharmacies,” he said.

Ball declined to comment on the controversy between the Texas DCJ and Woodlands Compounding Pharmacy.

U.S. states turned to compounding pharmacies for drugs for lethal injections only as recently as 2011. That was necessary after drug companies stopped selling sodium thiopental (ST), the substance previously used for executions in the United States.

These drug companies, most based outside the United States, reported facing legal obstacles because of the unconstitutionality of death penalty in their home countries.

The Italy-based Hospira, for instance, announced in 2011 that it would stop producing the drug altogether. The British government, too, banned the export of ST.

That same year, the Denmark-based Lundbeck announced that it would “deny distribution of [pentobarbital] to prisons in U.S. states currently active in carrying out the death penalty by lethal injection.”

So far, the domestic compounding industry has offered a viable alternative to U.S. states still carrying out the death penalty. Texas, Pennsylvania, Colorado and South Dakota, for instance, currently rely on compounding pharmacies for their supply of pentobarbital.

But the recent developments in Texas suggest that this trend may be short-lived.

Nonetheless, the industry’s involvement with the production of pentobarbital has clearly become a point of significant concern for the compounding sector.

Meanwhile, the State of Texas is proceeding with the Wednesday night execution of Michael Yowell, a plaintiff in the Texas litigation, for the murder of his parents in 1998.