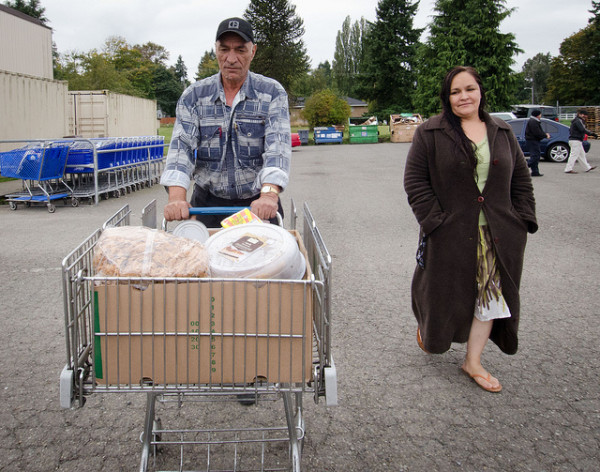 WASHINGTON, Nov 1 2013 (IPS) - U.S. state legislators and corporate lobbies have engaged in an unprecedented attack on minimum wages that has lowered U.S. labour standards, according to new research released Thursday.

The report by the Economic Policy Institute (EPI), a think tank here, is the first of its kind, providing a comprehensive overview of all legislation enacted over the past two years across all 50 U.S. states.

“This is a remarkable indictment of how the economy is not working for everybody.” -- Ross Eisenbrey of EPI

According to EPI researchers, some of the country’s largest corporate lobbies have engaged in an intense attack on U.S. labour standards and workplace protections, including minimum wage laws, the amount of paid sick leave offered, and even child labour protections.

“What is particularly important about this new report is that it emphasises the recent legislative developments at the state and local levels, which unfortunately have been largely ignored,” Jon Schmitt, a senior economist at the Centre for Economic and Policy Research (CEPR), an economic research institute here, told IPS.

“That means that the discussion of economic and political inequality also needs to move to the local level,” he said.

“What is clear from the report is that attacks on labour unions are part of a larger attempt by trade associations and corporate lobbies … to fundamentally change the labour situation in America,” Gordon Lafer, an EPI research associate and an associate professor at the University of Oregon, said at the report’s launch here on Thursday.

Despite the country’s general economic growth, EPI notes that more and more people in the United States are struggling to earn a living wage.

“According to our statistics, from 1983 to 2010 the bottom 60 percent of Americans actually lost wealth, despite the fact that the overall U.S. economy has grown over this same time period,” Ross Eisenbrey, the EPI’s vice-president, said Thursday. “This is a remarkable indictment of how the economy is not working for everybody.”

Although most attacks on labour standards come through state legislatures, the report notes that the momentum behind this large legislative movement has been driven primarily by powerful national corporate lobbies “that aim to lower wages and labour standards across the country.”

Indeed, one of the striking features of the report is the way it sets the local data into the larger national context.

Today, one out of five U.S. citizens is getting paid less than the federally mandated minimum wage. According to recent polls, workers in the U.S. are also increasingly dissatisfied with their current standards of living.

As many as seven in every 10 are saying that the economy is getting worse, and average confidence in the economy has reached its lowest point since November 2011, according to recent polls by Gallup.

On top of that, several U.S. states have already acted in one way or another by taking measures aimed at cutting minimum wage laws, considered some of the last bastions of low-wage worker protections in the country.

In 2011, for instance, New Hampshire legislators repealed the state’s minimum wage, mandating that only the federal minimum wage should be heeded. South Dakota recently abrogated the minimum wage for much of its summer tourism industry.

And while federal minimum wage standards are still in place, these recent trends suggest that the corporate influence at the state level is growing steadily.

While minimum wage restrictions are starting to take their toll on the average worker, the report also notes that many workers are not even able to recover those wages they have actually earned. Their failure to get paid – or what the report calls “wage theft” – refers to those widespread instances in which workers see parts of their paycheques being illegally withheld by their employers.

According to a 2009 survey by the National Employment Law Project, a labour advocacy group, as many as 64 percent of low-wage workers in the United States have seen portions of their paycheques stolen by their employers.

“The problem with alarming issues such as wage theft is that it’s actually very difficult to provide accurate evidence,” the CEPR’s Schmitt says. “Employers say that they’re eventually going to give that money back, but there’s no way of actually monitoring that.”

And as workers struggle to obtain those wages legitimately owed to them, national labour regulations seem to be increasingly tilting to the advantage of employers.

Some states have tackled the growing problem of wage theft by requiring employers to keep detailed pay records, or by passing legislation that enables state authorities to inspect these records. But according to the EPI, business lobbies have worked hard to block the enforcement of these efforts, in some cases by challenging the constitutionality itself of wage-theft laws.

In 2010, Florida’s Miami-Dade County enacted the first wage-theft law in the country. Lacking a department of labour since 2002, the state charged its Department of Small Business Administration with the law’s enforcement.

During its first year, the new law enabled the collection of nearly two million dollars’ worth of illegally withheld pay.

But as other counties sought to follow suit with their own wage-theft laws, business lobbies engaged in extensive legal battles aimed at curbing such laws. In 2011, Palm Beach County, another Florida county, tried to enact a wage-theft law similar to Miami-Dade’s, but business lobbies successfully blocked it by arguing that it would only add a costly new bureaucracy.

“The very little enforcement of wage-theft allegations has only contributed to emboldening employers across the country,” Schmitt says. “Right now, they feel they can take more risks and take advantage of their employees, without fear of retaliation.”