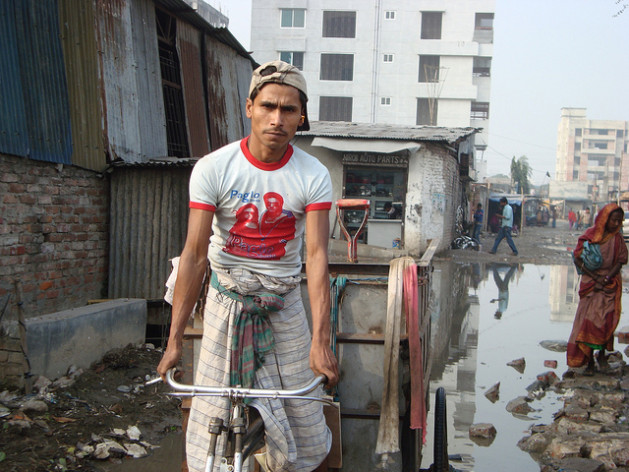 A lack of education and training condemn many street children in Bangladesh (and many other countries) to a life of poverty. Few are able to escape the cycle of low wages for unskilled work. Credit: Naimul Haq/IPS

UNITED NATIONS, Oct 16 2013 (IPS) - With the richest one percent of the population now owning 40 percent of global assets, and the bottom half sharing just one percent, inequality is fast being recognised as a stubborn underlying obstacle to development.

In recent decades, despite steady economic growth, inequality has risen in most countries and in nearly every region of the world. It takes various forms, from income gaps to unequal political access. And it originates in a variety of factors, such as gender, ethnicity, disability, legal status, caste, skin colour, language and economic status.

Yoke Ling Chee of the Penang-based Third World Network (TWN) told IPS that the problem is worsening not only within the richest industrialised countries that are members of the Organisation for Economic Cooperation and Development (OECD), but also some developing countries with rapid economic growth.

Continuing structural inequities and flaws in the global trade and financial systems are a major cause, she said.

“The highly inadequate regulatory [and] policy responses to the last rounds of financial crises means that systemic weaknesses continue which make countries vulnerable to more financial instability,” she said.

Chee also said developing countries that have put in place financial reforms but are export-dependent found themselves equally vulnerable in the 2008 crisis and workers in export sectors suffered as a result.

According to a statement in May by a group of 17 U.N. human rights experts, inequality often triggers social problems that further marginalise groups already left behind and neglected, while unequal access to wealth allows runaway resource use by the wealthy, leading to environmental degradation and climate change, whose impacts fall disproportionately on the most vulnerable.

The group of U.N. experts pointed out that the rise in inequality has severely undermined the hard-won achievements of the Millennium Development Goals (MDGs). It called for a post-2015 economic agenda that will include both a stand-alone and cross-cutting goals to eliminate inequalities.

An Open Working Group (OPW) of U.N. member states is scheduled to meet May 22-24, 2014 to discuss the contours of the proposed new set of Sustainable Development Goals (SDGS) which will succeed the current MDGs, whose target date is 2015.

The experts say making equality a cross‑cutting priority would mean every new goal will confront head-on the systemic injustices that drive inequalities – from institutional discrimination against minority groups to uneven investments in social services in different regions of a country.

They singled out social protection as “an indispensable part of the policy toolkit for tackling inequalities, to ensure that the post‑2015 agenda leaves no group, community or region behind.”

As many as 80 percent of families today have no access to social protection, despite clear evidence that social protection systems can contribute significantly to reducing poverty, creating social cohesion, realising human rights and protecting people from shocks such as food price spikes, the experts say.

They also say the post‑2015 agenda should be linked to the International Labour Organisation’s (ILO) recommendation on social protection floors, which will help create a funding mechanism for developing countries.

The group includes Verene Sheperd, Working Group of Experts on People of African Descent; Alfred de Zayas, independent expert on the promotion of a democratic and equitable international order; Magdalena Sepulveda, Special Rapporteur on extreme poverty and human rights; and Olivier De Schutter, Special Rapporteur on the right to food.

In an op-ed in the New York Times early this week, Joseph Stiglitz, the 2001 Nobel Prize winning economist, said it is well-known by now that income and wealth inequality in most rich countries, especially the United States, have soared in recent decades and, tragically, worsened even more since the Great Recession.

But what about the rest of the world? he asked. Is the gap between countries narrowing, as rising economic powers like China and India have lifted hundreds of millions of people from poverty? And within poor and middle-income countries, is inequality getting worse or better?

Roberto Bissio, director of Social Watch, told IPS the World Bank has also claimed that Goal One of the MDGs – reducing by half the proportion of people in extreme poverty – was met in 2010, five years in advance of the 2015 deadline. Yet that optimistic statistical conclusion in fact hides much more complex realities, he said.

Over the same period, the world’s average inhabitant more than doubled his or her income: from 4,080 dollars a year in 1990 to 9,120 dollars in 2010. Yet that growth in trade and wealth is not reflected with a similar momentum in the evolution of social indicators.

TWN’s Chee told IPS a significant degree of investment profits and value‑added continue to be taken out of developing countries. Those countries that are food commodities exporters now face speculation as an added vulnerability.

Countries that depend on mining controlled by transnational corporations (TNCs) are characterised by environmental destruction, social problems and regressive tax structures for those industries.

“All these contribute to inequalities,” she argued.

“The austerity policies that many European governments now impose on their society that impact on the lower income, even the middle income, are a repeat of what developing countries have been suffering under conditionalities imposed by the International Monetary Fund (IMF) for decades,” Chee said.