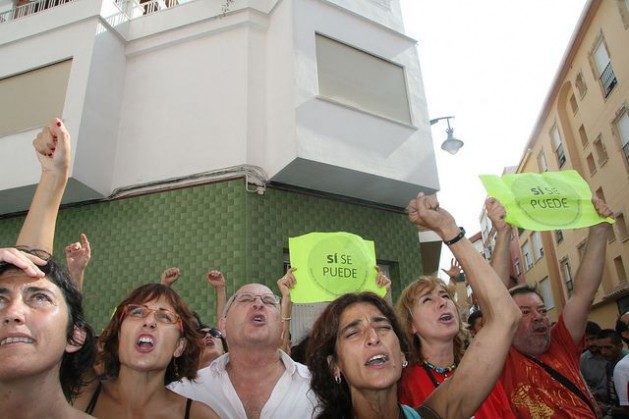 MÁLAGA, Spain , Oct 4 2013 (IPS) - A police cordon kept everyone out of the Buenaventura “corrala” on Thursday after the police evicted 13 families living in the occupied building in the centre of this southern Spanish city early in the morning.

“Tonight we’ll sleep at a friend’s house. I don’t have any work or money. We have to start over again from scratch, and it’s really complicated,” Catalina González, 39, told IPS, crying.

The families, who have been living here since February, unable to afford other housing, have a total of 12 children between them.

The corralas are communities of squatters that have emerged in crisis-stricken Spain in the last few years, as foreclosures and evictions have skyrocketed due to the housing and mortgage crisis.

A total of 362,776 people in Spain lost their homes because of mortgage arrears and foreclosures between 2008 and 2012. -- Platform for Mortgage Victims

The term corrala refers to the galleried tenement buildings with common courtyards and shared services that proliferated in working-class neighbourhoods in Spain’s cities in the 16th to 19th centuries, and has been adopted to stress the sense of community in the occupied buildings.

González, who comes from Barcelona in the northeast, sought shelter in one of the apartments in Buenaventura, a four-storey block of flats, two months ago. She had just arrived from Italy, fleeing her husband who she said mistreated her sons, four-year-old Leónidas and three-year-old Manuel.

The children were playing, sitting on the ground with their two dogs, near a police van while several officers tried to reach, with the help of fire fighters, three activists who were resisting the eviction order and protesting from their perch on the rooftop of the building.

Dozens of people who have been evicted, members of social movements like Stop Desahucios (Stop Evictions), the 15M “indignados” movement, and squatters from other corralas in Málaga gathered for several hours in the street under intermittent rainfall, chanting slogans like “people without a home, homes without people, how can this be?” or “another eviction, another occupation”, until the authorities arrested several activists and left.

The Buenaventura building belonged to the Bankinter bank, which acquired it after the construction company went under and sold it – complete with families living in some of the apartments – to Gestiones Hospedalia, a real estate company.

There are some 3.5 million vacant housing units in this country of 47 million people, equivalent to 14 percent of the housing stock, and 700,000 of them are in the southern region of Andalusia, according to the National Institute of Statistics (INE).

Although most of the people who were occupying the Buenaventura apartments have found a place to stay for the time being, “some families have nowhere to go,” José Cosín, a local lawyer, told IPS.

Cósín is an activist with the Platform for Mortgage Victims (PAH), which helps block evictions and foreclosures and repairs empty buildings to provide housing for people in need, while trying to negotiate social rents.

Montse, who has an 11-year-old daughter and preferred not to give her last name, told IPS that she was going to live in a trailer.

Andrés Clemente said he would ask a friend if he could stay in his garage again.

Carolina, who also wanted to remain anonymous, and her children will stay for now at a friend’s place in the La Suerte corrala – another occupied building.

Since the start of the economic crisis in 2007, the number of occupied buildings has soared. Many of the buildings are brand-new, and owned by banks or real estate companies.

The squatters in Buenaventura held months-long talks with the local and regional authorities, the bank and the company that owns the building.

“But in the end we got nowhere. They’ve been fooling around with us, and merely referred us to the social services,” said Leticia Gómez, 32, who was living in the corrala because she “had nowhere to go” after breaking up with her partner.

The Málaga city government gave each family evicted from the corrala an average of 1,000 euros (1,362 dollars) to cover the cost of rent for the first few months. But those who received the payment say it is not enough help, and are asking for the empty units to be converted into affordable housing, where each family pays according to their income.

“They gave me 900 euros (1,226 dollars) for three months rent. And after that what am I supposed to do? We’ll be back on the streets again,” said Yuli Fajardo, 42, hugging her cinnamon-coloured dog.

José Manuel, standing next to her, said he would occupy an apartment in another empty building. He described how early that morning, the police broke through a human chain that had formed around the corrala to prevent the eviction operation.

Finding a place to rent is not easy for these people, who often have no guarantor to sign for them and no formal job, and who can’t afford to put down a deposit of several months’ rent.

Some of the people who were evicted complained that the police used excessive force and “tore the doors off.”

The police, however, told IPS that the operation “went normally.”

“Even the heavens are crying for us,” Kira Vela, 37, exclaimed when she heard thunder.

Vela ended up in Buenaventura after she lost her home in the Málaga neighbourhood of Ciudad Jardín because she got behind on her mortgage payments. One of her three children, Yolanda, was also living in the corrala with her one-year-old baby.

A total of 362,776 people in Spain lost their homes because of mortgage arrears and foreclosures between 2008 and 2012, according to a report by PAH.

So far, the organisation has managed to block 757 evictions and has rehoused 712 people.

Soaring unemployment, which stands at over 26 percent in Spain – the highest rate in Europe after Greece – has led many families to lose their homes when they are unable to meet rent or mortgage payments. Dozens of people have committed suicide because of the evictions.

“There are many empty homes,” Carmen Gil, who lives near Buenaventura, commented to IPS while watching the protesters shout at a dozen police officers posted at the entry to the building. “They should give them to these families with kids. It’s not a crisis, it’s a scam.”

A number of the people evicted from the building have been out of work for years. Many of them used to work in the construction industry.

“If I could afford to pay rent, I would,” Clemente, a carpenter, told IPS.

In April, the government of the autonomous region of Andalusía, where Málaga is located, approved a decree-law on the social function of housing, establishing the need for a stock of social housing units.

“Why do we have to leave?” eight-year-old José asked his mother Silvia, who was holding him and his six-year-old sister Esther by the hand during a protest demanding “the right to a roof over our heads” the day before the eviction.

In May, the legislators of the governing right-wing People’s Party (PP) passed a law containing measures to strengthen protection for mortgage-holders, make more affordable housing available, and require banks to renegotiate mortgages.

The law was originally based on two bills: one presented by the executive branch, and the other by PAH, which collected 1.5 million signatures and presented a “popular legislative initiative” to Congress.

But the PAH proposals were eliminated from the final version of the bill.