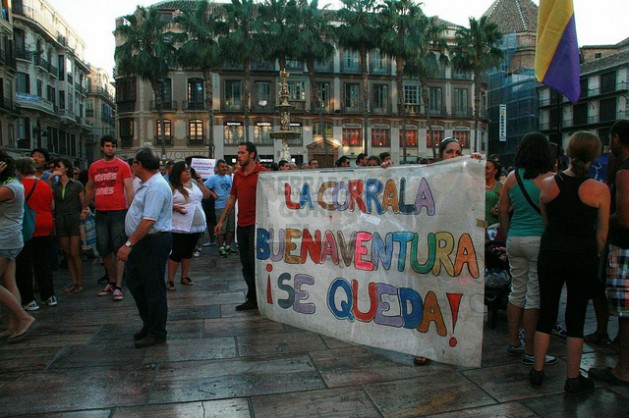 MALAGA, Spain, Jul 28 2013 (IPS) - “You live there for free, don’t you?” asked a woman as she passed by the Buenaventura “corrala”, a community in a building in this southern Spanish city occupied since February by families evicted from their homes for falling behind in their mortgage payments due to unemployment.

“We don’t want any handouts. We want to pay, through a social rent scheme,” replied 42-year-old Yuli Fajardo, who was living in a tent before she found shelter along with some 40 other people in one of the 13 spacious apartments in this four-storey block of flats in the central Malaga neighbourhood of La Trinidad.

Occupations by homeless families of vacant buildings owned by banks or real estate agencies have multiplied throughout Spain since the economic and financial crisis broke out in 2007.

But as a collective phenomenon, the new wave of squats started in the nearby city of Seville with Corrala Utopía, a block of 36 apartments belonging to a bank that has been occupied since May 2012 by around a hundred people, 40 of them children, Juanjo García of the 15-M (the May 15 “indignados” – Spain’s Occupy movement) housing committee in Seville province told IPS.

They call themselves “corralas” to indicate that they are community and neighbourhood associations, similar to the concept of the typical buildings of that name with common courtyards and services that proliferated in working class neighbourhoods in Madrid and other Spanish cities in the 16th to 19th centuries.

The National Institute of Statistics (INE) reports that there are some 3.5 million vacant housing units in this country of 47 million people – nearly 14 percent of the housing stock – mainly in the hands of banks. There were a total of 363,000 evictions because of mortgage arrears and foreclosures between 2008 and 2012, according to a report published in January by PAH.

Yanira, 20, and her 18-year-old boyfriend José were renting a house until they lost their jobs and took refuge in Buenaventura, one of the four corralas in Málaga.

Montse, who has an 11-year-old daughter, also lost her job and could not afford to pay for housing. Macarena, the most recent addition to the community, lives on the ground floor with her two small children, after her “alcoholic father threw us out on the street.”

“Do you think any of us would be here if we had an alternative?” asked Fajardo, who regrets the unsuccessful attempts to negotiate social rents with the bank that owns the building, and says that according to a Málaga court ruling, the corrala is due to be evicted on Oct. 3.

Buenaventura has just been sold by the bank to a private investor, lawyer José Cosín told IPS.

“We asked for an opportunity for marginalised, poor and socially excluded people to make a go of it. We carry our stigma like a brand on our skin, and we are judged by it,” said Fajardo, adding that “decent housing is a human right.”

The root of the problem, according to García, is “the commodification of the right to housing” during the construction boom that preceded the bursting of the real estate bubble five years ago.

There are now thousands of empty housing units and thousands of homeless people unable to make their mortgage payments because they were left jobless. The unemployment rate is 26.3 percent, according to INE figures for the second quarter of the year.

In Seville, 10 vacant buildings have been occupied by families that are being advised by 15-M. The squatters are unemployed, work in precarious jobs such as construction, are young people with good educational levels who have left their parents’ homes, or are over 65, García said.

“We are fighting for a roof over our children’s heads,” said 28-year-old Lidia Nieto, a member of the Las Luchadoras corrala in a new building in the La Goleta neighbourhood of Málaga belonging to a real estate company, which has been occupied since April by nine single mothers with their children.

Nieto lives on the ground floor of the apartment block with her eight-year-old son Yeray. She has a weekend job cleaning businesses and offices.

“We saw this empty building and decided to occupy it,” she told IPS while she chopped vegetables discarded by a nearby shop “because they are damaged and can’t be sold.” She used to live with one of her sisters and her parents.

“We saw ourselves living on the streets with our children. Do you think if we had proper jobs we would be living here? I’ve been unemployed for two years,” she said.

“Collective occupations are completely legitimate and are based on practical and ethical reasons,” said Iván Díaz of the Seville 15-M housing committee, at a conference in Málaga.

Squatters in new corralas are demanding that electricity and water meters be installed, so they can pay for utilities.

María, who lives next to Corrala Buenaventura, told IPS she is on good terms with the squatters. But the vendor at a nearby fruit shop said he had heard that some neighbours complained about noise at night.

The Málaga city government cut off water to Buenaventura on Jul. 18. But after the families protested by camping all night outside the town hall, the authorities re-established the water supply the next day.

The government of the autonomous region of Andalusía, where Málaga and Seville are located, approved a decree-law Apr. 12 on the social function of housing, establishing the need for a stock of social housing units.

This measure, appealed in July by the national government of rightwing Prime Minister Mariano Rajoy on the alleged grounds that it is unconstitutional, has benefited “only 12 families for three months,” complained García, who said it fell far short and was plagued with “flaws and defects.”

The European Commission – the EU executive arm – and the European Central Bank criticised the Andalusían anti-eviction decree, arguing that it could undermine the stability of the banking sector and economic recovery in Spain, according to a Jul. 10 report.