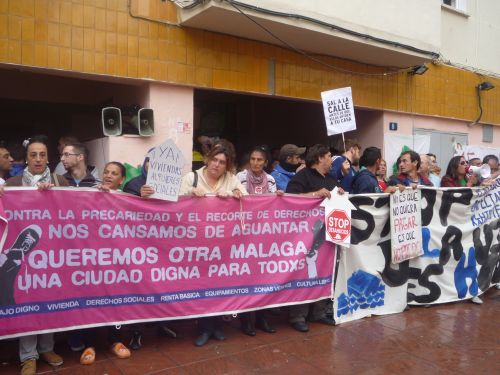 Activists and local residents protesting eviction of a Moroccan family on Oct. 24, 2012 in Málaga. Credit:Inés Benítez/IPS

MÁLAGA, Spain , Apr 23 2013 (IPS) - A new mortgage bill approved by Spain’s lower house of parliament would merely put a bandaid on the plight of people whose homes are being repossessed, and would not guarantee protection for most families facing eviction, activists complain.

The bill was passed Apr. 18 thanks to the votes of the right-wing governing Popular Party (PP), and is expected to make it through the Senate because the party also holds an absolute majority there.

Hundreds of thousands of families have been evicted since 2008 in crisis-stricken Spain, which has the highest unemployment rate in the EU – 26 percent.

The vote on the bill came after the European Court of Justice ruled Mar. 14 that Spain’s legislation was in breach of EU consumer protection laws because it did not allow judges to halt evictions, even if mortgage contracts contained unfair terms.

The verdict stated that judges must be granted the authority to delay repossession and eviction while reviewing mortgage contracts to determine whether they have “abusive” clauses.

The abusive terms referred to by the court ruling include late interest payments of 18 percent or evictions of homeowners after they have missed just one or two payments on a 30-year mortgage.

Under Spanish law, people must continue to pay off their mortgages, complete with interest and late fees, even after they have been evicted and their home – whose value is appraised by the bank itself – has been repossessed.

Several people who lost their homes or were on the verge of losing them have committed suicide in recent months, and the protest movement against evictions has ballooned.

The bill that has now gone to the Senate allows courts to suspend eviction for two years in certain cases where unfair mortgage terms have been identified, and sets a limit on late charges.

But it failed to respond to the main demand of the Platform for Mortgage Victims (PAH), a movement that collected 1.5 million signatures to demand that all defaulters be allowed to merely hand over the keys and walk away from the outstanding mortgage payments.

The petition, which also claimed that the change should be retroactive, was delivered to Congress on Feb. 12 as part of a Popular Legislative Initiative (ILP).

“This is a law to protect the banks,” Sara Vázquez, a lawyer with the PAH chapter in the southern city of Málaga, told IPS. “The public institutions have been taken hostage.”

The social movement accuses the government of distorting the ILP, which also called for a moratorium on evictions and the conversion of vacant housing in the hands of banks into affordable rental units.

The National Statistics Institute reports that there are 3.4 million vacant housing units in Spain – nearly 14 percent of all housing – and that most of these units are owned by banks.

The new law delays eviction for two years for low-income families who meet certain standards of vulnerability. It also forces banks to renegotiate the debt and agree to a discount of 35 percent if the homeowners pay off the loan in five years and 20 percent if they do so in 10 years.

But Vázquez said that “paying 65 percent of the debt in five years starting from the original date set for repossession is impossible for nearly all of the affected families.”

“The PP disappoints people and is not living up to what citizens are demanding when it approves a law that distorts the demands of the ILP,” PAH national spokeswoman Ada Colau told a public radio station. She said the bill “excludes most victims.”

But the government of Prime Minister Mariano Rajoy said it was “very satisfied” with the bill. After the vote in the lower house, Vicente Martínez, PP legislative spokesman on the economy, said the new law “was designed looking into the eyes of thousands of people…whose living conditions will now be improved.”

Vázquez, however, said banks in Spain “take advantage of the repossession procedure, which is illegal according to the European court ruling,” and has been “since 1993, when the EU consumer protection law was passed.”

Who is wondering about what has happened to the hundreds of thousands of families who have been evicted over the past few years without a chance to defend themselves from unfair terms in their mortgage contracts? she asked.

Meanwhile, judges have begun to apply the European Court of Justice ruling.

“Given the government’s failure to act, judges are moving ahead of the legislators,” José Cosín, a lawyer and activist with PAH Málaga, told IPS. He described the law as “a bandage on a mortal wound in the aorta.”

Judges in Málaga agreed Friday Apr. 19 to halt evictions in cases where unfair contract clauses have been found. The judiciary has set a May 8 deadline for courts nationwide to come up with unified criteria to apply the European Court of Justice verdict.

To foment the conversion of vacant housing to rental units, the government of the southern autonomous community of Andalusía, where Málaga province is located, approved a decree- law on Apr. 9 that slaps fines on banks, companies and individuals who do not release empty units for rent.

The decree-law also makes it possible to expropriate, for up to three years, housing units in the process of being repossessed, in the case of poor families who will be left in the street.

Of the 17 autonomous communities that make up Spain, Andalusía, governed by the opposition Spanish Socialist Workers Party (PSOE), has the second largest number of evictions, after Valencia in the east. Unemployment in Andalusía stands at nearly 36 percent, far above the national average.