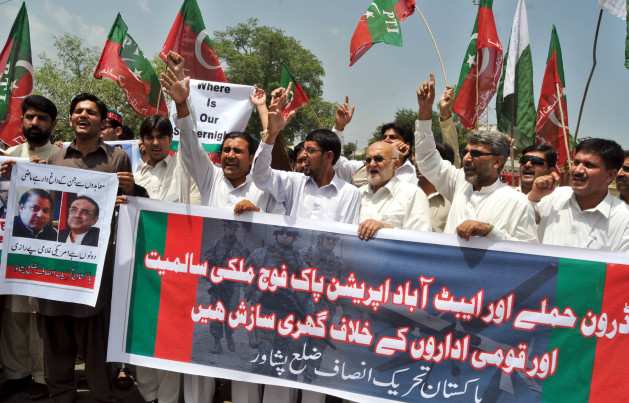 A protest in Peshawar challenges the legality of the drone strikes. Credit: Ashfaq Yusufzai/IPS.

“After the recent debate in international media about U.S-led drone attacks, there was some hope these illegal strikes would end,” Muhammad Bashir a dental surgeon from North Waziristan Agency, tells IPS.

"There’s no precise data about the civilians killed in these attacks because these took place near the Pak-Afghan border. It was not possible for media or the general public to visit the scenes.”

It is not just the Taliban who fear drone attacks. Bashir left North Waziristan a year back. He says they passed sleepless nights due to fear of drones that were meant to target terrorists. “Every day we see dozens of drone aircraft buzzing over people live in constant fear. There’s no precise data about the civilians killed in these attacks because these took place near the Pak-Afghan border. It was not possible for media or the general public to visit the scenes.”

But Pakistan’s ministry of defense told parliament Oct. 31  that only 67 civilians were among 2,227 people killed in 317 drone strikes in the Federally Administered Tribal Areas (FATA) since 2008. Pakistan had recently told the UN that at least 400 civilians had been killed in drone attacks since 2004.

The Pakistani defence ministry statement endorses the U.S. position that these attacks have killed only a few civilians. The government had been blaming the U.S. for breach of its sovereignty.

Bashir says the attacks don’t do any good, and only increase the number of U.S. enemies. Many people know relatives of drone victims, he says.

“The strikes cause fear in women and children as there is no guarantee that these missile will kill terrorists. These are more likely to destroy places located near the target.”

Isa Ahmed says he left his village in North Waziristan to live in nearby Bannu, one of the 25 districts of Khyber Pakhtunkhwa province, because of endless drone strikes and the militancy. Most people, he says, support the anti-drone campaign.

Former cricket captain Imran Khan who leads the Pakistan Tehreek Insaf Party (PTI) is a strong opponent of drone strikes. He says the people hope the drone strikes would end as a result of international pressure, not because Prime Minister Nawaz Sharif’s recent meeting with President Barack Obama. A global consensus is building that these attacks are against human rights and international law, he says.

“The government has been mandated by all political parties to stop drones at the All Parties Conference held on Sep. 27 but the prime minister isn’t interested in talks with Taliban,” he tells IPS.

The worst-affected is the Khyber Pakhtunkhwa (KP) province where Khan’s party rules. Most bomb and suicide attacks by the Taliban have been carried out here.

“The Taliban, who are based in based in FATA, are targeting people in adjacent KP. There’s an urgent need to talk to them for the sake of peace on the soil and protection of the people,” Khan says.

The Taliban have described these attacks as a weakness of the government. “The government must stop the drone attacks before peace talks with Taliban,” Taliban spokesman Shahidullah Shahid told media. Without ending these strikes, there will no dialogue, and attacks on the army and police will continue, he warned in a statement Oct. 10.

Najamul Islam, a teacher from North Waziristan Agency is hopeful that strikes will end. Reports by Human Rights Watch (HRW) and Amnesty International challenging the legality of U.S. drone strikes in Pakistan and Yemen have strengthened hopes.

“Prime Minister Nawaz Sharif is under scathing criticism for his failure to stop drone strikes in FATA,” says Islam. Sharif’s U.S. visit is seen as complete disappointment for local population, he says.

Not everyone is convinced by government figures that these attacks kill only a few civilians. A HRW documentary screened in Pakistan Oct. 26 says that only 47 terrorists were killed in drone attacks among a total of 1,500 surveyed.

The U.S. must be held accountable for drone killings, HRW says. “These unlawful killings could amount to war crimes on the part of the U.S.”