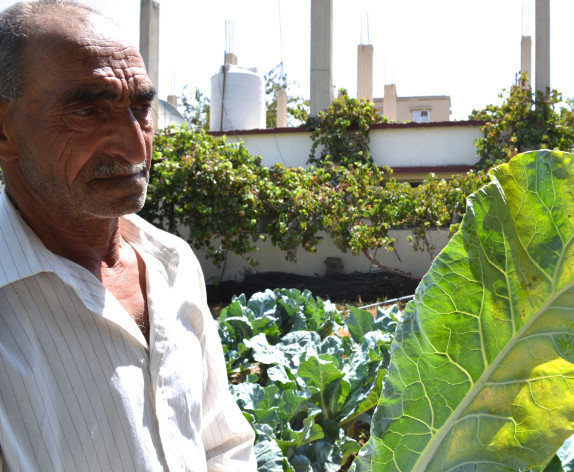 AMMAN, Jordan, Nov 5 2013 (IPS) - Abu Waleed isn’t quite sure where to begin his litany of grievances. Bugs that chomp their way through the mint he grows, or the dry well that forces him to pump water from a half kilometre away? Or perhaps the 160 dinars he spent on spinach seeds only to see scant growth after planting.

For the small community of farmers in the Zarqa river basin east of the capital Amman, industrial development, poor resource management and climate change have converged to create a perfect storm of problems that damage farmers’ produce and livelihoods and ultimately threaten food security in Jordan.

The Jordanian government and organisations from local NGOs to U.N. agencies are taking baby steps to mitigate the effects of climate change, but Abu Waleed and other farmers say these efforts are not enough.

Others suggest that while climate change exacerbates existing environmental problems in Jordan, the core of mitigation lies not in tackling climate change but in improving how Jordan consumes and manages the scant resources it does have.

Among the driest countries in the world, Jordan has an average of 145 cubic metres of water available per person annually (the water poverty line is 500 cubic metres). Its average annual precipitation is 111 millimetres.

Prime areas for agricultural cultivation, such as rain-fed areas, are shrinking, in part because of urbanisation and development. Between 1975 and 2007, according to research by Dr. Awni Taimeh from the University of Jordan, grain-cultivating areas decreased by 65 percent and vegetable-cultivating areas by 91 percent.

Farmers in Abu Waleed’s area have meanwhile noticed changes in weather in recent years. Along with a decrease in rainfall, temperatures have risen, leading to more pests and bugs and shifting growing seasons. They are calling on the government to help mitigate these effects. Some in the government too admit that it needs to do more.

Hussein Badarin from Jordan’s Ministry of Environment has worked in climate change policy for nearly two decades. He told IPS “there’s not enough coordination” among individuals and institutions working on climate change, A government ministry may for example need data that a university researcher has been compiling, yet neither knows the other exists.

Today, what remains of the Zarqa river could pass for a watery landfill. Plastic bottles, plates and trash bags float atop a green surface, and there’s no telling what lies beneath. The water itself is so polluted that farmers cannot use it for agriculture.

Instead, they must pump groundwater to water crops, says Suheib Khamaiseh, field coordinator for the Arab Women Organisation, a local partner for a project run by the International Union for the Conservation of Nature (IUCN) that enhances the ability of local communities in the basin to adapt to climate change.

But underground aquifers from which these farmers pump are being depleted at twice the rate at which they recharge, according to the World Food Programme and the United Nations Development Programme in Jordan.

According to an assessment carried out as part of the IUCN project, illegal “underground water pumping, rainfall shortage and high temperatures” all directly affect “underground water levels, water production quality, and soil quality.”

Abu Yazan, a soft-spoken farmer in Ruseifa in the Zarqa river basin, has installed a drip irrigation system that he says uses water more efficiently and increases production. He estimates that two dunams (.49 acres) of land with drip irrigation yield three tonnes of carrots, whereas the same amount of land with traditional watering techniques yields half that.

Rainfall has decreased, he says, and he has to filter pumped water before using it for irrigation. “We never used electric pumps like this in the past,” he adds as he turns on a pump that shoots water into a holding pool. He believes the government, or the municipality, should come every season and help clean up the area, yet neither does.

“The biggest problem is the water,” Abu Waleed, the farmer from neighbouring Khirbet al-Hadeed, declares. Not only is the quantity insufficient for agriculture, he says, but it also needs some pH (acidity/alkalinity level) adjustments. “You can’t taste it, but you can tell when you grow with it.”

Leading a tour through plots of vegetables, Abu Waleed points out the garlic with which he is experimenting. Certain plants have reacted poorly to rising temperatures, so he wants to test if the garlic can handle the heat.

Fifty years ago, garlic plants grew so high that “you could not walk,” he recalls. Now, they don’t reach past his thigh. From a separate plot he yanks a small radish the size of his pinkie finger out of the ground. Bugs have been eating the leaves of the radish plants, which then die, he says.

The bugs and pests “appear because of the heat,” says Abu Waleed, and they ruin both plants and produce. He has yet to find a way to successfully wipe out the bugs, even with pesticides. “The Ministry of Agriculture needs to do something.”

Beyond the direct impact of climate change on farmers like Abu Yazan and Abu Waleed is the issue of food security. About five percent of Jordan’s land is arable, according to Jordan’s first National Climate Change Policy,released earlier this year, but that amount is shrinking because of urbanisation, development and decreased precipitation.

As a result, Jordan’s self-sufficiency in certain foods is shrinking too. Although it grows enough of certain staple vegetables such as tomatoes and cucumbers to cover what the country consumes, it imports wheat, rice and barley. From growing 4.6 percent of the wheat consumed in 2005, it grew just 1.8 percent in 2011, according to the Department of Statistics.