ROME, Nov 11 2013 (IPS) - Eight decades ago, during the Great Depression, newly elected U.S. President Franklin Delano Roosevelt introduced the New Deal consisting of a number of mutually supporting initiatives of which the most prominent were: 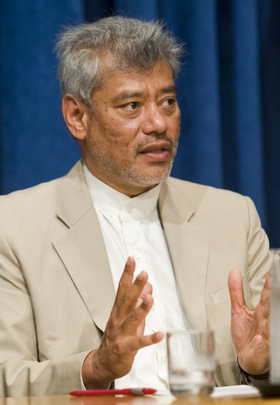 Today, we are in the midst of another protracted economic slowdown. The world needs a New Deal, which is both global and sustainable. The current system and crisis are global in nature, requiring a corresponding response.

It also has to be sustainable. We are in the midst of economic, social and environmental crises, with global warming looming larger. We are also threatened by pollution, natural resource degradation, loss of forests and biodiversity, as well as socio-political instability due to growing disparities.

The Global Green New Deal (GGND) should move all to a different, sustainable developmental pathway – in the spirit of Rio. The GGND should have ingredients similar to the original New Deal – namely public works employment, social protection, and increased productive investments for output and job recovery.

After half a decade of economic contraction and stagnation, with even developing countries slowing down recently, it is urgent to prioritise economic recovery measures, and not to expect recovery at the expense of others. The GGND should be part of a broader counter-cyclical response with three main elements.

After a half century of decline, except in the mid-1970s, real agricultural commodity prices were rising from about a decade ago. The recent price trend reflects yield growth slowing in recent years, while demand continued to grow rapidly. Rising incomes have increased food demand for humans and animal husbandry, while demand for biofuels has expanded rapidly in the last decade.

Higher and more volatile food prices threaten the food security and nutrition of billions. Prices were increasingly volatile for over half a decade, with successively higher peaks in 2007-08, 2010-11 and 2012. “Financialisation” – linking markets for commodity derivatives with other financial assets – also worsened price volatility.

Food security should be treated as a global public good since the political and social consequences of food insecurity has global ramifications. Hence, there should be a multilateral response to ensure food security.

The Green Revolution of the 1960s and 1970s – with considerable government and international not-for-profit support – greatly increased crop yields and food production, reducing hunger, starvation and poverty. However, efforts for wheat, maize and rice were not extended to other food crops.

Many other complementary interventions are urgently needed. Food security cannot be achieved without much better social protection. Resources are needed to strengthen social protection for billions in developing countries to ensure decent employment, food security and more sustainable development.

Clearly, the agenda for a Global Green New Deal requires not only bold new national developmental initiatives, but also far better and more equitable multilateral cooperation offered by a strong revival of the inclusive multilateralism of the United Nations system.

Jomo Kwame Sundaram is Assistant Director General and Coordinator for Economic and Social Development at the Food and Agriculture Organisation of the United Nations.