Spring Bursts Among the Toubou in Libya’s Desert 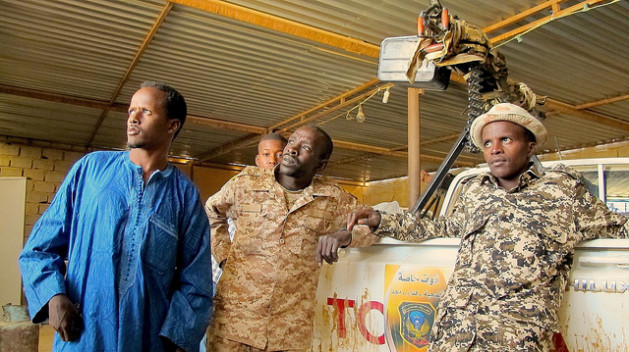 MURZUQ, Libya , Nov 26 2013 (IPS) - “Can there possibly be anything more satisfying than teaching your own language to your own people?” Abdel Salam Wahali remarked to IPS. He is a teacher of Tebu, an ancient language which is experiencing a boom in post-Gaddafi Libya.

“Lessons start at 5:00 PM and finish at 7:30 PM because the children go to school in the morning,” Wahali, 38, explained from Murzuq, about 800 kilometres south of Tripoli. “For the time being, formal education is taught in Arabic.”

Living in the inhospitable region crisscrossed by the borders of Libya, Chad and Niger, the Toubou were victims of Muammar Gaddafi´s (1969-2011) brutal Arabisation campaigns seeking to eliminate indigenous cultures and languages.

Many Toubou – whose ancient language is Tebu – were deprived of citizenship, which prevented them from getting healthcare, education and employment.

“Ours is a race against the clock for which we do not have any help from the Libyan government. Still, we are pleased with the results so far,” said Wahali, who also teaches French.

Adam Rami Kerki, the leader of the Toubou National Assembly – the main political organisation for members of this ethnic group in Libya – told IPS from his office in downtown Tripoli: “While today we don´t suffer persecution, the current Libyan government insists on identifying Libya as an ‘Arab’ country, just as Gaddafi did.

“What makes you an Arab? Is it the colour of your skin? Your religion? Your mother tongue? For us one thing is clear: we may not be Arabs but we are Libyans. In fact, traces of human habitation have been found in our region dating back to 30,000 years ago,” added the senior representative, while he underlined the stigma that being black still poses in Libya.

Two years after Gaddafi’s death, the country as a whole is suffering from chronic instability, which recently peaked after the dramatic episodes of violence on Nov. 15, when dozens were killed and hundreds injured after a peaceful march was broken up through the indiscriminate use of force.

The Toubou are watching what is happening in Libya from a distance, hoping that their own militia will be able to react against any possible aggression.

They are all too aware that stability in the region is key to being able to jump on the train to the 21st century.

One of the stops in this merciless desert is the social centre run by “The Sons of the Sahara”, the leading organisation for the cultural awakening of this community. From its headquarters in downtown Murzuq, volunteers teach English and French, as well as Internet courses.

Hassan Egi is one of the group’s coordinators. He stresses the importance of access to the Internet for what he describes as “the most inhospitable region of one of the most isolated countries on earth.

“We Libyans thought we lived in the best country in the world until 1997, when satellite television arrived. The Internet is like a new revolution for us,” the 31-year-old explains to IPS while he strolls among the ten computer terminals.

Adam Kukin is using one of them. At 14, he is able to herd 100 camels across the Sahara desert. But unlike his parents, he can also read and write in his own language. And he is also increasingly familiar with online social networks.

“Thanks to the Internet I know what’s happening in the Murzuq area, and way beyond,” says the teenager.

The Toubou “spring” is very much transcending the four walls of the classroom and the cultural centre and spreading across the southwestern Libyan region of Fezzan, or Zalaa in the Tebu language, thanks partly to publications such as the Sodur Zalaa (The Echo of Zalaa) newspaper or the Labara Zalaa (News of Zalaa) magazine.

The latter was launched just as Gaddafi lost his grip over the south, like almost everything else involved in the renaissance of Toubou culture.

“We started printing 500 copies in August 2011 and today we are releasing 2,000 every month,” Ahmed Kuki, the publication’s proud promoter and editor, told IPS.

In its latest issue, Labara Zalaa offers news, interviews, crossword puzzles, song lyrics and even a report from the very heart of the Toubou cultural movement, across the border in the Tibesti mountains of northern Chad.

“We owe Kandamai a lot. None of this would have been possible without his passionate work and the morale boost he has given us,” says Kuki.

Kandamai – which means “ambitious” in the Tebu language – is the name by which the Toubou know Mark Ortman, a linguist from the U.S. who settled in Chad’s Toubou region 20 years ago. His aim was to start a language programme in order to reduce the local language to a written form and develop literacy in Tebu.

“I chose an adaptation of the Latin alphabet as the national language in Chad is French, and it also serves as a bridge into English, which the Toubou in all three countries want to learn,” Ortman told IPS on the phone from the other side of the border, where he is based with his wife and five children. The youngest one, he said, was born in Chad.

Ortman said the future of Libya’s Toubou people depends on to what extent they are able “to continue to avoid assimilation into the Arab worldview and maintain their historical distinctives and culture.”

So far, the strong will of this desert people seems more than proven, partly thanks to the bold initiative of this family which has also reshaped their life.

“Our children essentially grew up among the Toubou and attended local primary school with them,” Ortman said.

“We became a part of this people, and the more we learned about and understood them, the more we believed they share many of the same values as we do, including freedom of religion, separation of church and state, and democracy in the sense that people should be free to choose to live as they want,” explained the man who is helping a long neglected people to write their story. Some may well say he is even part of it.